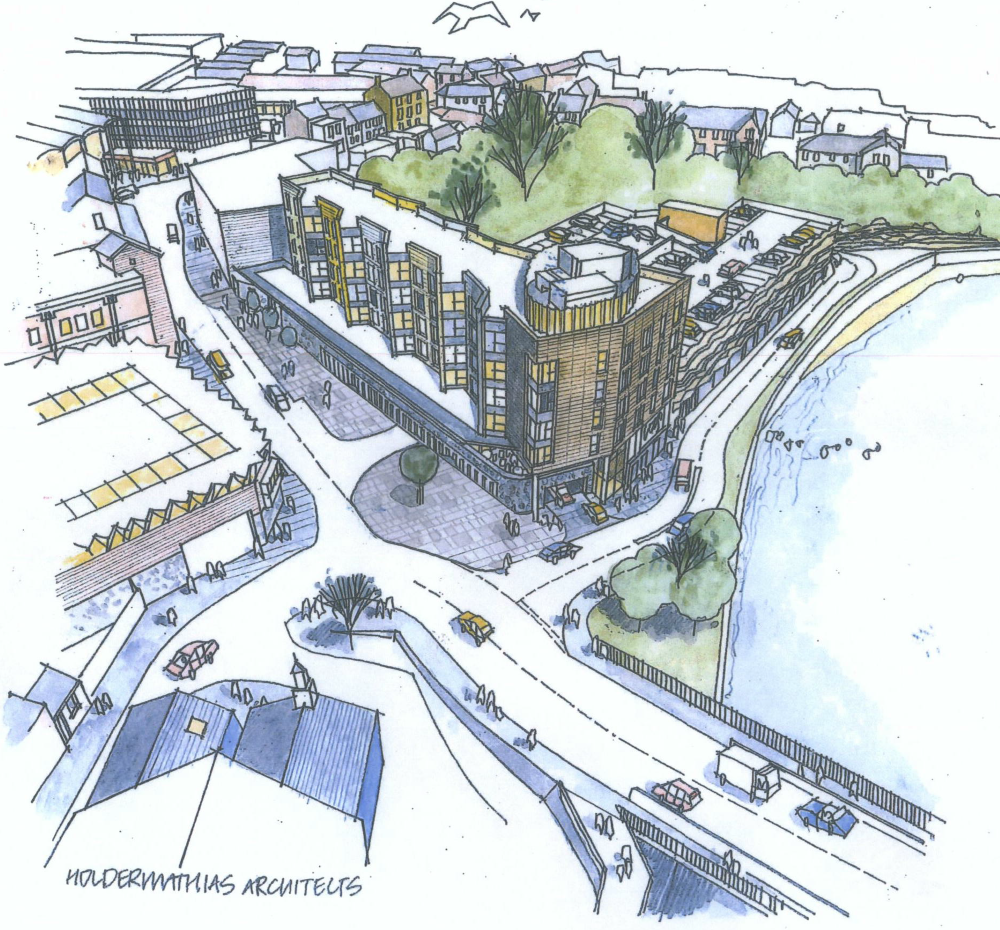 We’ve known for a while that some sort of development would take place at The Rhiw, and it was subject to a bid from Bridgend Council (BCBC) for Welsh Government Vibrant and Viable Places funding (Vibrant & Viable Bridgend?). BCBC were eventually awarded around £6million, which is significantly less than they wanted.

The Rhiw car park is nearing the end of its design life and is rumoured to have “concrete cancer“ – something that blights 60s & 70s brutalist architecture. The area has long been eyed up for a major extension to the Rhiw Shopping Centre and a department store. None of that happened, though the area was included as a ripe development zone in the town centre masterplan produced for BCBC back in 2011. Earlier this week, Swansea-based Coastal Housing submitted a joint application with BCBC for a mixed-use five-storey development of apartments, a replacement multi-storey car park and a retail unit.Key points:
Reaction and Impressions
In some ways this is a blast from the past, as the old Ogwr Borough Council used to have a base in a grim tower block above the Rhiw Centre, which was partially demolished during a redevelopment in the early 90s. I suppose the tower block is making a comeback.It’s pathetic to be saying this but – street regeneration works aside – this is arguably the most significant single development in Bridgend town centre for years. Bridgend really missed the boat in not pushing harder for a Rhiw Shopping Centre extension in the early noughties, and the town centre is suffering because of that.

Businesses have had to put up with major roadwork projects coming one after the other for what seems like a decade now, and from all press reports over the last several months, few are happy with the prospect of one of the major car parks closing temporarily.It’ll cause disruption in the town centre for maybe up to 18 months. Most people will accept having to rebuild the car park; the problem is a lack of suitable temporary alternatives nearby. It’s unclear whether other car parks around the town centre will be able to pick up the slack.

The principle of a mixed use development like this is sound enough. There’s a lack of one and two bedroom homes in Bridgend and an apartment scheme could make the town centre feel denser, which could – in time – lead to similar developments elsewhere. For example, there are/were outline plans for a similar development at the Bridgend Shopping Centre facing ASDA, but nothing’s happened yet.

Other sites in and around the town centre are likely to be redeveloped in the future, including the Cheapside police station, Brackla Street Car Park/BT Offices, Bridgend Council’s Sunnyside Offices (which are up for sale), and maybe, in the long-term, the Brewery Field.

There’s also the question of what will happen at the JP Board building (which backs on to the car park, opposite Wilkinsons). It’s currently in the process of being demolished for a surface car park (Car Parks & Recreation), but something else will have to go there too in the medium-term.