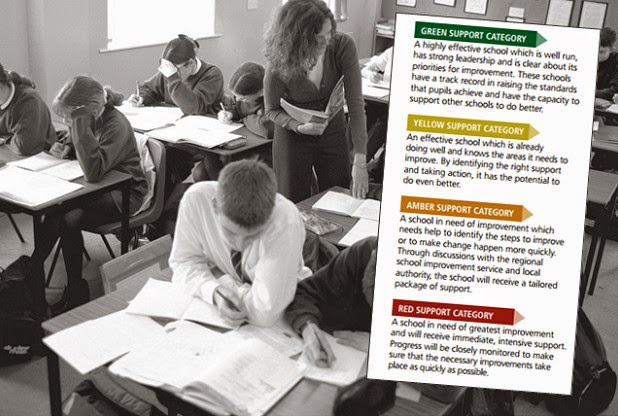 Last week, the Welsh Government unveiled the first school rankings using a new “traffic light” system, which replaces the old system of school bandings.It ranks primary and secondary school in order to determine which schools are out-performing or under-performing compared to schools across the whole of Wales. Y Cneifiwr gives the picture in Carmarthenshire.

The factors taken into consideration include : performance in core subjects like English, Welsh (in Welsh-medium schools) and maths; the number of pupils who leave secondary school with at least 5 GCSE’s grades A*-C, attendance figures and the performance of pupils who receive free school meals.

After the results are collated, each school is placed into one of four categories.

*Ysgol Gyfun Gymraeg Llangynwyd wasn’t included, but I presume that’s because the school doesn’t have the three consecutive years of GCSE results needed to measure performance. St Clare’s wasn’t included either as it’s a private school. 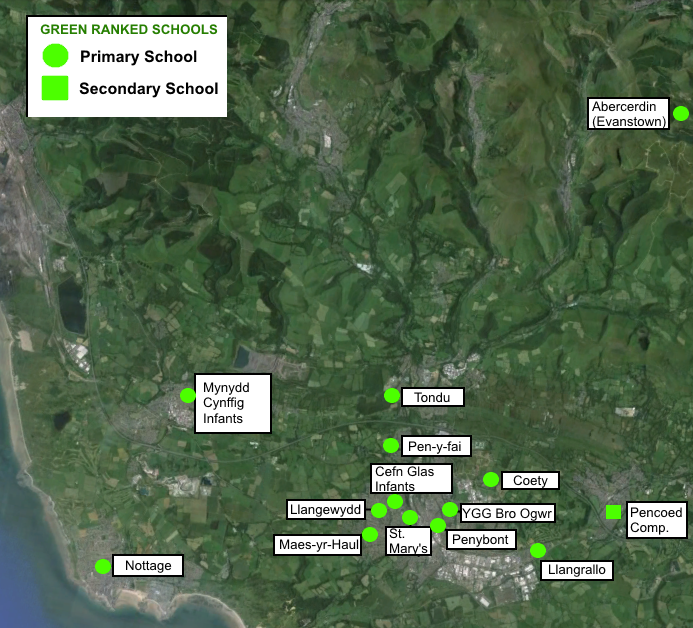 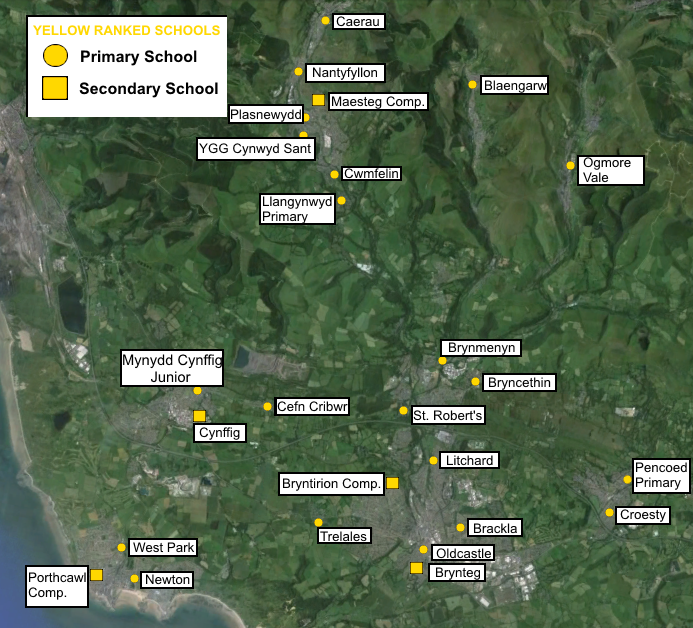 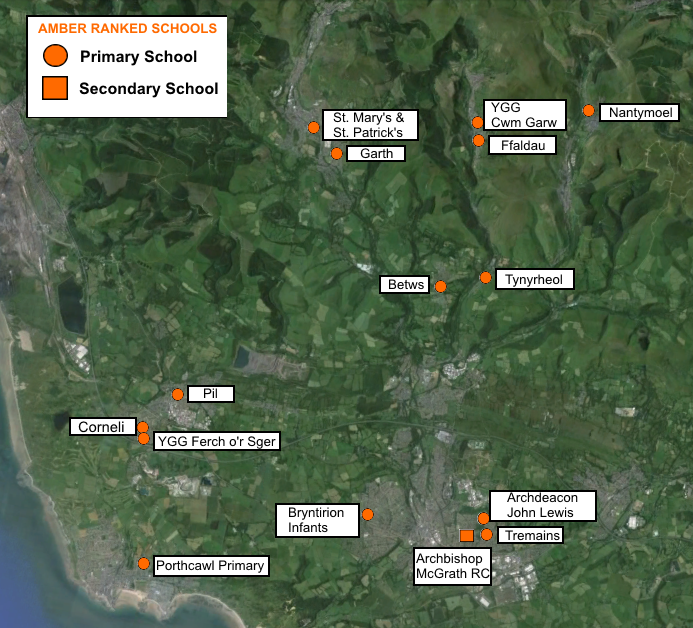 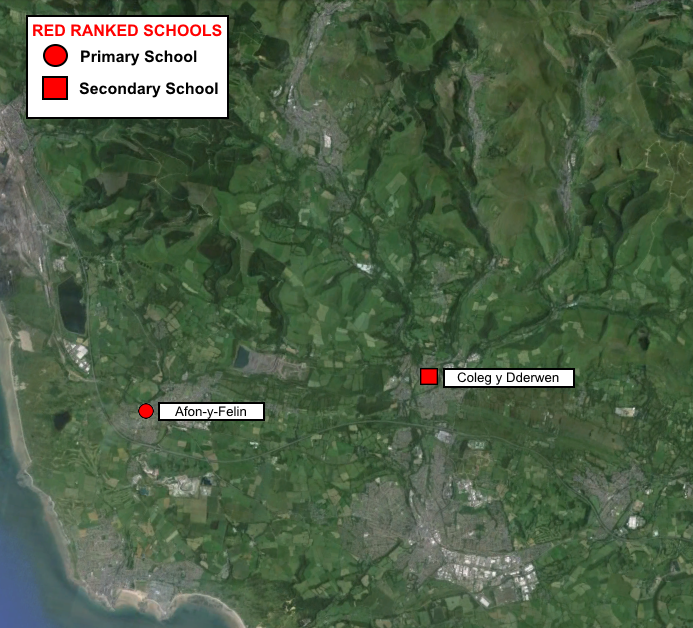 At a fundamental level, there’s no difference between this and school banding, though a traffic light system is a lot easier to understand : green good, red bad.

As I said, it’s (broadly-speaking) good news for schools in Bridgend county; though there are warnings against complacency, namely the large number of amber-ranked schools which could easily slip down to red if they don’t get the right assistance.

Llynfi Valley schools come off relatively well too, and are probably performing above expectations when compared to similar areas around Wales. The only other thing that stands out is that, with a few surprising exceptions like Tremains Primary and Archdeacon John Lewis School, schools in and around Bridgend town itself are performing well on the whole.

In terms of the disappointments, clearly there are serious issues at two secondary schools – Archbishop McGrath Catholic School in Brackla and Coleg Cymunedol y Dderwen in Ynysawdre. This is particularly embarrassing for Bridgend Council because a combined £59million has been spent over the last 4-5 years on two flagship campuses, while Archbishop McGrath were caught up in an exam scandallast summer.

The catchment areas for the two red-ranked schools – Coleg y Dderwen (Sarn, Tondu, Bryncethin, Garw and Ogmore valleys) and Afon-y-Felin Primary in North Cornelly (Marlas estate) – are relatively deprived (Bridgend’s Deprivation Mapped). Under-performance there reinforces the fact that deprivation continues to be a leading cause of low attainment. No amount of flashy new-build schools, new teaching methods or grants will change that. The whole economy has to change.

The problem with having“banding” like this is that results from one year to the next are going to fluctuate. There’s no guarantee that good schools will remain in the higher bands, even if they do all they can to maintain their position. Meanwhile, secondary schools ranked “red” could rise one or two categories off the back of a good set of GCSE results in a single year.

Teachers’ unions and education bodies have, as you might expect, not welcomed the new system for largely same reasons they opposed banding. This time, however, there’s a specific concern over the benchmarks that need to be hit in order to be ranked green. Schools where pupils entitled to free school meals perform below the national average are barred from the highest category even if results elsewhere prove they’re doing well.

I suppose the logic is that it will challenge schools with high percentages of free school meal entitlement to improve standards for the most deprived pupils. That’s reasonable enough, though according to reports in the Western Mail last week, teaching bodies are concerned this will lead to schools being “trapped in intervention” for longer than is necessary.

It’s worth a shot I suppose, but I doubt teachers will be happy with any sort of league table or ranking system.

Yesterday, Cllr. Luke Ellis – who represents Pyle on Bridgend Council and previously worked as a senior aide to the First Minister – announced he had left the Labour Party.

He said this was due to disillusionment with Welsh Labour’s health policy and their treatment of outspoken critic, Ann Clwyd MP (Lab, Cynon Valley) – more background at NHS Wales : Who watches the watchers?

PIE lobbied for “paedophile rights” through the 1970s and 1980s, and work the NCCL undertook for PIE has come under the spotlight due to Operation Yewtree, Operation Pallial (the Bryn Estyn children’s home scandal) and the ongoing Westminster child abuse ring scandal.

In what reads as years of pent up frustration with a party he clearly feels has lost its way, Luke describes Labour as a “cult-like mafia that is frightened of free speech”, throwing in some criticism of Ed Miliband’s leadership for good measure.

It’s fair to say Luke is no stranger to controversy (you can certainly argue that Carwyn Jones is, to his credit, an incredibly patient boss) – and this won’t have any political implications for Bridgend Council itself as Labour have a commanding majority of seats.

Despite that, Luke’s one of the more high-profile and politically-experienced councillors in Bridgend and is likely to have support for his decision locally, perhaps nationally too.

Cllr. Ellis has subsequently launched a new blog called Platform V and a new twitter account @PlatformV, which I’m sure many people reading this in Bridgend, and elsewhere, will want to follow.