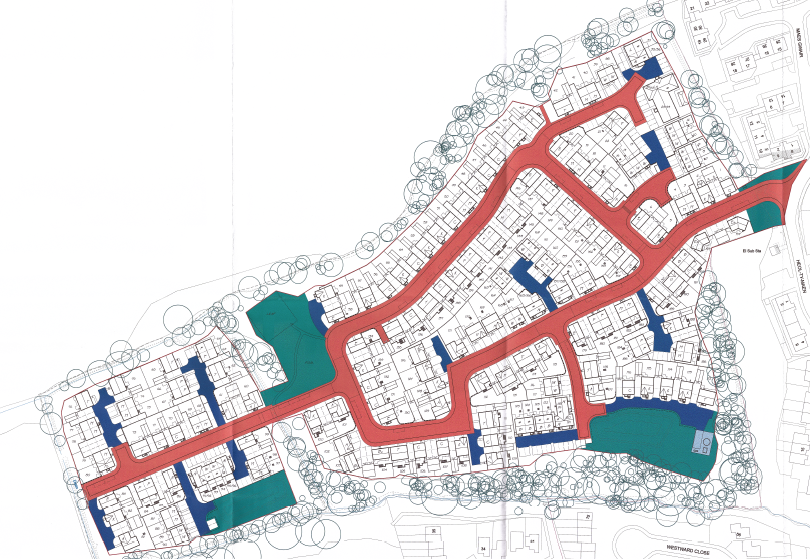 More details have emerged regarding a major housing development off Heol Ty Maen and Barnes Avenue in the Llangewydd Court area of Bridgend (link).

The development is being taken forward by Barratt and an outline planning application for 165 units was approved by BCBC’s Planning Committee in October 2016, despite local opposition.

Since then, however, the plans have changed with an increase in the number of units to 194 and the removal of a proposed pedestrian/cycle route between the development and Westward Close.

There’s nothing unusual about that, but it’s worth flagging one particular detail.

Many new housing developments don’t use traditional street layouts, instead using so-called private lanes and shared drives outside houses (presumably because they can fit more houses into a development). These are often narrow, don’t have tarmac surfaces (or tarmac surfaces made to look like bricks) and are built in such a way that they can’t be adopted by local authorities. If you want to see examples of this style there are plenty at Parc Derwen.

This development will have them too. As these drives and unadopted roads can’t be maintained by the local authority, housebuilders often set up management companies to maintain these drives and open spaces, charging residents a service fee/ground rent.

So you may have taken out a big mortgage, own the freehold on the property, pay council tax, yet on top of that have to pay ground rent – something that’s been described as “fleeceholds”.

There’ve been two recent debates on this in the National Assembly (Unadopted Roads, “Fleeceholds“) and, in both cases, there’ve been commitments from Welsh Government ministers to look at the issue.

That’s probably going to be too late for this development, but when this application (and others of a similar size) goes to the Planning Committee it’s a point councillors may want to raise with the developers and officers.