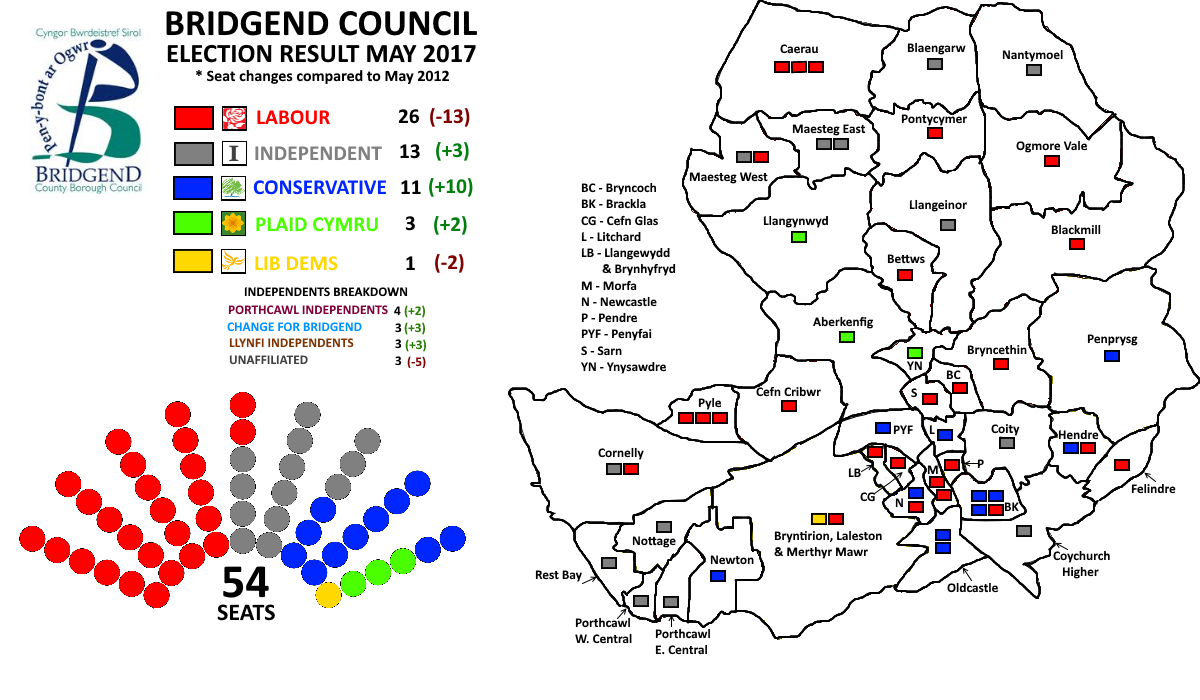 After the doorstopping, leaflet posting and Facebook rants, voters have elected a new Bridgend County Borough Council – the result is above.

My“projection” wasn’t that far off in the end.

Turnout was reportedly just under 40% – higher than 2012, but still very poor.

Congratulations to everyone who was elected or re-elected. Commiserations to those of you who missed out. Politics can be a very “chew you up, spit you out” game, and here’s a list of the sitting councillors who lost their seats, including some senior figures: 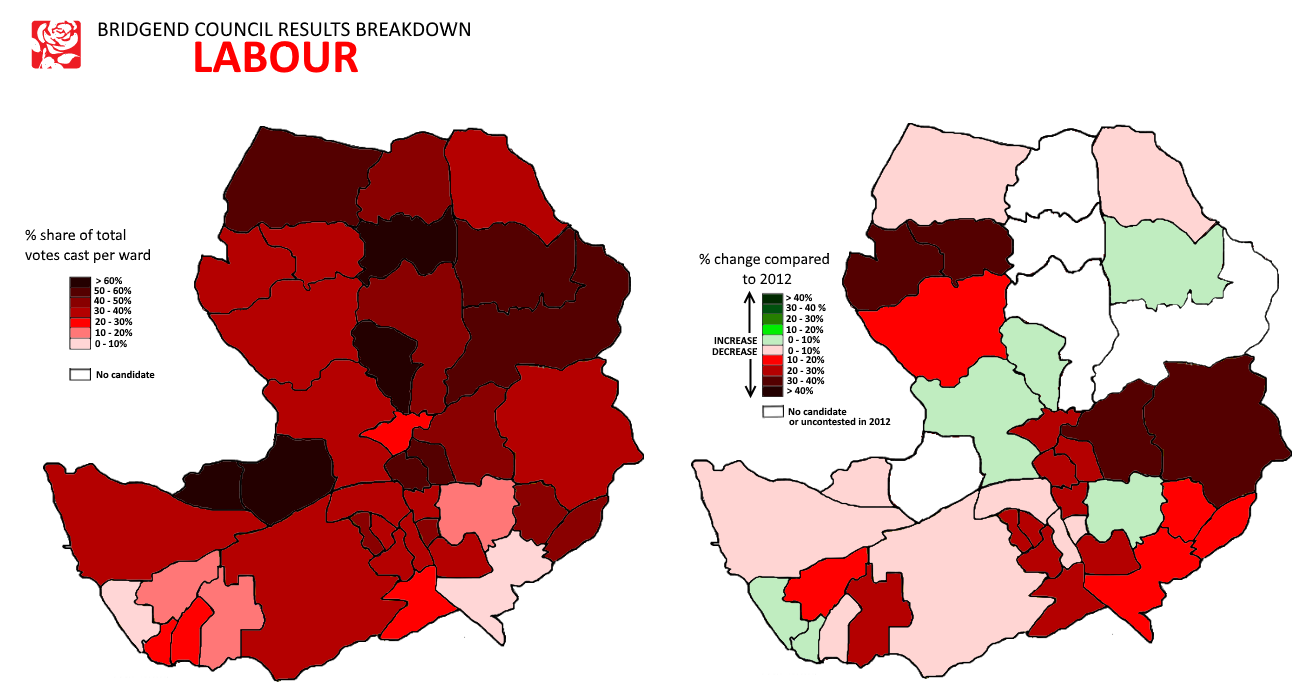 It’s Labour’s worst result in Bridgend since 2004, losing 13 seats and seeing their vote share drop by an eye-watering 15.7%. Labour were trying to fight on multiple fronts and by and large they held their lines, but you can see where it didn’t: Maesteg, Brackla – which produced one of the shock results of the night with the loss of former cabinet member, Hailey Townsend – and a few seats in the Garw Valley.

Clearly they have a serious problem in the towns/urban areas and the only thing that saved them was the vote-splitting caused by large numbers of opposing candidates. If that hadn’t have happened, Labour could’ve easily been looking at 20 or fewer seats.

There are some bright spots. They held all three seats in Pyle and Caerau – the latter being a particularly good result considering the pressure put on them by the Llynfi Independents. They also managed to (re)take both seats in Morfa for the first time in a long time, and held off Change for Bridgend’s Tim Wood in Newcastle by just 9 votes (and many other places too).

It seems they took their eye off the ball when it came to Plaid’s performance in the Ynysawdre/Aberkenfig area and the strength of the Tory vote in Bridgend itself. There may well have been a bit of “Nobody here would ever vote Plaid or Tory” arrogance on Labour’s part. Add to that Janice Gregory’s clunking fists with regard the “purge” and the big issue of the election that everyone in Labour seems to have dismissed too easily….rubbish collections.

It’s not a complete disaster, but they can’t spin this as a positive and activists will need to work their backsides off over the next five weeks to prevent Bridgend going to the Tories in June. 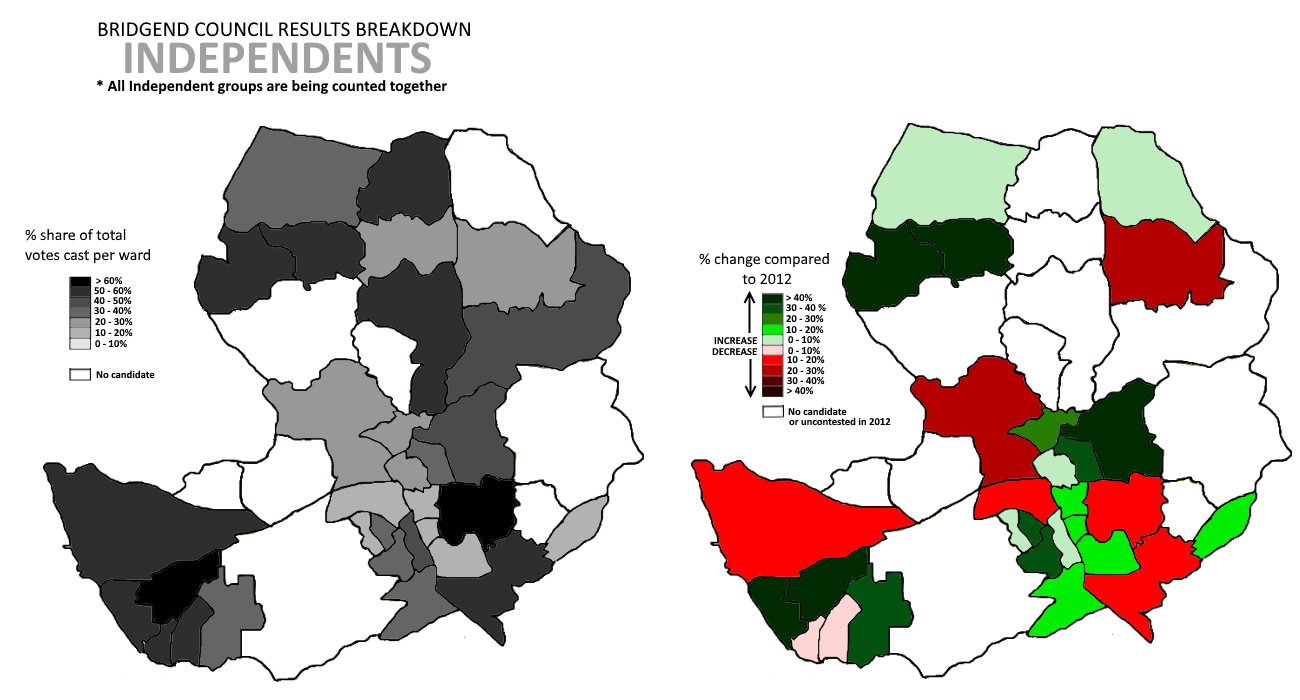 A mixed bag for the Independent candidates.They more than doubled the number of votes cast for them – rising from just under 10,000 votes in 2012 to just under 20,000 in 2017 – but I suspect they’re victims of the electoral system.As expected the Porthcawl Independents doubled their number – though they couldn’t quite make it a clean sweep in the town.

The Llynfi Independents pulled off a good result in Maesteg East, taking both seats (in addition to one in Maesteg West) – but they failed to win any seats in Caerau which must count as a disappointment.

Change for Bridgend candidates received more votes (~6,100) than Plaid Cymru and the Lib Dems combined and come away with three seats – two of them in straight fights with Labour, one a more impressive victory for Amanda Williams in Coity who’s unseated the unaffiliated Independent, Ella Dodd.

If they didn’t have to contend with paper Tory candidates and unaffiliated Independents, Change for Bridgend could’ve won 5 or 6 seats and went very close in Newcastle as said. Considering this is their first serious go, to win three seats isn’t bad at all with the prospect of more good news as the town and community council results come in.

The victims were the unaffiliated Independents. Many familiar names – like the aforementioned Ella Dodd, Peter Foley, Edith Hughes, Haydn Morgan – are now gone. Maybe social media played its part, with the “groups”seemingly much more tech and media savvy than the “old heads”. 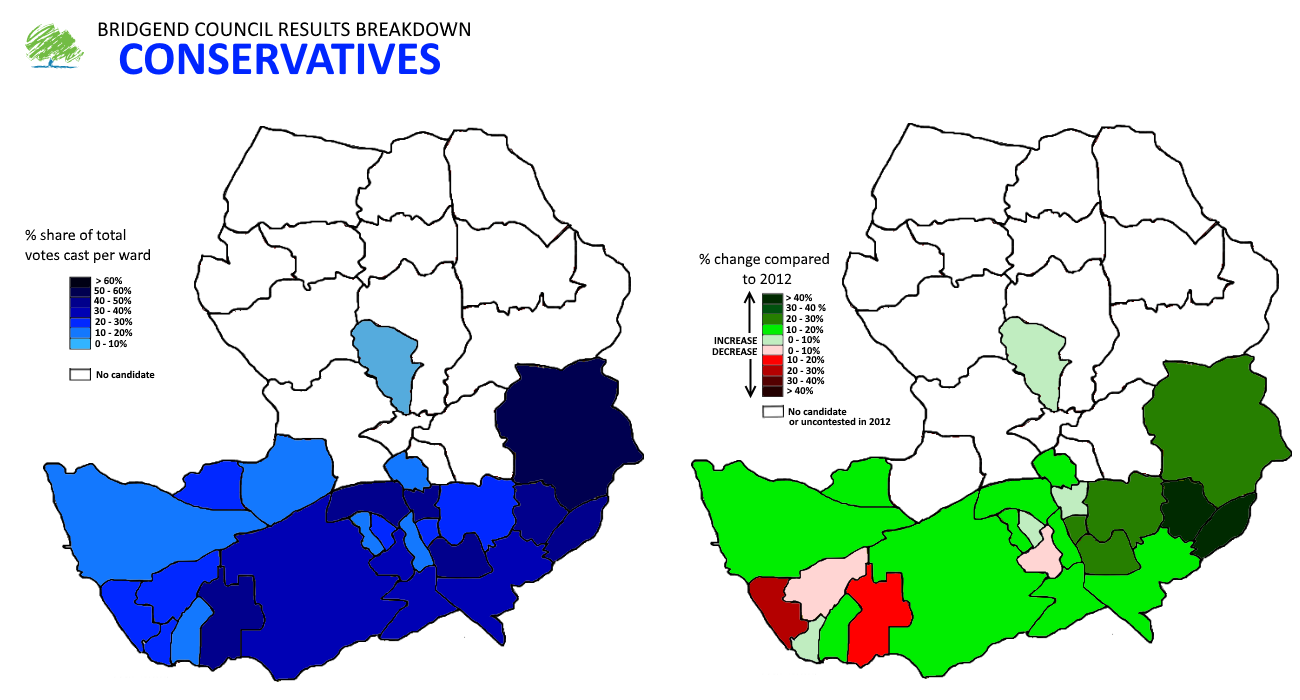 The Conservatives will have plenty to smile about today. Safe to say they’ve exceeded all expectations and put 2012’s disappointment behind them.By my count this is their best result since Bridgend county was established in 1996, taking 11 seats and 29.4% of all the votes cast (+11.7% compared to 2012).The places you would’ve expected to vote Tory – the wealthier suburbs and districts of Bridgend, Penyfai, Porthcawl – did so; but the surprising thing is the big presence the Tories are building in Pencoed (which is in the safe Labour Ogmore constituency before anyone gets too excited).

The big question I’m sure on everyone’s lips is, “What can we take from this with an eye on June’s UK general election?”

Not much to be honest. This election was fought on local issues (as a nice change) and I don’t think you can read into these results to get an idea of how things might play out in Bridgend come June. Will it boost Tory morale? Definitely, and at the moment I’d say it’s more likely than not that Labour will lose Bridgend – but this might well be the wake-up call Labour need to get boots on the ground. 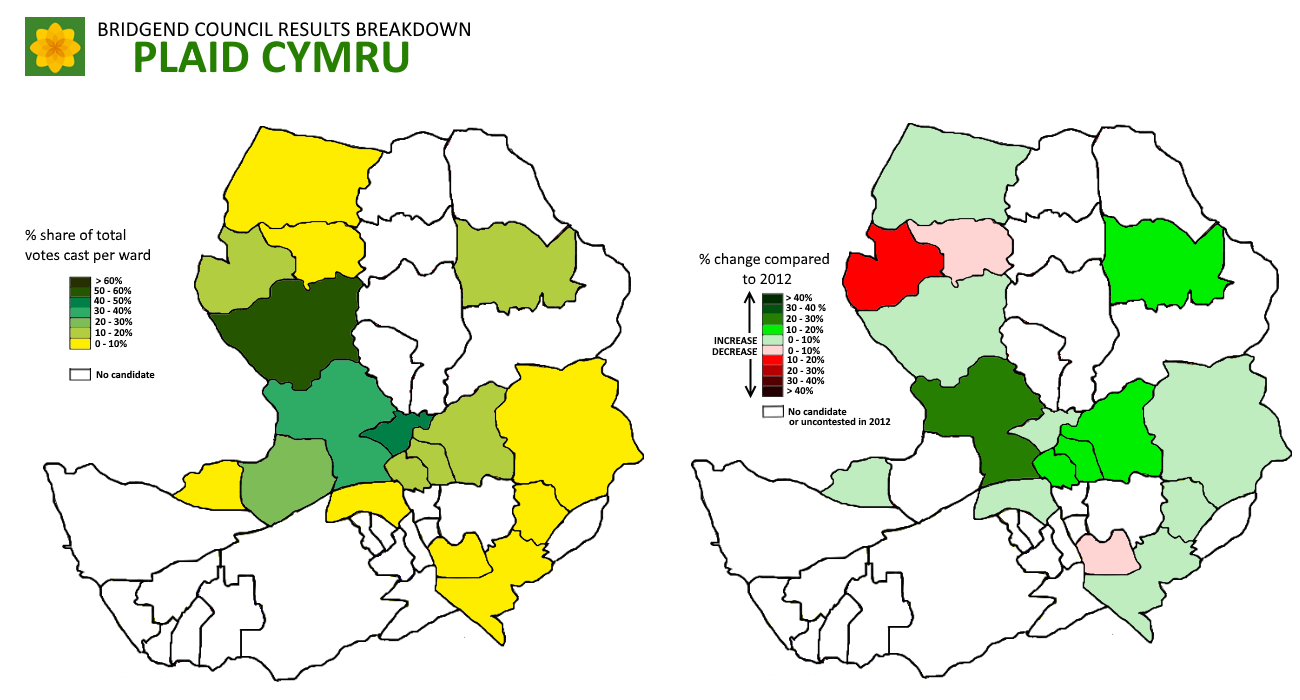 By Plaid Cymru standards in Bridgend this is a great result. Not quite a major breakthrough, but significant. I think it might be their best ever result in terms of seats won (or at the very least matches it).Plaid have run a very targeted campaign aimed at the “Valleys Gateway” area (Tondu/Sarn/Bryncethin) for some time now and it’s finally paid dividends. Tim Thomas and James Radcliffe (via recount) will both join Malcolm James in the council chamber and, for Tim in particular, his patience has paid off. The only clouds are that their percentage of the total vote actually fell slightly (-0.9%), while their performance in some seats would otherwise be considered poor with only double-figure vote returns. Maybe resources and time would’ve been better spent elsewhere. However, with better targeting and better support this is a result Plaid can certainly build upon.

Due to the low number of candidates and share of the vote I won’t be doing any graphics/maps for the following.

I’m starting to get tired of saying this, but it was a bad night for the Lib Dems. Only Cheryl Green is returned (as expected). The only crumbs of comfort I can think of is that Cheryl topped the poll in Bryntirion and the Lib Dems finished second in Llangewydd & Brynhyfryd.

The Greens put up fewer candidates and, as you might expect, those they did put up didn’t perform spectacularly. They can comfort themselves with some guaranteed seats at town and community council level.

UKIP did bugger all (though Glenda Davies did out-poll the Tories in Bettws), as did Bridgend’s resident perennial neo-Nazi candidate.

The first meeting of the full council won’t take place until May 17th, so it’s going to be a short while until we know for certain who’ll be running Bridgend Council. As for the options: