My coverage of the 2017 local elections draws to a close with the most important post of all: What are the parties/groups promising to do for Bridgend?

I’ll list some key policies each group are proposing (where applicable) and I’ll also give a projection for what the outcome might be on Thursday.

Here’s a final reminder of who’s standing in each ward.

Labour are the establishment party in Bridgend – thanks to a sizable core vote (or if you were more cynical, “donkey vote”) in the Ogmore constituency wards (and a few south of the M4 as well).With a credible threat from the Tories in the Bridgend constituency in June’s General Election, the onus will be on Labour to retain control of the council. They do wobble when put under pressure amidst local controversies – see Porthcawl in 2012. However, Bridgend Labour have only lost control of Bridgend county once, between 2004-2008 to a rainbow coalition.

In terms of policies, there’s an argument they haven’t put forward anything new and are just re-announcing policies they’re already agreed or committed to (like rubbish collections, extra care and the South Wales Metro). Far from offering change they’re offering more of the same and it all sounds a bit lacklustre, perhaps hoping that voters will vote for personalities and the “Devil they know” instead of hard policies.

My gut feeling is Labour aren’t the sure bet they think they are but the smart money will be on Labour retaining control of the council unless there’s a mass desertion of traditional voters (for reasons I’ll explain later).

The first big test for the party as to whether “the fightback” is real, or a mirage….and the Lib Dems have fluffed it, failing to defend two of their seats, including the loss of Norah Clarke who’s now running as an Independent in Nottage.The only Lib Dem heartlands in the county are/were Porthcawl and the western half of Bridgend town (they’ve won seats in Morfa and elsewhere before). With their only real chance of any success being Cheryl Green retaining her seat (or pulling off a double in Laleston with Ian Spiller) it’s not looking good and that opens the doors to others.

It’s a pretty limp, if practical, set of proposals. I was expecting them to put up more of a fight, but in many respects it’s sensible to focus resources on seats they stand a realistic chance in than put up paper candidates. It’s worth reminding everyone that the party led the council less than 10 years ago, now they’re an endangered species.

The Tories had a disastrous result in 2012, retaining a single councillor in Ken Watts (Newton). They could usually count on a strong vote in parts of Bridgend town itself, Brackla and Porthcawl – reflected in the large number of community councillors – but for some reason support disintegrated. Is that support about to come back?In recent weeks they’ve emerged as the strongest challenger to Labour nationally and at UK level, but will that extend to the local elections? Some of the policies are the sort of thing you would expect – like freezing council tax, introducing free car parking with a dash of populism by opposing the new waste collection contract; but have Change for Bridgend – who they’ve written off – stolen their thunder?

Suzy Davies AM (Con, South Wales West) has vocally campaigned on issues affecting Bridgend and Porthcawl for several years. This could prove crucial in the fight to prevent votes slipping to Independents and, with more candidates, could swing some contests in the Tory’s favour.

Plaid’s set of policies generally chimes in with what they’re proposing nationally, with the final one on housing developments targeted at voters in Ynysawdre and Aberkenfig specifically – which is where Plaid have focused their campaign.When you compare Plaid’s performances in Bridgend to neighbouring local authorities like Neath Port Talbot, Vale of Glamorgan and Rhondda Cynon Taf it’s not great; but after putting up more candidates than ever before in 2012 they’ve aimed to build on that with Leanne Wood addressing what appears to have been a well-attended public meeting in Tondu a few weeks ago.

Plaid are going to have to be patient. Bridgend isn’t natural Plaid territory, but to their credit they’ve put up a good number of candidates this year – completely outstripping UKIP and the Lib Dems – but it probably won’t be enough to out-do the Independents.

Malcolm James aside, Tim Thomas is the closest thing to a senior local Plaid personality. Despite his lack of electoral success to date he’s made an impact – webcasting of council meetings come about partly because of pressure he put on BCBC. He stands a chance in Ynysawdre (and James Radcliffe in Aberkenfig), but Llangynwyd’s the only sure-fire Plaid-leaning ward in the county. Two seats would be a good result, three would be great.

The new kids on the block, who’ve ruffled more than a few feathers along the way and are perhaps the most interesting political development in Bridgend for a long time. The self-described “Facebook moaners” put their money where their mouths are and are standing a commendable 23 Independent candidates for county seats and almost double that for town and community councils. This has all happened in the space of about 6-8 months and they’ve garnered support from former Conservative, Labour, Lib Dem and UKIP members, councillors and candidates.

They’ve produced a fairly comprehensive 50-point “manifesto”, though some of it comes across as a bit“buzzword bingo”. There are no major contradictions, but they’ve faced accusations (from Labour and Tories) of not being in a position to provide a coherent programme – when they’ve actually produced the most comprehensive programme of anyone standing!

Although they’re already guaranteed seats at town and community council level, I don’t think they should be expecting miracles at county level as some of the contests may prove difficult, but if things go their way they could turn out to be the big story of the election.

A new Independent political grouping, formed (mainly) from Labour councillors and members who resigned en masse towards the end of 2016 following suspensions and de-selections – described as a “purge” – after clashes over discipline and policy. They’ve picked up more support since then and by all accounts have Labour worried in Maesteg and Caerau, drawing extra Labour party resources and time away from elsewhere in the Ogmore constituency.Labour didn’t need a second headache when already trying to fend off Change for Bridgend, but because many of the Llynfi Independents are well known they perhaps pose a stronger threat.

I’d expect at least two/three of them to retain their seats. If they can get a clean sweep in Maesteg and Caerau – and retain control of Maesteg Town Council – it’ll may well be enough it itself to deny Labour control of Bridgend Council. Wouldn’t that be ironic?

The Porthcawl Independents stormed onto the local political scene in 2012, when disgruntled residents – who felt Porthcawl is disadvantaged compared to other parts of the county, and critics of local regeneration efforts in the town – combined to pull off one of the few shocks of the election by unseating Labour cabinet member, Alana Davies.Since then the group has grown on Porthcawl Town Council and have added experienced former Lib Dem councillor Norah Clarke to their number. There’s no sign of a Labour resurgence in Porthcawl and, by all accounts, the Independents are popular amongst locals. They should be cautiously optimistic of retaining what they’ve already got and adding to it at both county and town council level, with their main rivals being the Tories, not Labour.

These are general independents who don’t form part of a single group (official or unofficial). There are no specific policies as each one will have their own.

Their key strengths are their levels of experience and name recognition. Jeff Tildesley (Cornelly) must be one of the longest-serving councillors in Wales, Ella Dodd (Coity) is still sprightly and going strong into her 80s, while Peter Foley (Morfa) has 20+ years experience; alongside them are senior former Labour councillors like Cleone Westwood and Haydn Morgan who’ve opted against joining a group. You could easily see these “wise elders” horse-trading with Labour if Labour fall short of a majority.

The challenge facing them is whether they’ll be able to hold off the more organised campaigns from the likes of the Llynfi Independents and Change for Bridgend. There’s a possibility they’ll take votes off each other and that could help Labour.

You’ve got to say their chances of winning a county seat are slim, but it’s a better picture at town and community council level. Kathy Lewis managed to get elected as a Green community councillor in Laleston back in 2012.

They’re already guaranteed a Porthcawl Town councillor (Alex Harris) and a Llangynwyd Middle councillor (Tom Muller) after they were elected unopposed, while Laurie Brophy stands a good chance with Pencoed Town Council. So in some respects this is already the Greens most successful election in Bridgend before a vote’s even been cast and they’re set to out-perform UKIP.

Amazingly, UKIP are only putting up a single candidate for the county elections – Glenda Davies in Bettws. This is despite Caroline Jones AM (UKIP, South Wales West) having an office in Porthcawl and the party getting decent vote shares in recent elections. That’s an utterly pathetic showing and a sign there are serious problems behind the scenes, with a number of people already leaving the party – the most prominent perhaps being Chris Smart in Porthcawl.

They’ve put up a few candidates for town and community council seats, and their best bet for success is there – but they shouldn’t get their hopes up.

Anyone who’s followed this site for any length of time knows that I usually get my predictions spectacularly wrong (as I did with the Bridgend election in 2012).

So instead of a “hard prediction” of precisely who I expect to win each seat, I’m going to do a cautious projection/range to give you an idea of what I expect each party/group to achieve on Thursday, assuming there were no dramatic shifts in voting intentions. 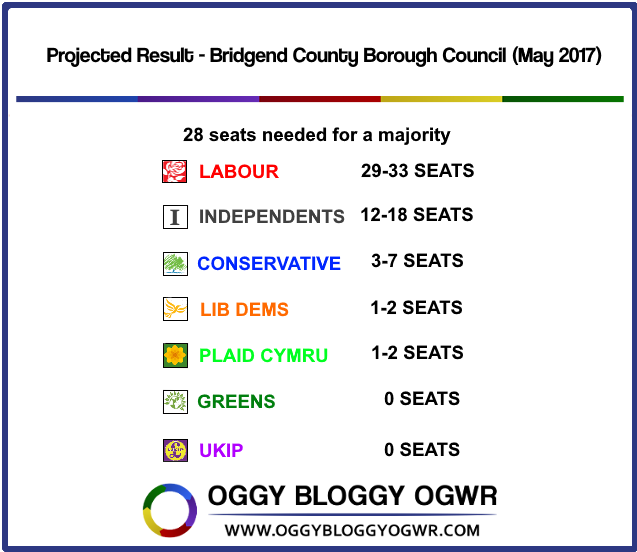 Labour ought to retain control of Bridgend Council with a reduced majority. Whether that happens or not is down to you and how you vote, though after the bombshell poll last week the projection isn’t worth much and if anyone’s going to over-perform it’s likely to be the Conservatives.

I know that’ll disappoint everyone hoping for change (and remember it’s a cautious projection) but it comes down to the electoral system and the number of non-Labour candidates standing. For example, if there are 3 seats in a ward, all Labour need to do – as the establishment party – is make sure as many of their supporters as possible (who are traditionally loyal) vote for all the Labour candidates on the ticket and nobody else. The percentage of the vote they get doesn’t matter.

Unless loads of Labour supporters desert their party, in those wards where you have multiple opposition candidates  standing at the same time for different parties/groups, the chances are Labour will win all of the seats in ward because the non-Labour vote will be split.

Now that my coverage of the local election over and done with it’s worth setting out what’s next.

I’m going to try and get posts on the Bridgend Council and town & community council results done by the weekend (probably Friday and Sunday respectively). I aim to get a post on the all-Wales local election results done by the end of next week (because I need to do some number crunching) – so there’ll be no FMQs post next Tuesday.