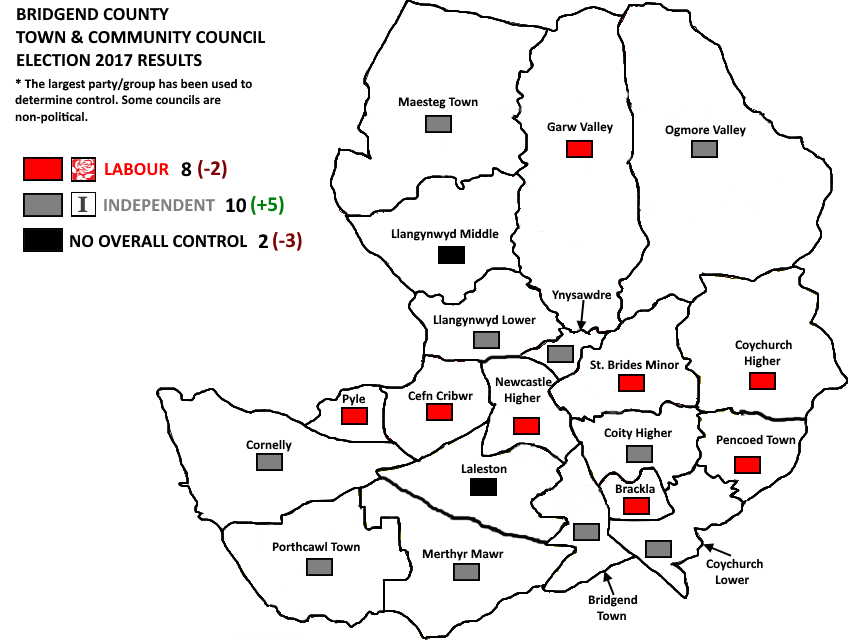 Last, but not least, it’s a look at the town and community council results in Bridgend (pdf), bringing my coverage of the 2017 local elections to a close.

Community councillors are at the lowest rungs of the political ladder and perhaps don’t get the respect and credit they deserve. It’s an unpaid role that requires at least several hours of a councillor’s time every month and it’s a struggle to get people to stand in the first place; but town & community councils are often responsible for things we would otherwise take for granted.

I was wondering how to approach this, but decided to do it on a council by council basis rather than by party. Those councillors in itallicshave also been elected or re-elected as Bridgend county councillors (results here).

It’s important to repeat, and note, that many town and community councils are run on a non-political basis, so party/group membership doesn’t necessarily matter so much. 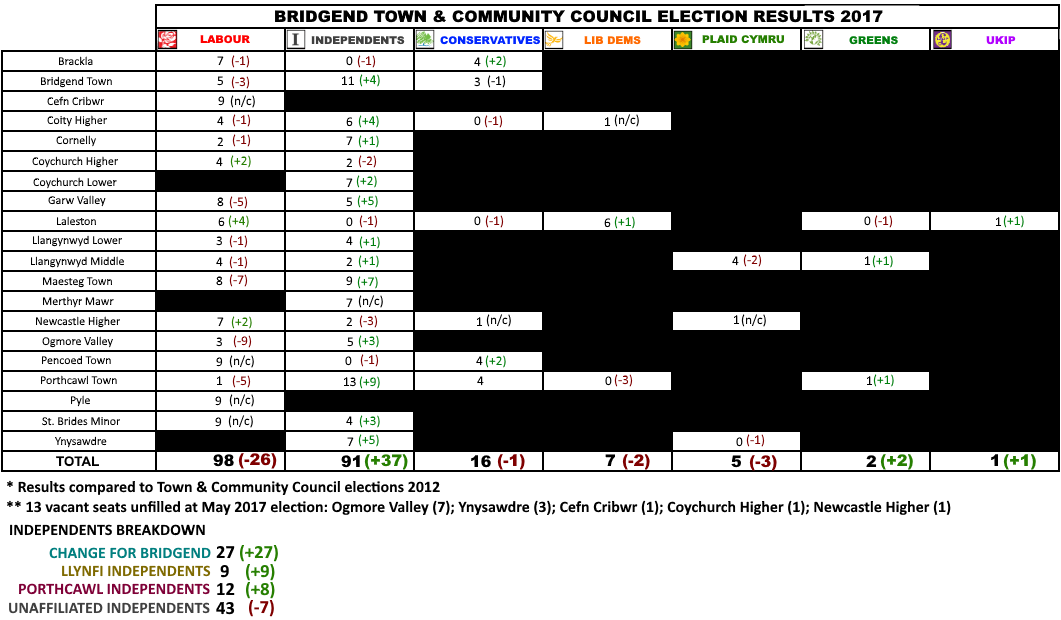 A big swing to Independents has seen Change for Bridgend take overall control with a comprehensive victory, winning a majority of the seats in Newcastle and Morfa, and Oldcastle seats split equally between themselves, the Tories and Labour. Unaffiliated Independent and former Labour man, Haydn Morgan, lost both his county council and town council seat.

The Llynfi Independents pull off a stunning – but very close – victory, with Labour losing control of Maesteg Town Council in an election for the first time ever by a single seat. I doubt Labour will care too much because they kept the majority of the county council seats in the Llynfi Valley, but symbolically it’s a major defeat.

Labour retain control of the council despite a surge in the Tory vote. Plaid Cymru have technically lost a seat (which was co-opted), though somehow I doubt Tim Thomas will be particularly disappointed with that after his county council victory in Ynysawdre.

A crushing victory for the Porthcawl Independents, taking control of the town council at a canter (without former UKIP man, Chris Smart’s, “help”). Based on the votes, if all of the wards had been contested it’s a racing certainty Labour would’ve been wiped out in the town having lost five seats. Alana Davies – former Labour Bridgend Council cabinet member – also makes her exit from politics.

Brackla Community Council (11 seats)
In a bit of good news for Labour, they retained overall control of the community council having only lost a single seat. The Tories have increased their number and after taking 3 of the 4 county council seats in Brackla, will perhaps be kicking themselves that they only put up four candidates; they completely outstripped Labour in terms of votes for individuals.It was an unexpectedly poor showing by Independents as they all fell short by at least 100 votes apiece.

The election was uncontested with Labour retaining overall control.

Another impressive performance by Change for Bridgend, who took overall control from Labour and, as a result, the Unaffiliated Independent, Ella Dodd, has lost both her community council and county council seat. A rare bit of good news for the Lib Dems too, whose candidate finished second of six in Pendre. Cornelly Community Council (9 seats)
Independents comfortably retained control of Cornelly – which has traditionally voted that way – actually managing to gain a seat from Labour in the process.

The election was uncontested with Labour retaining overall control.

No change, with seven Independents re-electedand Plaid Cymru’s candidate, Richard Jenkins – whose participation made this a contested election for a change – falling 34 votes too short.

Another strong performance by Change from Bridgend, but they couldn’t stop the council remaining in Labour hands, when it’s normally safe Labour. UKIP’s Glenda Davies failed to get elected, finishing 30 votes behind her nearest competitor.

The council remains No Overall Control with Labour and the Lib Dems tied on 6 seats each after big gains for Labour. While they were guaranteed seats at this level elsewhere in the county, the Greens lost a seat here, as did the Conservatives, while UKIP retained theirs; it’s the first time in Bridgend a UKIP member has been directly-elected (the previous two were via co-options).

The council remains No Overall Control; Plaid have lost their plurality of seats, while Labour also lost a seat. The Greens make their debut in the Llynfi Valley, while the Llynfi Independents also win a seat, which increases the Independent complement to 3 in total.

The election was uncontested with Independents retaining control. Though it’s worth pointing out that Lyn Walters is a newly-elected Conservative county councillor, while David Unwin is a prominent member of Change for Bridgend.

There are significant gains for Labour here, but before they get too excited I’ve been told that, officially, Newcastle Higher is a non-political community council so it would be No Overall Control even if a party won a majority of seats. Technically speaking though it’s a Labour gain.

The election was uncontested due to a shortage of candidates, with Independents gaining nominal control from Labour. You would probably expect the abnormally high number of vacant seats to be filled mainly through Labour co-options, so whether that nominal control lasts remains to be seen.

Labour retain control with a comfortable majority, but Independents increase their number.

No change, Independent hold and you would expect any co-options to fill the vacancies to be Independents as well.