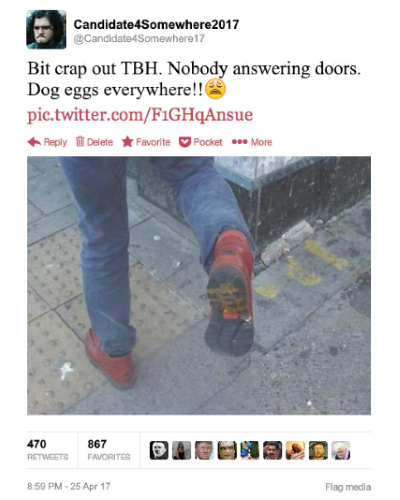 If you didn’t know better you would be mistaken for thinking this was a meme whereby people go to random doorsteps to pick up radio performances of popular band “Good Things” – who apparently have a long-running rivalry with “Fantastic Response”.

Take a look on social media and you’ll notice candidates, canvassers and activists have heard one or the other for weeks now, putting Blur vs Oasis into the shade.

But one candidate sent the internet into meltdown by admitting, “It was a bit crap out to be honest.”

They explained further, “It was tipping down all evening, then one of the canvassers stepped in dog muck and smeared it up someone’s drive….just after we promised their next door neighbour we’d do something about it.”

This break from the script sent party colleagues into a tailspin. Going off message ist verboten. I tracked down the candidate who, despite the pressure they were under to be wax lyrical on how great things were on doorsteps, was having none of it.

“‘Great reception on the doorstep’ actually means: We put leaflets through the letterbox, pray they read it, hope they remember the name come election day – or at least are able to spell it correctly. Then, we all pose for a selfie in the street and shuffle off awkwardly.

“I even had a picture taken of myself crouching down and pointing at a pothole. My stare was so wistful – making out this bump in the tarmac was from a Horizon documentary about the end of the universe – the local amateur dramatic society touted me to play Heathcliff.

The fit of honesty didn’t end there, with the candidate warned for posting something on the internet that somebody somewhere found offensive.

“All I said was that wearing a choker was a lot like saying to the world ‘Please decapitate here’….If only there were some way for political candidates to not publish brain farts on social media. Some sort of self-control, maybe.”

They were, nevertheless, unrepentant about their weariness with the grassroots of democracy, “Nobody answered the door, though often the best response on the doorstep is no response. Would you like to be lectured on immigration and bringing back the workhouse every 20 minutes?

“I suppose it’s a bit dodgy knocking on someone’s door after dusk too. Either they’ve just come back from work and are looking forward to some peace and quiet, or a knock that late usually means it’s the police about to tell you a relative has thrown themselves under a train.

“Inevitably you’ll see the leaflets piled up in the recycling the next morning. I mean, it’s not as if we’re giving up our time and sticking our necks out in a thankless task to give them a say on how things are run in their local community.

“Well, we got off our backsides and did something I suppose. At least there are no more elections for a couple of years and nothing could possibly overshadow the local council elections!”

As they walked away, feeling the burst blisters on their feet with every step, I didn’t have the heart to remind them. It would’ve been cruel to deny them that little bit of hope.