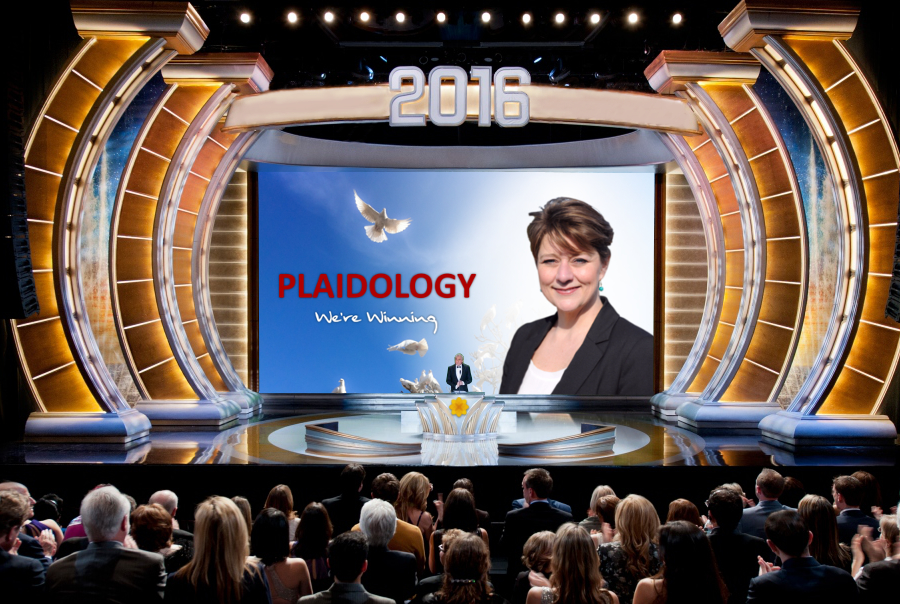 The choir stop singing. The audience whoop to the point of wetting themselves, as Leanne and the 9 apostles – Dafydd Elis-Thomas conspicuously absent – make their way on stage. #PlaidCymru was trending on Twitter in Aberystwyth, and the stage is emblazoned with social media-friendly image macros. Next to an image of their First Lady, one line dominates the others – Plaidology : We’re Winning!

“Kifflom!”, the pastor addresses the crowd, raising a hand to get them to calm down.

“Brothers and sisters, the theme today is victory. What is victory? Is it winning a majority of seats? Is it being able to form a government? Is victory whatever the hell you say it is?”

“Is it when the eyes of the blind shall be opened? Open their eyes and help them to see. Oh, that my words be now written. Oh, that they be written in a book….”

The pastor produces a green-covered book; Leannetics. The congregation cheer.

“We should cast our enemies into the fi-yuh,” the pastor scolds. “Burning horribly in a pit of flames-uh….”

“….UKIP is the devil-uh! We need to exorcise the devil-uh! In Saunders name-uh! And our other enemies; the badgers….squirrels….suppressive persons….”

“We have evidence – facts and figures folks – that people know who Leanne Wood is. That’s a good start. We also have evidence that LW has an approval rating of 48%, joint first with Carwyn the Clueless, making her the joint least unpopular political leader in Wales – which is a lot like being joint first prize in a fart sniffing contest.

“Do you know what this means? From the word of the almighty, ‘It means the Assembly election next year is shaping up to be a contest between Leanne Wood and Carwyn Jones for the honour of being First Minister of Wales’. “

Amidst the building applause, worshippers jump to their feet, shouting, “Testify!”

The pastor calms them down again, “We have a poll!….We have a poll showing that Plaid Cymru will actually lose seats and is 16 seats away from forming a stable minority administration. Politics is a numbers game, but numbers don’t mean a damn thing! All you need to do is see what you want to see, believe what you want to believe….”

“….If you believe….If you beliiiiiiiiiiieve in the pow-ah, the pow-ah of a party which can part a sea of pop….which can heal the sick with integrated health and social care….which can end austerity with money from thin air….then you have already won, my child!”

A thunderous applause shakes the hall as the congregation rise to their feet.

“When you’re in Plaid, and you drive by an accident, you know you have to do something because you know you’re the only one who can help! We are the authorities of the mind! So we can say with supreme confidence that ‘Leanne Wood is the person to lead the next government’!

“That, brothers and sisters, is the power of faith and belief and an overactive imagination. It’s a powerful drug, a powerful drug. Can I get an ‘Amen’?”

“And you’re gonna pound the streets-uh!

“And you’re gonna knock the doors-uh!

“And people are going to pretend they ain’t in so you’ll go away-uh!

“Your leaflets will go straight in the recylcin’-uh!”

“These are the times. These are the times that we will all remember. Were you there!? What did you do!? You are STILL….through all the trials, all the blisters….You are STILL going to walk the path of righteousness and say you’re hearing good things on the doorstep! Your shadow cabinet will be measuring up office furniture! We won’t need a people carrier for all our AMs, but a bus!

“Brothers and sisters….by the power of the Twitter, the Facebook and the Holier-than-thou Spirit….Go back to your constituencies or regions, and prepare for government!”

The congregation rise to their feet again and begin jumping around, as Leanne and the apostles take a bow and leave via an external door, closely followed by delirious born again true believers.

“Mind the first step out the door, it’s a long way down,” the pastor says, followed by the sound of screaming and splashing.

With the hall nearly empty, the pastor casually announces the next speaker, “Now we have some killjoy  from the Welsh blogosphere.”

The suppressive person walks on stage to silence, as the hall reverberates with microphone feedback.

“I’ll admit people like a sense of humour, and Plaid are churning out dry humour at its best. What’s less funny is that nobody wins elections by constantly saying they’re going to win – often when parties do that the opposite happens. Next year isn’t a presidential race, and nobody becomes First Minister without enough seats to put them there. Barring serious changes, you aren’t going to win enough of them. I thought that would be obvious?

“If you deep down really believe Rhun ap Iorwerth is going to be the next Economy Minister, Elin Jones will be running the Welsh NHS next May and Plaid can form a minority government with the Lib Dems and Greens….sorry, I had to chuckle there….you have your work cut out to put it mildly.

“Pull back the throttle on the happy train, sack the positive thinking coach and cancel the mindfulness retreat. You need to harden up and pretty damn quickly.

The SP files through a book, “Let’s see….ah, here it is, symptoms of groupthink : excessive optimism….disregarding warnings….believing in the righteousness of your cause…. stereotyping those who oppose the group….direct pressure on dissenters *cough* Michael Haggett, Dafydd Elis-Thomas *cough*….illusion of unanimity….self-appointed mind guards.

“Does any of that sound familiar? The problem is that it won’t sound familiar.  It’ll be written off as demoralising the grassroots. Plaid talk pacifism but are world class snipers when it comes to shooting messengers.

“What do you think, honestly, will be more demoralising? Scenario one : using the leader’s higher profile to strengthen the party as a whole, keeping ambitions realistic, and staying out of government until you can be the senior partner in a coalition? Or scenario two : saying it’s a two horse race when you’re polling a distant third, failing to win any extra seats next May, and all those activists who’ve been convinced Leanne Wood is the second coming of Eva Perón never believing your hype again?

“I’m looking forward to you pulling out all the stops to win votes beyond your heartland and deploying resources to seats other than those where the party crachach are seeking election….as you did to great effect back in May.

“Sure, you’ve done well in a few council by-elections. Your vote share went up in a few Westminster seats from bugger all to not very much. If you believe council seats are a marker for national elections, the same logic means that taking a massive dump is a quicker way to lose weight than diet and exercise – a small variable on a small scale impacting a larger and more significant variable when they’re not related at all.

“Listen to the voice saying ‘No, I don’t believe this’. Play devil’s advocate. Ask yourself why even senior party figures aren’t allowed to be critical of the party’s direction and strategies.

“If called upon, do your best for Plaid next spring; but don’t be pressured into thinking you’re performing miracles. Have fun, but don’t think you’ll win all those outlier seats you’ll need to win by delivering leaflets and taking selfies.

“Demand a comprehensive campaign strategy and proper resources from central office. If candidates and senior figures get pissy about it, remember what Plaid are telling you now about forming the next government, remember how many seats you need to win to do so, then reflect on how silly it was.

“Plaid are right to want to lead the Welsh Government. So work to ensure that in the future Plaid are ready to lead a government – which is a long, slow process that’s far from over.

“One hallmark of good leadership is a willingness to listen and change when necessary. A chummy consensus-through-gritted-teeth isn’t a good thing. It leads to bad decisions being made, because people who spot mistakes keep quiet as there’s too much pressure to keep smiling all the time, and it ends up blowing up in the press.

“It’s destructive in politics because parties have to be right as well as liked. If you can’t question things, you’ll never reach the right conclusions and you can’t fix gaping policy holes – the funding parity with Scotland stuff being a case in point.

“Do you really want a Welsh Government led by a party that can’t take criticism and is unable to learn from its mistakes? How’s that any different from Labour?

“I’m not sure how many more red lights* you’ll be able to ignore before you suffer a serious accident. While you’re clapping along to Pete Seeger in your VW camper van, there’s a massive smoke-belching lorry with ‘UKIP’ written on the side pulling out in front of you….”

Those worshippers who remained behind weren’t impressed by the negativity in the room. They start booing and throwing plastic cups at the stage.

“….Do you have an energy policy based on something other than hot air yet? What’s your USP? Have you planned the first budget of a Plaid Cymru government? How will you get to the magic 26 seat number and which seats will you target? Or are you just going to prop up Labour instead?

*The format of regional list selections, where it appears you have to register and vote in person at special meetings. Such meetings can be packed with supporters of one candidate, particularly candidates who can rally local support on short notice (in the area where the meeting’s held) but less so across a region. This system effectively “locks out” Plaid members who can’t attend and automatically hands an advantage to some candidates. The weekend’s result was typical for single transferable vote, but voting in this manner – which I presume is done for vanity (photos of candidates speaking in front of a “packed venue” to create a bandwagon effect) – very nearly resulted in an embarrassing outcome for Plaid.