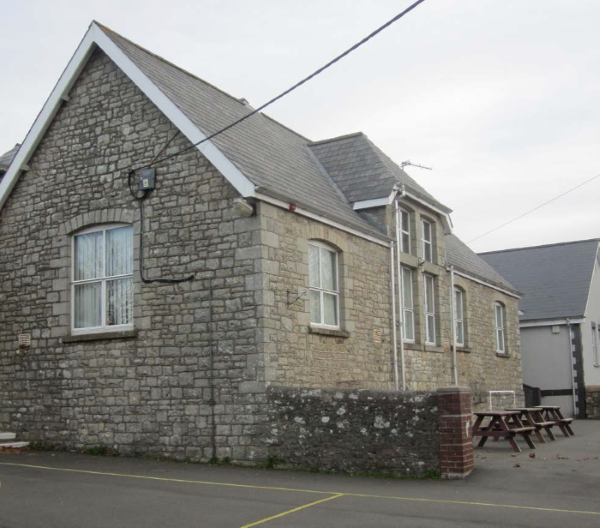 The new Coety Primary School in Parc Derwen is close to completion and due to open in November 2015, but questions remained over what would happen to the old Coety Primary site at Heol y Ysgol.

The site itself is, as you might expect, quite small as it’s in a rural setting. It includes the Victorian main school building (which isn’t listed), other school buildings and a sizable playing field – adjacent to a public playing field/football pitch near the grounds of Coity Castle. The school playing field is significantly larger than the public one.

A design brief for the site was prepared for Bridgend Council (BCBC) in March 2015 by Barton Willmore (pdf). The brief says the school playing field falls outside the settlement boundary of Coity and is considered open countryside. According to BCBC’s own planning guidance, a countryside designation means development must be “strictly controlled” and is restricted to certain uses like agricultural businesses. It therefore can’t be developed unless it meets an exemption.

Two indicative layouts for the site were drafted for the design brief – one which retains the original school building (5 homes) and one which involves demolishing the building (7 homes). 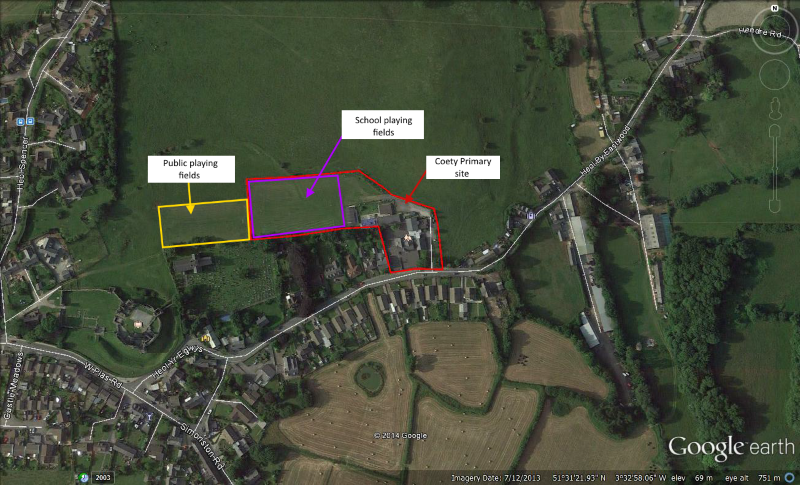 On July 8th, two behind closed doors extraordinary meetings were held by BCBC’s cabinet and full council respectively to discuss the future of the Coety Primary site. Holding the meetings in closed session raised my suspicions immediately as it tends to be a rare occurrence in Bridgend but, of course, there’s little anyone can do to find out details once a meeting’s exempted.

The justification for holding the meetings behind closed doors is that it dealt with financial interests of the authority (a school) and it was decided that it was in the public interest not to disclose the information (if you want me to be specific: Paragraph 14 of Part 4 and Paragraph 21 of Schedule 12A of the Local Government Act 1972).

It was only last week that the reason for the private meetings became clear in the Glamorgan Gazette, with Bridgend Council approving a sell-off of both the main school site and the playing field to an unnamed developer. To comply with Bridgend’s planning guidance on countryside development, the school playing field is set to be used as a private paddock by two of the proposed homes (presumably to boost the value of the new homes in order to make the development economical).

A sell-off of the school should’ve been expected and as a small development I doubt it would be controversial; but neither of the indicative housing layouts in the design brief included the school playing field.

Quite understandably, local residents aren’t pleased. Coity Higher Community Council would prefer to buy the field and merge it with the public playing fields to create a regulation-sized sports pitch. The current public playing field is far too small to host even Sunday league games.

Cllr. Ella Dodd (Ind, Coity) is quoted in the Gazette as saying, “This council (BCBC) had an opportunity to make a real difference, but has decided to forfeit the chance to make a positive impact on the village”, with the school playing field set to become large gardens. The decision has also been made without any consultation.

I’m disappointed, but not surprised, that a touch of Carmarthenshire has come to Bridgend. We know how fond that particular local authority is to use “commercial confidentiality” to exempt items on meeting agendas from publication or public scrutiny.

Although Parc Derwen will involve the creation of a large playing field as part of the new school development, the development as a whole was sold to Coity residents on the understanding that a buffer would be maintained between the two communities, meaning Coity would retain services that would otherwise be centralised in Parc Derwen (shops, playgrounds etc.)

In the end, BCBC have put horses and property speculation before the needs of the local community and have partially broken the promises they made, along with the Welsh Government (Parc Derwen was originally a WDA-led development), when Parc Derwen was proposed.

This might not sound like the most important issue in the world but it crosses several themes : community asset transfer, transparency in local government decision-making, promoting physical activity and the sell-off of playing fields itself.

It’s not just happening in Bridgend either. There’s a high profile case involving the sell off of playing fields at Pontarddulais Primary School on the outskirts of Swansea for housing, while other playing fields in Swansea are also targeted for development.

Last year, the Welsh Government drafted regulations – part of a law introduced by former Plaid Cymru AM, Dai Lloyd – which requires local authorities to consult with communities for at least 6 weeks when disposing of/selling off playing fields which are used by the public for sport.

Coity Primary School’s playing fields are used by the school for sport, but not the public which may provide BCBC with a loophole. If villagers do use the playing fields for recreational purposes then that might change things. School playing fields aren’t subject to the regulations if there’s been a consultation on a school merger or closure as set out within the School Standards & Organisation Act 2013. In all other cases, the playing field regulations apply (or that’s how I read it – p4-5 pdf)

The regulations were introduced too late for Pontarddulais, but were approved in June and will come into force on 1st October 2015 (when the old Coety Primary will still be open). That might be too late for Coity as well, but it could be an avenue worth exploring by the Community Council if no planning application for the site is submitted before that date.