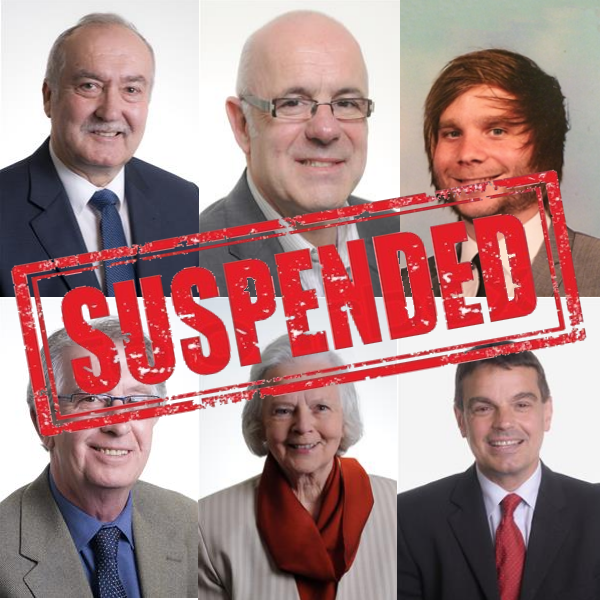 As you might remember, last month six Labour councillor were suspended after they voted against (or abstained on) a merger proposal between Bridgend and the Vale of Glamorgan (“Bridgevale”).

The councillors appealed, but it appears Welsh Labour run disciplinary proceedings similar to those of the English FA. As football fans know, if a player appeals a straight red card and that appeal fails they can have their ban extended.

Cllr. Edwards describes himself as the “worst offender”, and as the (at the time) chief whip of the Labour group he was always going to be in line for the most severe punishment. The suspensions means they can’t take part in Labour group activities. It won’t affect their position or duties as councillors and they remain Labour members. In parliamentary terms they’ve “had the whip withdrawn”.

How Welsh Labour discipline their members is entirely up to them, but this seems wholly disproportionate. One possible explanation as to why this has happened may lie out in the Wild West. Pembrokeshire to be specific.

Last year, at an extraordinary meeting called to pass a motion of no confidence in Pembrokeshire’s then Chief Executive, Bryn Parry-Jones, the issue of “predetermination” came up (The Stench of the Cleddau).

Newspaper cuttings were passed to the barrister Tim Kerr QC in a now-infamous white envelope. It was implied very strongly that anyone who made a comment on the record supporting the motion of no confidence was in“predetermination”.

Councillors are supposed to go in to meetings and votes with an open mind. Anyone who votes on a predetermined basis – making their mind up before the vote – is potentially in breach of the councillor code of conduct and liable for disciplinary procedures and/or an Ombudsman investigation.

Although it doesn’t specifically mention “predetermination”, in essence, it means “don’t make a decision without hearing the evidence provided by council officers”. This shuts down debate because if you don’t agree with what officers are saying, and vote against, you’re likely to automatically fall foul of the rules.Those suspended councillors who are also members of Maesteg Town Council (or other bodies, like Community Health Councils) will have “already made up their mind” in the eyes of Bridgend Labour, as  the town council passed their own motion rejecting the “Bridgevale” merger – although this occurred after the extraordinary meeting.

However, the code of conduct also says (Para. 12) that councillors will not be considered to have a predjudicial interest where that business relates to any other authority they are a member of. I presume that includes community councils.

If Bridgend’s Labour group are going to use predetermination/pre-mediation as an excuse to punish these six councillors, they’ll have to take a look at themselves as a whole. This decision wasn’t decided during the council meeting. The Labour group met behind closed doors and decided to press ahead with “Bridgevale” a few weeks before the extraordinary meeting to discuss the merger was to be held. You could also call thatpredetermination or pre-meditation.

So this isn’t about predetermination at all, but an autocratic attempt to smoke out backbench rebels in order to maintain loyalty during what’s likely to be a difficult few years ahead for the authority. “Toe the party line, or else”. The six councillors are being made an example of.

This isn’t the first time BCBC have had an issue with predetermination either and, ironically, from the opposite side. In 2006, the High Court ruledthat Bridgend’s cabinet were not predetermined in their opposition to controversial plans for a WRU Academy and housing at Island Farm; plans which collapsed suddenly when Labour – who supported the proposal – lost control of the authority in 2004.

The Localism Act 2011 – which applies in Wales even though local government is devolved – also effectively legitimises predetermination and protects councillors’ rights to represent the interests of their constituents fully and express their views.

What Bridgend Labour have done therefore is incredibly sneaky. Anyone who had made even the slighted opposition to “Bridgevale”public in the run up to the vote was predetermined and probably flagged up to the cabinet as a potential “troublemaker”.

It’s also worth factoring in that Ogmore is one of Labour’s safest seats in both the Assembly and Westminster, and will no doubt be a top prize for party supremos wanting to be parachuted into a position of influence.

Many of the suspended councillors have good reputations, to the point of being seen as a threat to someone elses’ “birthright”, and will now have their cards marked as “free-thinkers”. Although parties keep one or two popular mavericks in their ranks to keep up appearances, it’s something all political parties loath and one of the main reasons I don’t want to join one. Could you imagine if I were a Plaid member and said this or this?

I don’t know if Bridgend’s Labour group have selected their 2016 candidate in Ogmore yet (presumably it’ll still be the sitting AM and Labour’s Chief Whip, Janice Gregory – whose husband happens to be a member of Bridgend’s cabinet), but if they haven’t, they’re likely to do it over the next 4-6 months. Just saying.

“Bridgevale” is as good as dead, and what Bridgend’s Labour group have done contradicts Welsh Government policy anyway. So on the one hand the councillors are being punished for not toeing the party line in Bridgend, but on the other they’re sticking with the policies laid down by the Public Services Minister, Leighton Andrews (Lab, Rhondda) – which is (currently) to press for a Bridgend-Neath Port Talbot merger.

Regardless, it’s a black mark on the way Labour are running Bridgend.