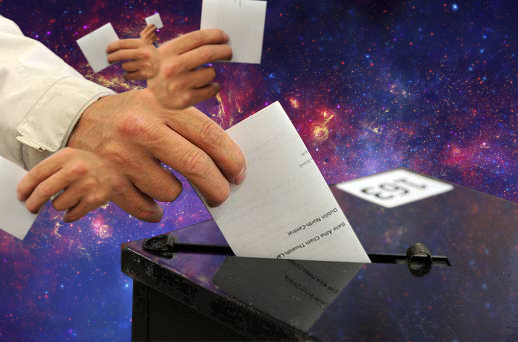 For decades, psephologists and constitutional experts have tried to devise the perfect electoral system. Some prefer the brainless simplicity of first-past-the-post, others prefer a more proportional system which gives people who vote for fringe parties four or five rolls of the dice.In the run up to the UK election, the electorate have been bombarded with information telling them that instead of voting for the party or candidate they put an X next to, they’re actually voting for someone else – except viewers in Northern Ireland.In a groundbreaking collaboration between theoretical physicists and political scientists, to accommodate this new paradigm, a new voting system has been devised that transcends the worlds of politics and quantum mechanics.

“As soon as you place your ballot in the box, it’ll pass through a phenomenon we physicists call a trans-dimensional photocopier singularity, hidden inside the ballot box itself.

“Every conceivable outcome will occur at the same time. It’s not a simple case of totting up the number of votes cast for each candidate and the person with the most votes getting elected to represent your constituency. It’s about altering the very fabric of space-time itself, producing outcomes you didn’t vote for – for example, maxing out the Labour vote in Scotland yet still returning a Conservative government, as happened in 2010. And 1979. And 1983. And 1987. And….

“The old biddy who doesn’t like black people will be playing cosmic puppet master; but the best part is she doesn’t even realise that in her universe, her UKIP vote in rural Kent will result in a Sinn Fein-Monster Raving Loony Party coalition government.

“As you approach the singularity, for a brief instant you’ll experience a ‘hall of mirrors’ effect where you’ll see every single possible version of yourself voting for every single party and every single candidate – not the party you went in to vote for. Science, bitch!”

Professor Yogi Plopp told us, “Normally, when you open a ballot box in a leisure centre, a few hundred pieces of paper come out, each with an X or ‘All politicians are knob-ends’ on it.

“This year, under quantum voting, approximately 6x1014ballot papers will come out of each and every box, meaning every voter everywhere will have voted for every single party and produced every single possible outcome at the same time. In a universe far far away, the dream of ‘Vote SNP, get SNP’ can really happen. Result declarations may be delayed in some constituencies accordingly.

“Can you just imagine living in a universe so cold and cruel that Wayne David is about to walk through the doors of Number 10 as Prime Minister? I have no mouth, and I must scream.”

It’s understood turnout will be boosted to significantly more than 100% because everyone will definitely vote in at least one alternative universe. However, quantum voting isn’t without its critics.

Some say the prospect of thousands of different Prime Ministers walking down Downing Street on the morning of May 8th, each one existing in their own plane of the space time continuum, will cause traffic chaos in Central London as well as a devestating build up of smug.

Others warn that quantum voting causes its own version of a grandfather paradox. Long-dead relatives who used to earn 9s 8d working down a mine appear before people like Slimer from Ghostbusters in order to tell them who to vote for – even though they’ll be unaffected by the policies because they’re dead.

It’s even rumoured that in one alternative universe, instead of peacfully existing as ash, Aneurin Bevan is still alive and influencing health policy in an age of MRI, robot surgery and stem cell therapy.

When I approached the Wales Governance Centre, they were consuming unhealthy amounts of coffee and the air hung with smoke, with psephologists getting snappy at anyone highlighting Cardiff University’s no smoking policy. “I haven’t slept for five days,” said one senior academic. “It’s hard enough trying to predict results in five Assembly regions! Try doing it in 650 constituencies across an infinite number of universes!

“BASTARD!” the academic screams, writhing around in tears, shaking a fist at a giant political map of the UK expressed as a series of Friedmann equations.

I asked proponents of quantum voting whether people should vote for the party they believe has the best policies, and the candidate that would best represent their constituency, keeping their fingers crossed that their preferred party will win enough seats to influence or form the government?