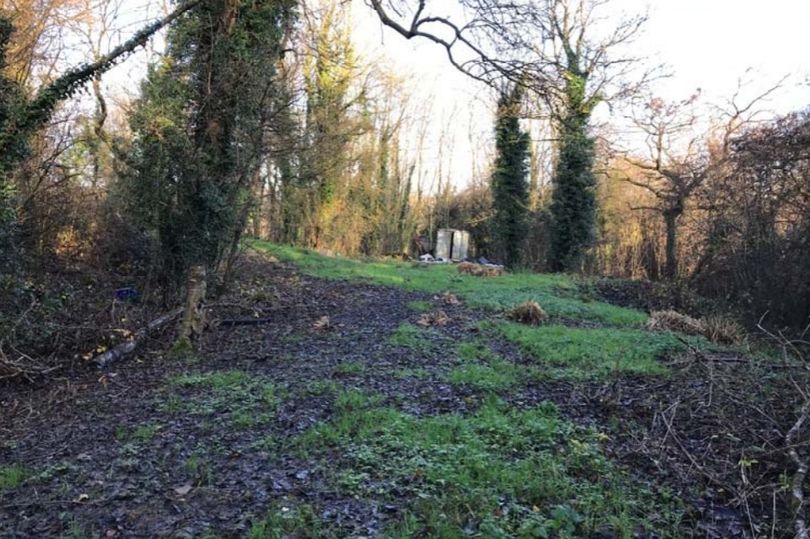 As covered in this week’s Glamorgan Gazette, a deadline to submit comments relating to a small, but controversial, development in Brackla has been extended until Tuesday July 3rd.

Normally, that wouldn’t be enough in itself to justify a post, but what makes this different is the development could encroach on a designated ancient woodland and set a precedent for similar developments in the future. It’s resulted in a petition being launched by a local resident.

The planning documents suggest the development could be expanded to up to 11 building plots in the future (pdf – p43).

The southern end of the site has already been built on, with a few detached houses accessed via a private drive and a residential care home for adults with learning difficulties. The application is effectively an extension of what’s already there.

The initial development of three plots won’t, as far as I can tell, encroach on the area designated in the ecologist’s map as ancient woodland (the brown hatched box) – but future phases certainly would.

The whole central part of Brackla, including the Briary Wood and Tremains Wood, is part of a site of importance for nature conservation (SINC).

The ecologist’s report states many of the trees are of poor quality or even dangerous. There are also no suggestions any protected species are present in the immediate area other than nesting birds.

The ecologist’s report concludes that:

“….no direct impacts to the ASNW (ancient woodland) designation would occur based on the proposed layout. The woodland is not currently managed and is likely to deteriorate further in a ‘do nothing scenario’ and some development at the site would present an opportunity to introduce enhancement/management measures for retained habitat features.”

I’m sceptical, as the plans – if developed in full – would require significant clearance to see through; there wouldn’t be much of a habitat left.

Just a week or so after I wrote about Bridgend Council’s tree management strategy, this development proposes the removal of 20+ (mainly Ash and Sycamore) trees in the first phase and possibly 22 trees in future phases – including from the ancient woodland area.

The planning statement (pdf) defends the loss of woodland by saying there are alternative open spaces within 300m of local residents – which is in line with guidelines set down by Bridgend Council in the Local Development Plan.

While a large part of Tremains Wood has been designated a Local Nature Reserve, the southern part of the woods – including the development area – hasn’t.

The planning application will have to be treated on its own merits, but as it lies outside an area allocated for housing, it’s possible it might be referred to the full council for a vote, not just the Planning Committee.

Here’s a reminder that the closing date for comments on the application is Tuesday July 3rd. BCBC have said that due to problems leaving comments on the planning website, comments should be sent by email to planning@bridgend.gov.uk