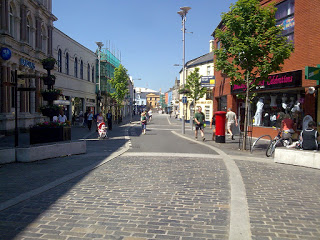 De-pedestrianisation of Bridgend town centre has taken a step foward following an informal consultation with groups representing vulnerable or protected characteristic people. The consultation has resulted in some modest changes, due to be discussed by Bridgend Council’s Cabinet next week (pdf).

Four of the six groups consulted – mainly representing the elderly and disabled – were opposed to the changes as they were originally outlined.

Amongst their concerns were that the proposed waiting times in the new parking bays would be too short for blue badge holders, bollards used to separate the road from the pavement could be a trip-hazard for the visually impaired and there would be an increase in air pollution.

All of the groups backed the inclusion of pedestrian crossings outside the Job Centre and Wyndham Arms/Spoons, while officers confirmed that traffic would be subject to a 20mph speed limit.

Officers have recommended the following changes to Cabinet:

If Cabinet approve (as expected) a detailed design will be undertaken at a cost of £60,000, followed by another public consultation.