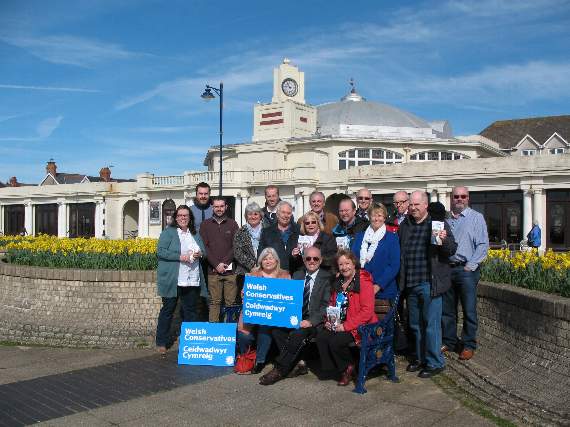 Update: 08/09/2017: Cllr. Ken Watts has since confirmed the three resignations were nothing to do with electrification (I’ve been told by several sources it was more to do with the 2017 General Election selection process – the “long-standing tensions” I mentioned below). All three councillors will remain Conservative party members but will sit outside the party group on the council, which sounds like it could get messy in the long-run. I’ll still be counting them as unaffiliated Independents from here on in for the sake of clarity.

The reasons aren’t clear at the moment but the resignations coincided with a motion condemning the cancellation of Cardiff-Swansea rail electrification by the UK Government in July, which was being debated at the monthly full council meeting yesterday (6th September). Comments in the House of Commons by the Welsh Secretary, Alun Cairns, backing the decision on the same day may not have played well either.

As the council meeting wasn’t webcast it’s unclear what was said, but it’s known that some local Conservatives were unhappy with the UK Government’s decision. Also, there were long-standing internal tensions over the imposition of a candidate on the Bridgend constituency for the 2017 General Election – weeks after the party produced their best ever result in a Bridgend council election. 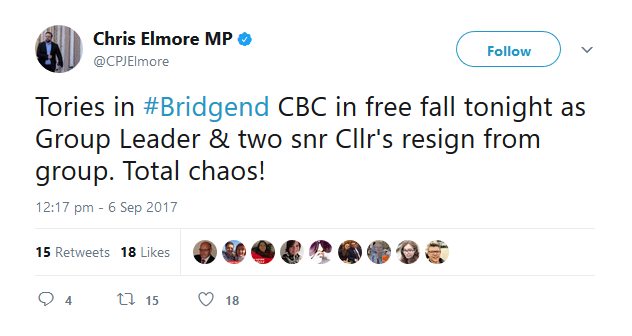 The councillors in question are reported to be the (former) group leader, Cllr. Ken Watts (Newton), former Conservative Assembly and Parliamentary candidate, Cllr. Alex Williams (Penprysg), and Cllr. Julia Williams (Hendre). None of this has been officially confirmed yet and all three are still listed as Tory councillors on BCBC’s website.

As a result, the Independent Alliance – made up of Change for Bridgend, Porthcawl Independent, a Lib Dem and free-standing Independents – are set to overtake the Conservatives as the largest opposition group on Bridgend Council. This may impact the distribution of committee chairs and memberships, only weeks after they were “finalised”.