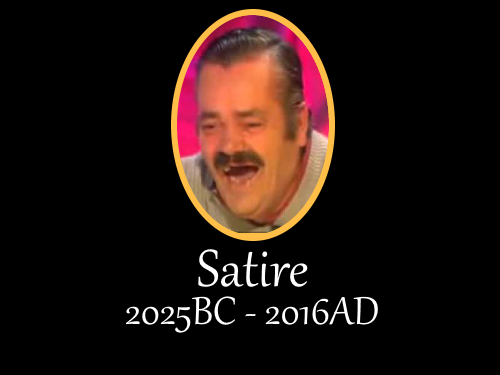 2016 has marked some notable deaths, but the biggest celebrity death of the year was Satire, who passed away peacefully having suffered a long illness called humanity.Satire spent time in a coma, but briefly regained consciousness before expiring, surrounded by friends Irony and Slapstick – who graciously provided an outline of Satire’s final moments.After coming around, and a nurse fluffing their pillows, Satire was upbeat, “Fill me in on everything that’s happened, so I can get back to work as soon as I’m out of here.”

The blood drained from Irony and Slapstick’s face, “We’ll start softly. How about football?”

“Tell me some things are still sacred in this world. Tell me Jose Mourinho is still a wanker.”

“It’s a good place to start. Wales reached the semi-finals, while England were knocked out by a desolate volcanic rock, whose pool of professional players is shorter than a Post Office queue. They didn’t even need penalties.”

“What!?” Satire’s blood pressure rises and the machines surrounding him start making unsettling noises, but they manage to calm themselves down before drawing the attention of the medical staff.

Slapstick takes over, “Then they replaced Woy Wodgeson with Sam Allardyce – who got sacked after a few weeks because nobody looked at his track record at club level and thought, ‘Hmm, he might be a bit dodgy.’ England were paying him £3million a year yet he was still looking for an extra 400 grand.”

“The jokes write themselves, I suppose,” Satire said. “I guess things in domestic football calmed down by the end of the year.”

“What else?”Slapstick thinks. “Oh, there was that thing where people were going around dressed as clowns, standing in creepy poses on doorsteps and in the streets, or trying to catch monsters on their smart phones.”

“You mean the Welsh Assembly election?”

“It produced one of the biggest shocks in modern political history,” Slapstick says, piquing Satire’s interest.

“What about the legendary Elwyn Davies?”

“The thing is,” Irony says, “you know how I said Labour won. Well they still didn’t have a majority, so with Plaid Cymru gaining a massive one seat and taking their total number to 12, they decided Leanne Wood should be First Minister instead so put it to the vote.”
“That’s a reasonable tactic to send Labour a message and give them a bloody nose, maybe even force them to the negotiating table, even if it was a certain loss,” Satire concludes.

“The vote was tied; Labour threw their toys out of the pram because they didn’t get their own way while Leanne Wood was very nearly made First Minister with Tory support.”

Satire rolls over in pain; his sides are splitting and not in a good way.

“It get’s better”, Slapstick adds. “The only Lib Dem joined the cabinet, but everyone’s still trying to convince themselves there’s no formal coalition.”

“Just to prove how topsy-turvy everything is,” Irony says, “one of the most senior and experienced AMs left the main opposition party because the party were opposing too much. Plus, the privately-educated landowner, Andrew RT Davies, is half-successfully setting out his stall as the voice of the anti-establishment common man.”

“How can anyone write jokes when this is what actually happens?”Satire laments. “Please tell me there’s no more. I don’t know how much I can take.”

Satire groans as a nurse sticks their head around the door.

Irony explains further, “They ousted the guy who was the face of their successful campaign within days of taking office, and replaced him with a disgraced former MP who doesn’t even live in Wales and who once wrote a song in support of the English football team.”

Slapstick finishes, “At one of the first plenary meetings he equated the female opposition leaders with prostitutes.”

Satire groans again, but Slapstick presses on, “At UK level they held two leadership elections in as many months as the first winner quit within 18 days, and one of the previous front runners was twatted in Brussels then left the party in a huff.”
“Seven AMs. SEVEN.” Irony reiterates. “They also want to build a motorway in Wales and make the Irish pay for it.”

“It’s not over yet,”Slapstick warns. “We still need to talk about Brexit.”

“The British are a sensible group of people,” Satire replies half-reluctantly. “I’m sure the debate was a reasoned one, based on the pros and cons of membership of a globally significant trading bloc, the possibility of reform from within in areas such as immigration and the fiscal union, as well as a detailed analysis of the options – and workable plan – should the UK leave the EU.”

“Well….” the pair don’t quite know how to break the news, “….it came down to spending a phantom £350million a week on the NHS; ‘kick ’em out’; both sides accusing each other of scaremongering and German car-makers needing us more than we need them.”
“No….” Satire becomes short of breath, “how bad….is the damage?”

Slapstick runs off a list with his fingers, “The pound is about as valuable as Monopoly money, while there was a brief run on Marmite and Pot Noodle; even Toblerones and packets of Maltesers have shrunk. After seeing what’s happening here, support for the EU has risen in the EU itself too, while it’s expected to leave a £122billion black hole in public finances over the next four years.

“It looks like the UK can’t afford ‘independence’,”Irony added. “You know something’s not quite right when the son of Ian Paisley is touting Irish passports, and the grand plan for post-Brexit trade is flogging jam, tea and biscuits to the Japanese.”

“Why didn’t anyone warn them?!”

“The people ‘had enough of listening to experts’, so they listened to Michael Gove and Jacob Rees-Mogg instead. Gove writes for The Times, don’t you know.”
“Well you can’t write this stuff….Who was the voice of opposition in all this?”

“Nicola Sturgeon still has her head screwed on,” Slaptick explains, “but at a UK level it was Jeremy Corbyn.”

“Corbyn?” Satire recollects. “Oh, I remember him from before I went into a coma; the unelectable Trot. I take it amidst the chaos over Brexit there was a leadership contest, and one of these great, multi-talented rising stars I kept hearing so much about stuck their neck out and took over in case there was a snap general election – Dan Jarvis, Chukka Umuna, Caroline Flint….”

“Exactly.” Irony is tempted to laugh it off but realises Satire’s in no condition for jokes, “Jeremy Corbyn now has an even stronger mandate. He’s almost certain – as a pound shop Michael Foot – to lead Labour into the next general election against a pound shop Margaret Thatcher who’s getting better polling figures than Tony Blair in 1997.”

“The corpse of the ‘progressive alliance’ is being propped up on a stick again,” Slapstick continues, “meaning Greens could be asked to vote for Trident-supporting, pro-nuclear Labour candidates to keep out Trident-supporting, pro-nuclear baby-eating Tories. You and I both know the left only raise the idea of a ‘progressive alliance’ when they know they’re fucked and have run out of ideas.”

Satire lets out another howl of pain. Outside, a nurse points towards the room whilst talking things over with a doctor, “It can’t get much worse, can it?” Satire just about has enough strength to go on. “The world still needs to keep the powers that be in check and that’s my job. I’m still relevant damn it! It’s too soon for me to die!”

“There is one more thing,” Slapstick adds, unsure how Satire will take it. “You know how the Americans don’t like being upstaged in anything….”

“The Republican presidential candidate was a former reality TV star-cum-billionaire property tycoon who, whilst being as privileged as humanly possible, positioned himself as leading the fight against ‘The Man’. He ran a campaign on mass deportations, white nationalism, boasting of sexual conquests and a casual attitude to nuclear weapons.”

Irony cuts in, “He was so controversial he was ‘inexplicably’ getting blanket 24/7 coverage in newspapers, on TV news stations and on social media. Following the election of the first black president, Americans had a mainstream candidate endorsed by the Ku Klux Klan.

“The Democrats picked the only candidate as untrustworthy and unlikable as him because it ‘was her turn’. Plus, people take Facebook and Twitter so seriously nowadays they actually believe the fronts people put up to show they’re living fulfilling lives instead of being deeply miserable like everyone else….and that Hillary Clinton is a reptilian with Alzheimer’s.”

Satire can’t speak anymore, but their brow furrows as they muster the strength to rise from the bed and point as if about to say something. 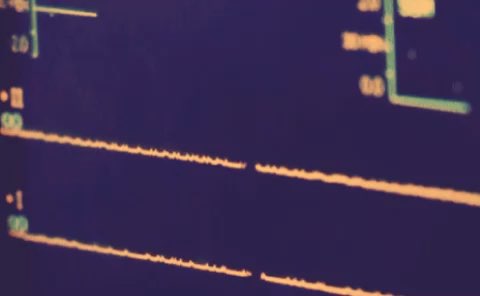