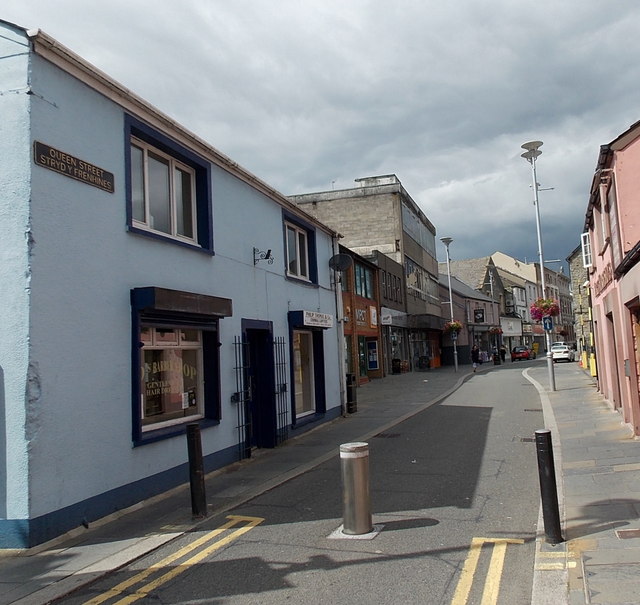 Bridgend Council’s (BCBC) Cabinet meet next week to discuss a new round of reports, including a significant move towards opening  Bridgend town centre to traffic, flood management, praise for libraries and proposals for a“Bin Police” to enforce the two black bag limit from next April. There’s also a separate update on Brackla station.

Plans to reopen Queen Street, Dunraven Place and Market Street to traffic in Bridgend town centre have been given a boost, with Cabinet members to be presented with public consultation responses and further recommendations next week (pdf).

The recommended proposal is to create a 20mph zone, put bollards along the kerb and install two pedestrian crossings – expected to cost £552,000 in total (Backing the BID & Bollards).The public consultation – which received almost 2,500 responses – was overwhelmingly supportive of the proposal. 77% of respondents agreed with de-pedestrianisation, with particularly high support amongst tourists (86%). There was also majority support for the streets to be accessible by car 24 hours a day.

Officers recommend that parking be limited to 30 minutes due to the limited number of bays, though a slightly larger number of people (42.1%) preferred one hour parking over 30 minutes (40%).

The next step will be for the proposal to go out for detailed design and further consultation with the police, bus operators, fire service etc. Traffic orders will need to be drafted too. This is expected to cost £60,000.

However, there’s no budget allocation for the (£552k) de-pedestrianisation work itself and it can’t happen until external funds are secured. A bid has been made to the Welsh Government, but BCBC have been told they’re unlikely to see the money until 2017-18; this may also need to be match-funded (normally that would’ve been EU money, but….).

I would otherwise skip over this, but due to recent flooding from Storm Angus – which hit the Garth area of Maesteg particularly hard – it’s become important.

Cabinet members are to be updated on the statutory Flood Risk Management Plan (pdf). The goal is to enable local authorities to identify “actions that can be undertaken to reduce the impact of flooding”. The Welsh Government are responsible for producing a national plan, while Bridgend Council will develop a local plan.

As part of the Welsh Government’s work with Natural Resources Wales, they’ve produced flood maps which highlight 1km square areas (“blue squares”) that are prone to flooding, where there’s either: a minimum of 200 people affected, a minimum of 20 businesses affected or 2 or more critical resources (I presume that means things like sub-stations).

The irony is that despite what’s happened over the last week, no “blue squares” have been identified in Bridgend county based on the above criteria, but the thresholds could change in future.

Cabinet members have been recommended to approve public consultation on a Draft Local Flood Risk Management Plan, which will presumably go out for consultation in due course.

All public library services in Wales are measured by whether they meet minimum standards or not (known as Welsh Public Library Standards, funnily enough). The 2015-16 report for Bridgend’s libraries – now run by Awen Cultural Trust – has been released (pdf).

Of the 18 core standards, Bridgend library services meet 17 of them, while they also meet 6 of 7 quality indicators. These standards include things like improving digital inclusion, opening hours, meeting the needs of Welsh-language users and how popular the services are.

The only standards which the library service didn’t meet relate to staffing levels, but officers justify this as meaning that staff are being used “efficiently”.

As I’m sure everyone living in Bridgend country already knows, as part of a new seven-year waste collection contract, BCBC are pressing ahead with plans to restrict households to putting out a maximum of two black bags a fortnight from April 2017.

The idea is that it will encourage households to recycle and prevent BCBC being fined by the Welsh Government for sending too much waste to landfill under new national targets to boost recycling rates to 70% by 2025.

BCBC’s cabinet will be presented with two reports. The first on the public consultation (pdf) and the second on proposals to enforce the new policy (pdf).

The consultation – which regarded what sort of dispensations could be offered households – received 558 responses. In summary:

Any household eligible for a dispensation (coal fires and large households) will need to contact the waste contractor, and will have their claim “rigorously checked” beforehand. They’ll be expected not to place any recyclable materials in black bags or risk having the dispensation withdrawn. It’s estimated these dispensations will cost BCBC £35,000 a year.Next, how BCBC and the new contractor expect to enforce the two-bag limit for everyone else.BCBC intend to conduct a public information campaign in the run up to the new contract coming into force next April and for six months afterwards. They’re expecting so many public enquiries on the new policy that they are seeking to employ seven temporary contact centre staff for the period.In terms of what they actually intend to do with households who don’t comply, they intend to educate first of all – either by putting stickers on bags or council officers visiting. After that, persistent offenders will be fined £75.

In a shocking, but not entirely surprising, admission, officers admit BCBC doesn’t currently have the staff or resources to properly police the new policy. They proposed two broad options:

Officers favour the “bin police” option on a one-year trial, with an optional two-year contract if successful.

As some of you will know (Brackla Station News & Tondu Expansion), a car park for the proposed railway station at Erw Hir in Brackla has been approved and is currently under construction. However, as the station itself is unlikely to be built any time soon, it’s effectively a car park in the middle of nowhere – which has left local residents baffled.The reasoning that’s emerged behind the decision to press ahead is (AFAIK) that BCBC had to spend some of the money set aside for the station within a certain amount of time, so it was better to get something built instead of leaving it and risk losing the money and having to raise it again in the future.The second phase of the project was the station itself, and in the last week or so BCBC have submitted an application for the station and a footbridge connecting Brackla to Bridgend Industrial Estate.

Don’t get your hopes up. A new station would still need Network Rail and Welsh Government approval. As Brackla station has been pushed back to the 2020s, I suspect the application has been submitted just to maintain the planning use for the land. The planning drawing (above) even looks like a copy and paste job from a different application (look at the car park and bus stop).

However, if BCBC construct the footbridge by itself now, it would make the investment in the car park worthwhile and provide a much-needed foot and cycle link to a major employment site.