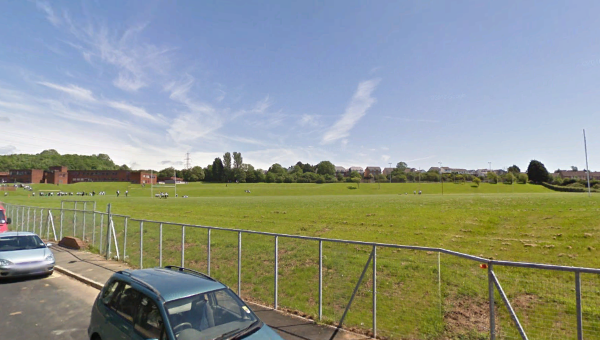 The latest Bridgend Council (BCBC) webcast returns to the Development Control Committee, and monthly meeting held on Thursday (March 31st). You can watch it here.

Two agenda items were worth flagging up.First up were proposals from Persimmon for 108 homes on playing fields at Ysgol Bryn Castell special school (formerly Ogmore Comprehensive) which lies between Brynmenyn and Bryncethin (pdf).

Before councillors began their deliberations, a St Brides Minor community councillor objected to the proposal due to traffic on the A4061 through Bryncethin, particularly outside Bryncethin Primary. Parents are fearful of crossing the road due to speeding cars while there’ve been numerous accidents. A proper crossing is needed but the community have been told it’s too expensive, and she pleaded for road safety measures in Bryncethin to be implemented as a matter of urgency.

Persimmon Homes’ representative said the 108 units were allocated in Bridgend’s Local Development Plan. The layout was discussed in detail and resulted in amendments to prevent overlooking other properties. Highways officers have no objections, and Persimmon would enter a Section 106 agreement to provide active travel facilities – including a pedestrian refuge/island. The transport assessment shows the development would have a “minor impact” on local junctions, so there were no transport reasons to reject the development.

Cllr. John Spanswick (Lab, Brackla) criticised a lack of public open space within the development. With over 100 homes there needs to be somewhere safe for children to play, but it’s close to a main road and two industrial estates.

He was disappointed there was no response from BCBC’s Parks and Recreation department, and he believed the development contravened Local Development Plan guidance on open space. He wasn’t against the principle of development, but it was a poor layout, and the £50,000 Section 106 agreement to provide play areas elsewhere wasn’t enough to convince him to vote in favour.

A Planning Officer said it was right to highlight that BCBC policy recommends a minimum amount of open space for large developments. However, BCBC adopted a specific development brief for the site (pdf) which allowed off-site playing facilities.

Officers explained there were prolonged negotiations to reduce noise levels, with the bungalows backing on to the industrial site being redesigned so bedrooms are to the rear and away from noise sources. There are particular problems with power washers used to clean lorries at food distribution company Weddel Swift as they’re used almost constantly.

Cllr. Gary Thomas (Lab, Bryncethin) wanted assurances the noisy power washers would be replaced. He was told by officers that work was undertaken at the industrial units to reduce annoying rattling to required maximum noise levels. The power washer is still just above those levels but BCBC agreed to underwrite any works needed.

Cllr. Janice Lewis (Lab, Bryncoch) mentioned the traffic island for this development, but nothing similar was being done for the A4061. Traffic estimates suggest the Royal Oak junction (with the A4065 Abergarw Road – the main access to and from the development) would be overcapacity by 2026 and she requested safety improvements for that area be included in the Section 106 agreement.

Highways Officer, Tony Godsall, said BCBC failed in a bid for Welsh Government finance to upgrade the junction as it didn’t meet the set criteria. He accepted there were issues with speeding in the area and a speed camera was installed near Bryncethin Primary. The development would add about 540 extra vehicle movements a day, which amounted to a 2% increase in traffic at the Royal Oak junction – not enough to justify an upgrade at this time.

Cllr. Dhanisha Patel (Lab, Ogmore Vale) asked how members could agree to a development that everyone accepts would make pre-existing situations worse? She also pointed out pressures put on Wigan Terrace and the Masons Arms roundabout and asked what delays (in terms of minutes) commuters would expect as a result of the development?

Tony Godsall acknowledged the impact on junctions but it wasn’t sufficient reason to refuse the application or demand extra Section 106 obligations. In terms of timings he said it amounted to an extra vehicle queueing at the Royal Oak traffic lights at each light cycle, and about 21 extra vehicles queueing across a rush hour.

Cllr. Haydn Morgan (Lab, Morfa) concurred with Cllr. Spanswick; developments of this size should be provided with play areas and he thought its omission was down to simple greed by house builders. Expecting children to play off-site is “absolutely ridiculous” and he would vote against.

Officers accepted points raised on play areas and BCBC are looking to adopt new planning guidance which would apply to future developments – however the site’s viability would be threatened with fewer houses.

Cllr. David Lewis (Lab, Penyfai) said a 2013 traffic count recorded 139,000 vehicles going past Bryncethin Primary School. Also, the A4061 is used as a short cut to/from the Rhondda, not just the Garw and Ogmore valleys. He didn’t believe the transport assessment was robust, as it described the Sainsbury’s supermarket at The Pines as “within walking distance” despite people having to cross Junction 36 of the M4 to get there.

The Chair, Cllr. Marlene Thomas (Lab, Llangeinor), said BCBC acknowledged inaccuracies in the transport report and those mistakes were corrected.

Cllr. Mel Winter (Ind, Aberkenfig) reminded the committee that proposals for a Bryncethin bypass go back 35 years, describing the existing A4061 as “absolutely horrendous” due to its accident record – often fatal. Bryncethin is “at saturation point” and he couldn’t support the application based on road safety arguments alone.

Cllr. Pam Davies (Lab, Bryntirion Laleston & Merthyr Mawr) questioned the drainage arrangements as the site was very boggy and there was scant detail in the application.

Cllr. Lyn Morgan (Lab, Ynysawdre) said good points had been raised, but they all relate to pre-existing problems. As the committee and council approved the development brief unanimously, they couldn’t turn down the application.

Cllr. Norah Clarke (Lib Dem, Nottage) asked who owned the site, and suggested the existence of a play area nearby made it illogical to get rid of it and provide funding for one elsewhere : couldn’t Persimmon sacrifice an extra house to make way for a playground?

The Planning Officer said the site was owned by BCBC and the playing area Cllr. Clarke referred to was part of Ysgol Bryn Castell. A Legal Officer then reminded members that ownership of the land is irrelevant in their considerations.

Councillors took an electronic vote, with 9 votes for and 6 against : the application was approved.

With more significant housing developments outlined at Tondu, the whole area stretching from Aberkenfig to Bryncethin is starting to become – if not an urban extension of Bridgend itself – then an unplanned sizable town in its own right (much like Talbot Green, Llantrisant etc.). Coleg y Dderwen is clearly becoming the focal point for the community, but it’s going to need a planned “town centre” in the longer run and a complete rethink of the local road network.

The second thing to flag up was an announcement on restoration plans at Parc Slip/Margam open-cast site near Kenfig Hill (pdf – see also : Parc Slip Restoration Proposals Revealed). The formal application was submitted a few weeks ago and is largely unchanged from the outline proposal I wrote about last November.

An extraordinary Planning Committee meeting to discuss the application will be held on May 4th following a site visit by committee members earlier that day (Neath Port Talbot Council are holding their equivalent meeting on May 3rd).

Due to the controversial nature of the project, the committee will waive restrictions on public speaking and give objectors and the applicant more time to present their case, as well as extra time for local councillors in the area to have their say.