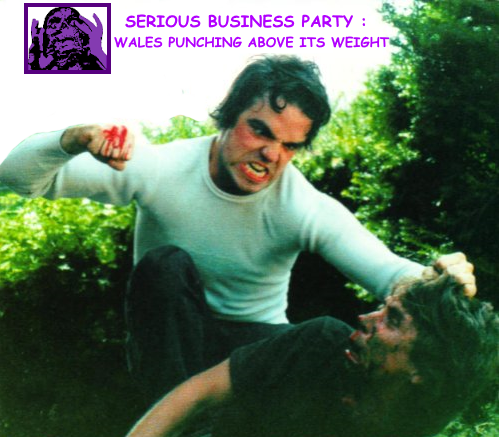 Journalists knew they were in for something different when Serious Business Party members started ‘cropping’ them and other guests as they entered the hall: tripping them up from behind by using a strong, sweeping kick.

Instead of canapés, the assembled audience were given Chinese burns, charley horses and noogies.

After the introductory rough-housing, they were directed by the party’s Director of Communications – an ex-nightclub bouncer wearing a mortarboard – to sit cross-legged in the centre of the hall in silence. As always there were a few stragglers, like Nick Servini, who was sour-faced after being picked last for British Bulldog and having his crisp sandwiches stolen.

The party had pulled out all the stops to impress the media, but they were interrupted by what sounded like a foghorn playing the opening bars to the theme tune to Deep Space Nine against the wooden floor tiles. The tentative silence didn’t last very long.

“Alright, who was that?” the director asks. “Shipton, I’m looking at you!”

Little did the assembled press pack realise that party members had infiltrated their group, “Hmmmmm, my chin’s itching,” one of the suspicious-looking non-journalists said whilst stroking an imaginary Tutankhamun beard, “chinny rec-kon it’s a conspiracy?”

“Yes,” another one said, “Ha ha fatty, you are fat!“ Turning their attention to the rest , they roll a £1 coin in front of the journalists, one of whom makes the mistake of picking it up. “Jew bundle! You’re such a Jew! Zionist murderer!”

An ambitious woman journalist, who’s starting to get annoyed by the undignified position the group find themselves in, shouts, “We were told this was a serious policy announcement not a….”

“Ooooooh,” the infiltrator says, wafting a hand in front of their nose. “It reeks of muff in here, doesn’t it? Kippers. Kippers and cheese.”

It was then that the Serious Business Party decided to announce their campaign to reintroduce bullying, which has already garnered full support from The Conservatives, Momentum and the Daily Mail.

“For decades we’ve been trying to convince ourselves that bullying is a bad thing. Instead, it’s one of the United Kingdom’s great institutions. We built an empire out of our ability to cause mischief and destroy the self-respect of other peoples, and one of the best places to develop that honed lack of empathy and over-compensating belligerence is our school system – private or state.

“Patriotic headteachers know this and that’s why there’s been no effort to clamp down on it. If ordinary Brits and their leaders lose their ability to project their own insecurities onto other people, where will it lead us? Do we really want to be as secure in ourselves and happy with our place in the world as the bloody Swiss?

“So we are proud to announce that if you elect Serious Business AMs in May, we’ll immediately get to work on a ring-fenced fund to train a new generation of salt of the earth, old-fashioned school bullies – with names like ‘Gripper Thomas’, ‘C**thammer Chris’ or ‘Jose Mourinho’.

“The Serious Business Party are disappointed that our young people don’t have the necessary skills to intimidate people in the workplace.
“Despite this, we’ve heard good things from one local authority-that-will-remain-nameless where an employee was treated with a fundamental lack of dignity by someone whose management style seems to consist of shouting and ostracism.

“Some might say that if you have to shout at someone to get them to do things when they’re four feet in front of you – and you’re not a sergeant major or in a stadium with 60,000 people making a racket – you’re probably not a very good manager.

“We say, we won’t rest until there’s a Wales where everyone dreads using social media or going to work or school in the morning, and where redundancy or the warm embrace of death seem heaven-sent.”

Another round of applause. 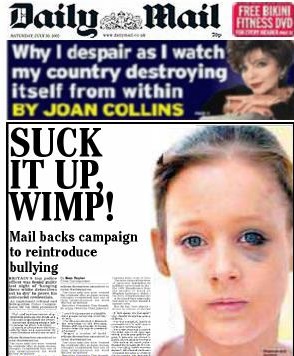 “No child should leave school without knowing how to make someone else feel three feet tall, especially midgets.

“Rest assured, whether you’re a wog, ginger, four-eyes, pole-smoker, canyon-yodeller, fatty, mong – or wearing a particularly expensive coat – the Serious Business Party will be one step ahead of you with an outstretched leg, ready to break your nose on the floor.”

“Don’t you think it’s convenient that there’s no universally accepted insult for angry, middle-to-elder aged straight white men?” one of the guests asks.

“Don’t be such a bigoted cockwomble! We used to be listened to, because we thought we were the only people worth listening too. But angry, middle-to-elder aged straight white men have been discriminated against for far too long. It’s time we fought back, and we’ll do that be voting Serious Business.”

“I think we learned something today,” Prof. Yogi Plopp – who was amongst the audience – says, “As exemplified earlier, calling someone a Jew as if it’s an insult, or a Zionist, is soooo 1930s Germany, as is accusing whole groups of people of possessing certain traits, whatever that group of people might be – Mexicans, Muslims, the English, Welsh-speakers, Man United fans….

“The holy grail is to be able to say something bigoted without actually coming across as a bigot as a result. It’s a challenge comedy scientists have been working on for centuries and they still haven’t figured it out. The brains trust on Twitter and Facebook haven’t figured it out yet either.

“Until there’s a breakthrough, people who can’t address an issue properly and simply resort to name-calling, gossip or labels at the first opportunity probably aren’t worth listening to. Also, media formats with a 140-character limit, or where news competes directly with cat pictures and photos of food, probably aren’t good platforms to discuss social and political issues, y’know?”

“Wrong!” the party spokesperson thundered back. “What we actually learned is that there is no such thing as a ‘safe space’ and people are more than capable of being complete and utter arseholes at any time, in any place, to anyone. When being an arsehole is properly directed it can even lead to profound change – sometimes good, sometimes bad.

“To think we tend to look down on nations which mandate that people can only say nice things about the government and politicians. If you can’t handle it, you probably shouldn’t be in public life or broadcast every single detail of your existence over a hyper-connected communications system, y’know?”
“Well we can’t both be right….” Prof. Plopp said, before he was cut off.

“Agreed”, the party spokesperson replied, somewhat deflated that their bullying campaign had ended before it had properly began. “If only there was some way we could disagree with people or facts without resorting to irrelevant personal insults or macho strong-arming?”

Looking at his own school uniform and those worn by party infiltrators, Prof. Plopp suggested, “We could try acting like adults.”