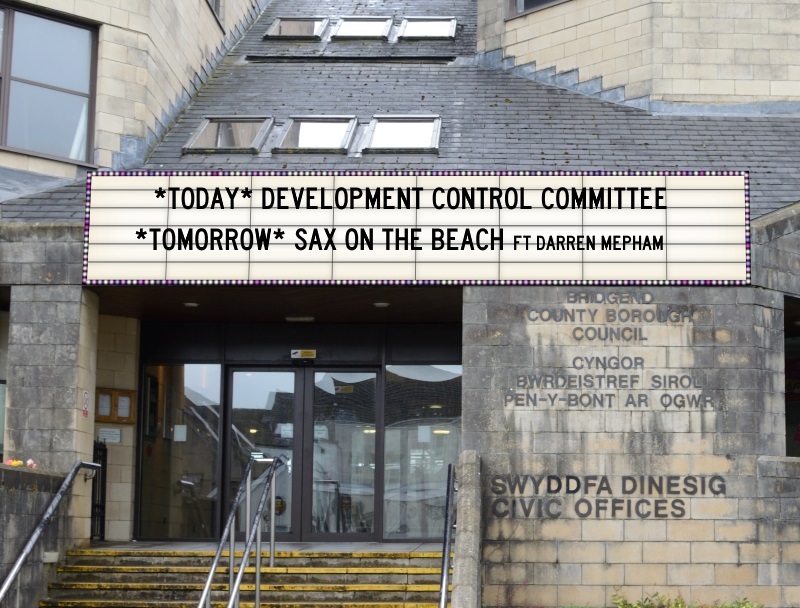 It’s been a long time coming but, at long last, Bridgend Council (BCBC) have begun the live streaming and recording of council meetings (Camera Shy).

Those who deserve the credit include long-standing campaigners for webcasting, Plaid Cymru town councillor and Ogmore Assembly candidate, Cllr. Tim Thomas as well as supporters from within the Bridgend Labour ranks like Cllr. Ross Thomas (Lab, Maesteg West)

Other Welsh councils are ahead of Bridgend on this, but after a process that started in December 2013 (yes, that long ago), and following numerous behind closed doors tests, January’s Planning Committee meeting was selected as the first recorded broadcast.

The broadcasts are part of a Welsh Government plan to improve transparency and accountability of local councils. Councils have often been a “closed shop” – holding meetings in the mid afternoon when people are working, or providing limited facilities for the public to see local democracy in action. Some councils have also been criticised for holding their meetings completely behind closed doors – notably including neighbouring Neath Port Talbot.

Live streaming means the meetings can be recorded and watched any time and, as a result, I can hopefully provide more detailed coverage of BCBC from now on.

The meeting was held on January 7th, though the webcast site (here) wasn’t officially launched by BCBC until last week. Until I can figure out how to embed the video, you’ll have to watch the meeting here.

After the usual housekeeping arrangements and declaration of interests, the first major item was an outline planning application for the first phase of a major housing development, Parc Afon Ewenni, near Waterton to the south of Bridgend(pdf) – next to the police club and soon-to-be-vacated council depot.

Cllr. Elaine Venables (Ind, Coychurch Lower) objected to a proposal to include a traffic light access to the development on the A473 (original proposals were for a roundabout). Elaine said it was obvious it would “hinder traffic in the area” and cause journey delays for residents already living in Waterton. A roundabout would’ve ensured more free-flowing traffic and would discourage drivers from taking detours via Coychurch Road to get into Bridgend to avoid the lights.

An architect’s representative said the proposed junction has been “fully evaluated” and “deemed acceptable”. The internal layout of the site is also indicative and could change.

The planning case officer, Elizabeth Woolley, gave councillors a presentation outlining the proposal, saying there would be a maximum of 240 homes, a 1,100 sqm “community hub” as well as the retention of the existing gymnastics club.

The decision was originally to be made in November, but was deferred to allow extra consideration of highways issues, particularly the creation of an active travel link towards Bridgend town centre.

Tony Godsall, highways officer, said traffic lights would make it easier to access the industrial sites and would provide safe crossing points for schoolchildren due to the isolated nature of the development. He accepted there would be traffic disruption, but it should be “minimal” and would allow people from Parc Ewenni to turn right towards Pencoed (and a roundabout wouldn’t? Just saying).

Cllr. Richard Williams (Lab, Hendre) shared Cllr. Venables’ concerns, suggesting traffic light cameras be provided to ensure drivers comply with the junction. He was told it could only happen in conjunction with the police and only at places with an accident record.

Cllr. Pam Davies (Lab, Bryntirion Laleston & Merthyr Mawr) asked what other precautionary measures would be put near the lights, suggesting the inclusion of rumble strips. Pam was told her concerns would be addressed when the final design is drafted.

Cllr. Lyn Morgan (Lab, Ynysawdre) said the development would have a significant impact on health provision, and it would be “right and proper” to advise Abertawe Bro Morgannwg of the possible impact on local GP practices.

Cllrs. Cheryl Green (Lib Dem, Bryntirion Laleston & Merthyr Mawr) and Cleone Westwood (Lab, Cefn Glas) asked how problems like safe routes to school would be addressed because of the development’s isolation, as well as asking which schools children living on the development would attend?

Officers repeated that’s why they decided to put lights there (to provide crossing points), though they was unsure which school catchment area the development would fall under (presumably it would be Llangrallo Primary in Coychurch and either Brynteg or Pencoed Comprehensive).

A local objector cited difficulties with the existing junctions on Cowbridge Road, issues with car parking and issues with flooding on the land, having suffered damage to his garage. He also believed the proposed three-storey flats were over-development and don’t fit in well with the area – the closest equivalent being on Waunscil Avenue.

The applicants described it as a “vacant site” and housing allocation in the Local Development Plan. There were more than enough parking spaces, and the number of extra vehicles was “negligible”. As the flats are within the centre of the site, they don’t overlook housing, while flooding issues have been addressed in technical appendices.

The planning officer in charge, Phil Thomas, said the scheme has been developed to create a “street scene” by having properties face Coychurch Road with their access to the rear. He admitted the number of parking places was below standard, but because the development is central to the town, a reduction is allowed. He also admitted that one side of the site is “boggy”, but the surface water would be taken away in pipes and a scheme is in the works with Dwr Cymru.

In an amendment to original plans, a crossing point and yellow box will now be provided at the entrance to prevent people parking across the access to the development.

Cllr. Norah Clarke (Lib Dem, Nottage) had concerns with the junction, but welcomed the yellow box. She didn’t want to see construction traffic coming and going in the area during peak time and asked for time restrictions during school hours (it’s a popular route for Brynteg and Bridgend College). The highways officer said time constraints could be enforced.

Cllr. Dhanisha Patel (Lab, Ogmore Vale) asked about a nearby bus stop and how that might be affected. The planning officer told her the bus stop is south of the development so it shouldn’t be impacted.

The application was subsequently approved. The other applications were approved with no objections either.

The only other significant discussion was on the development brief for Cosy Corner in Porthcawl (pdf). It forms a key part of the local street scene which compliments the Jennings Building scheme (see also : Jennings Building and (Old) Coety Primary Plans Submitted) and the renovation of Porthcawl Marina. BCBC would only consider alternative use of the site if a “landmark building” proposal came forward, so it’s due to be protected from “inappropriate development”.

Cllr. Cheryl Green added that she pleased to see the project progressing and thanked those responsible for the brief. Subsequently, the brief was approved unanimously.

The picture quality isn’t great and the camera’s shaky, but the sound quality’s good and the name tags work. As long as it’s clear who’s speaking (by name) that’s OK.

I hope this post proves to any councillors and officials reading this how useful webcasting is. It was interesting to see these things in action and the meeting was run efficiently. It’s just a shame it’s taken this long to get the system up and running. I’m not sure what happened to the Partnership and Governance Committee webcast, but my best guess is someone pushed the wrong button!

It does present a bit of a legal quandary for me though, because I don’t know whether I can name ordinary members of the public who speak on planning proposals (or anything else) without their permission for privacy reasons, so for the time being it’s probably safer I don’t name names – even if they’re clearly identified in the videos.