As I’ve covered previously, plans were announced in December 2013 for webcasting Bridgend Council (BCBC) meetings (Council webcasts coming to Bridgend?). After numerous delays (due to technical problems), this September was to see the start of webcasting. Detailed plans outlined that planning committee meetings would be broadcast as standard, alongside other key council meetings when warranted (New Date Set for Council Webcasts).

Disappointingly, but not surprisingly, webcasting has been officially delayed again, though BCBC’s reasons for the delay are beginning to get flimsier and flimsier.

Why are BCBC delaying it?

In recent correspondence between long-standing campaigner for webcasting, Pencoed town councillor and Assembly candidate for Ogmore in 2016, Cllr. Tim Thomas (Plaid, Penprysg), and Assistant Chief Executive of Bridgend Council/Monitoring Officer, Andrew Jolley, Mr Jolley told Cllr. Thomas that although new camera equipment has been installed, councillors will have to re-approve webcasting because of concerns as to whether existing budgets will enable simultaneous translation between Welsh and English – reportedly due to the impact of statutory Welsh Language Standards. These Welsh Language Standards aren’t just the Welsh Language Commissioner’s remit, but were part of policy championed by the Welsh Government minister responsible for the Welsh language….

…..a certain Carwyn Jones AM (Lab, Bridgend). You might’ve heard of him.

I presume Andrew Jolley is specifically referring to Standards 30-34. They state anyone speaking at a public meeting (which I guess includes council meetings) has to be able to use Welsh if they indicate they wish to do so beforehand, and also places a duty on public bodies to provide simultaneous translation.

My interpretation is that this will have to be provided at all public council meetings – including committees – and has no bearing whatsoever on webcasting, as it’ll need to be provided regardless of whether a meeting’s broadcast or not.

“I am passionate about opening up local democracy so that people living in the County Borough can be more informed about the decisions made on their behalf by councillors. The fact that councils across Wales have very tight budgets is more of a reason to open up our democracy and broadcast meetings, not less. By giving people the information and access to information they require, engagement with the public will improve and so will local services.

“….It is not acceptable to blame the cost of Welsh translation on the lack of progress on this issue when many councils already offer broadcasting in both languages….

“I call on the Leader of Bridgend Council, Mel Nott to clarify his Council’s commitment not only to broadcasting meetings, but to the Welsh language.”

What are the rest of Wales doing? 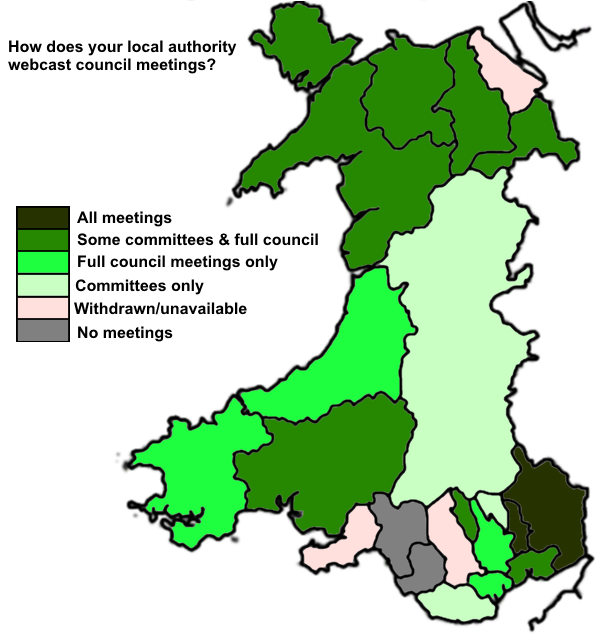 It’s worth reflecting on what’s happening around Wales to determine whether what BCBC are doing deviates from the norm.

Amongst those local authorities that broadcast full council meetings, they tend to last a minimum of 2-3 hours, with councillors making sure to raise local issues – this is particularly evident in Cardiff and Pembrokeshire. They don’t really need to broadcast committees if full council debates cover as many topical issues as possible.

Three local authorities – Swansea, Rhondda Cynon Taf and Flintshire – have piloted webcasting, but have either withdrawn the service or put it on hiatus.

Bridgend are unique in that they’ve approved webcasting but have never piloted it in public – apart from one Holocaust Memorial Day meeting in 2014.

So the only local authority in Wales which has outright refused to consider webcasting is Neath Port Talbot.

If two of Wales’ smallest local authorities – including one of the poorest – can manage it quite comfortably, why can’t Bridgend?

Why is webcasting important?

Last week, Cllr. Ross Thomas (Lab, Maesteg West) left a comment here saying it was right BCBC press forward with webcasting as agreed, but the committees are where most of the detailed scrutiny takes place as full council meetings were often routine.

I can’t argue with Ross’s assessment. Judging by the minutes, BCBC full council meetings rarely last longer than an hour and usually consist of announcements from cabinet members and senior council officers.

Despite that, there are full council meetings which deserve to be broadcast, especially when a debate threatens to break out on issues that matter to the people of Bridgend – such as the meeting to approve merger negotiations with the Vale of Glamorgan. Because minutes aren’t approved until the following full council meeting (usually a month later), details were scant (Ratings, Redevelopments and Rebellions).

Blaming the Welsh language is the last refuge of the intellectually lazy – a public policy equivalent of Godwin’s Law in Wales: “As the list of excuses for policy failures and delays becomes longer and more complicated, the probability that the Welsh language will be blamed approaches 1.”

If one were to be cynical, you could assume BCBC are delaying implementing webcasting long enough so they can use budget cuts in 2016-17 (and “the spectre of the Welsh language”) to justify suspending the idea indefinitely – even though the Welsh Government funded it, and the projected cost was (in 2013) just £1,000. The cost of translation is, admittedly, something to consider but will be based on the liklihood that Welsh would be used in meetings in the first place, and something more substantive that Bore das and diolchs.

There’s perhaps a old guard who would prefer local government to resemble a private members club, or one of the old Mid Glamorgan council committees, rather than a modern, 21stcentury democratic platform.

What goes on behind the doors of the council chamber stays in the council chamber. That means messages become very tightly-controlled, we don’t see councillors actually doing their job and the feeling that you can influence, or stay properly informed about, your local authority weakens.

In national surveys, Bridgend has consistently ranked below average on “Do you feel you can influence decisions in your local area?” and was ranked 21 out of 22 on service delivery satisfaction in the latest Welsh Government annual report.

Although the Glamorgan Gazette is holding up relatively well compared to its peers in south Wales – but still withering into a shell of its former self now that it’s moved to Cardiff – we’re heading for a situation in the short to medium term where Bridgend Council (or its successor) aren’t going to be properly scrutinised by the public at all.

Webcasts of council meetings will never be top billing entertainment, but it has to be done.