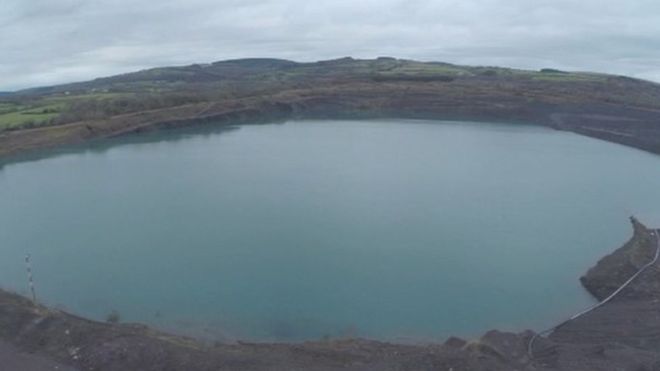 There were further – perhaps significant – developments on the Parc Slip opencast mine saga over the last fortnight, with Bridgend Council’s Planning Committee provided with an update by officers ahead of their meeting on Thursday (15th October) – which you can read here (pdf).

For more background on the developments this year :

You’ll all know of the difficulties Bridgend (BCBC) and Neath Port Talbot (NPT) councils have had in getting the owners of the opencast site to restore it, or at very least mitigate a serious build up of water in the hole.

Earlier this month, members of NPT’s planning committee claimed, via the South Wales Evening Post, that the build up of water threatens an Aberfan-style disaster. That, to me, seems slightly hysterical, but the water is certainly a potential danger. The committee voted to advise the mine’s owners to seek an alternative restoration scheme.

I’m going to presume the same information has now been passed to Bridgend councillors in this report, but it’s worth covering anyway.

Discussions with the Mine Owners

The Welsh Government Summit
The Next Steps
Good News or Bad News?

It’s unlikely there’ll be any Tellytubby “Garden Village” – those plans are now dead. Likewise, the owners accept there won’t be any additional coal mining.

The water issue will (eventually) be dealt with permanently. However, as we enter the wettest part of the year the current water levels need to be monitored carefully. Celtic Energy have again shown their contempt for residents and local authorities by saying they’ll turn off the pumps next year – that’s a very worrying development if no plans come forward.

The bad news is, of course, that the site will never be fully restored. If it finally brings this saga to an end then maybe it’s a price worth paying, as I’m sure everyone involved – from local residents up to the First Minister – are getting tired of it.

Even if it is partially restored, Parc Slip will serve as yet another reminder – as if we needed another one – of how bent business practices, lax governance and legal loopholes have enabled private companies to leave permanent scars on Wales in the pursuit of profits. I suspect it won’t be the last scar either.

Consequently, notice has been issued for a by-election (doc), which is due to take place on Thursday 12th November 2015.

There’s no news as far as I can tell in terms of candidates, so at the moment it’s unclear whether the election will even be contested.

It’s unlikely anyone reading this will be interested in standing, but if you are, you had better get your skates on as the deadline for submission of nomination papers is 4pm on Friday 16th October.