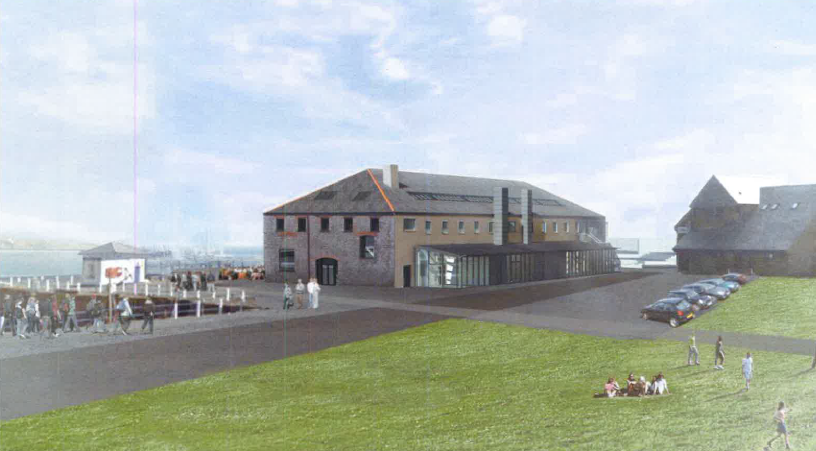 After being announced to great fanfare by Bridgend Council in March, formal plans have been submitted to regenerate the Grade II listed Jennings Building in Porthcawl Habour as part of the town’s wider regeneration plans.

The building was primarily used as a warehouse for iron products, but has also been used as a timber importers (Jennings & Co.), a search and rescue post during the Second World War and a skate park during the 1990s. It’s remained empty ever since, but remains a prominant coastal landmark.

The building is to be refurbished, with separate cafe and restaurant units on the ground floor – alongside a community room – and 13 “live work”units/apartments on the first floor. The nearby Old Customs House is specifically earmarked for an ice cream shop.

A new glazed canopy will provide access to the ground floor units, while a 19-space car park will be provided on a small section of Cosy Corner next to the RNLI station. It’s expected up to 30 jobs will be created. The building will need a lot of work done to it, and while surveyors found no reason why the building couldn’t be converted, parts of the exterior and interior are in a serious state of disrepair.

It’s a step forward in Porthcawl’s tortured regeneration, but it’s a small step. This wouldn’t really be my top priority, but it’s something to point towards as tangible progress.

BCBC have perhaps been unfairly criticised as delays have largely been out of their control – it’s not their fault supermarket operators have pulled out at the last minute, for example. Despite that, it’s clear Porthcawl’s regeneration is becoming something of a sore point for the ruling Labour administration.

In the letters section of this week’s Glamorgan Gazette, cabinet member for Regeneration & Economic Development, Cllr. Charles Smith (Lab, Llangewydd & Brynhyfryd), launched a blindside against critics of the slow pace of developments – particularly Suzy Davies AM (Con, South Wales West) – saying, “I believe constantly referring to regeneration efforts as ‘stalled’ is….doing the area a disservice. It’s easy to fixate on well-publicised setbacks….but why is it so little is being said on the positive regenerative developments?”

The Salt Lake site has to remain the top priority for BCBC as it’s the flagship regeneration site. Things like the Jennings Building and the recently announced cycle/foot route are icing and cherries on the cake. The trouble is there’s little in the way of cake so far!

There’ve been rumours and reports over the last few months that BCBC are in negotiation with developers to build up to 450 houses, an unnamed supermarket, leisure facilities and community/health facilities at Salt Lake. Fingers crossed something positive happens there, but there’s no extra news on that as yet – I’ll cover it as and when it’s appropriate.

See also: Bridgend Council Secretly Approves Playing Field Sell-Off (20.7.15)The new Coety Primary at Parc Derwen is almost finished, and pupils at the current, much smaller, school are getting ready to make the big move later this year. As a result, the process of disposing of the old school has started.

In addition to the Jennings Building application, a formal planning application has been submitted by Cardiff-based Scimitar Homes – who specialise in luxury, bespoke and executive housing developments in south east Wales – to redevelop the old school.

As expected – and as you can see from the plans above – it’s a small development of seven 4 and 5 bedroom homes and is likely to draw little, if any, controversy locally, but it will involve the demolition of all current buildings.

After the news that BCBC had sold off the school playing fields, I looked out for any statement on the future of the playing fields in the plans.

The playing field is described as “retained land” in the plans, so I don’t know if that means BCBC still own it for the time being, or whether it’s being kept aside by the new owners for a different purpose.