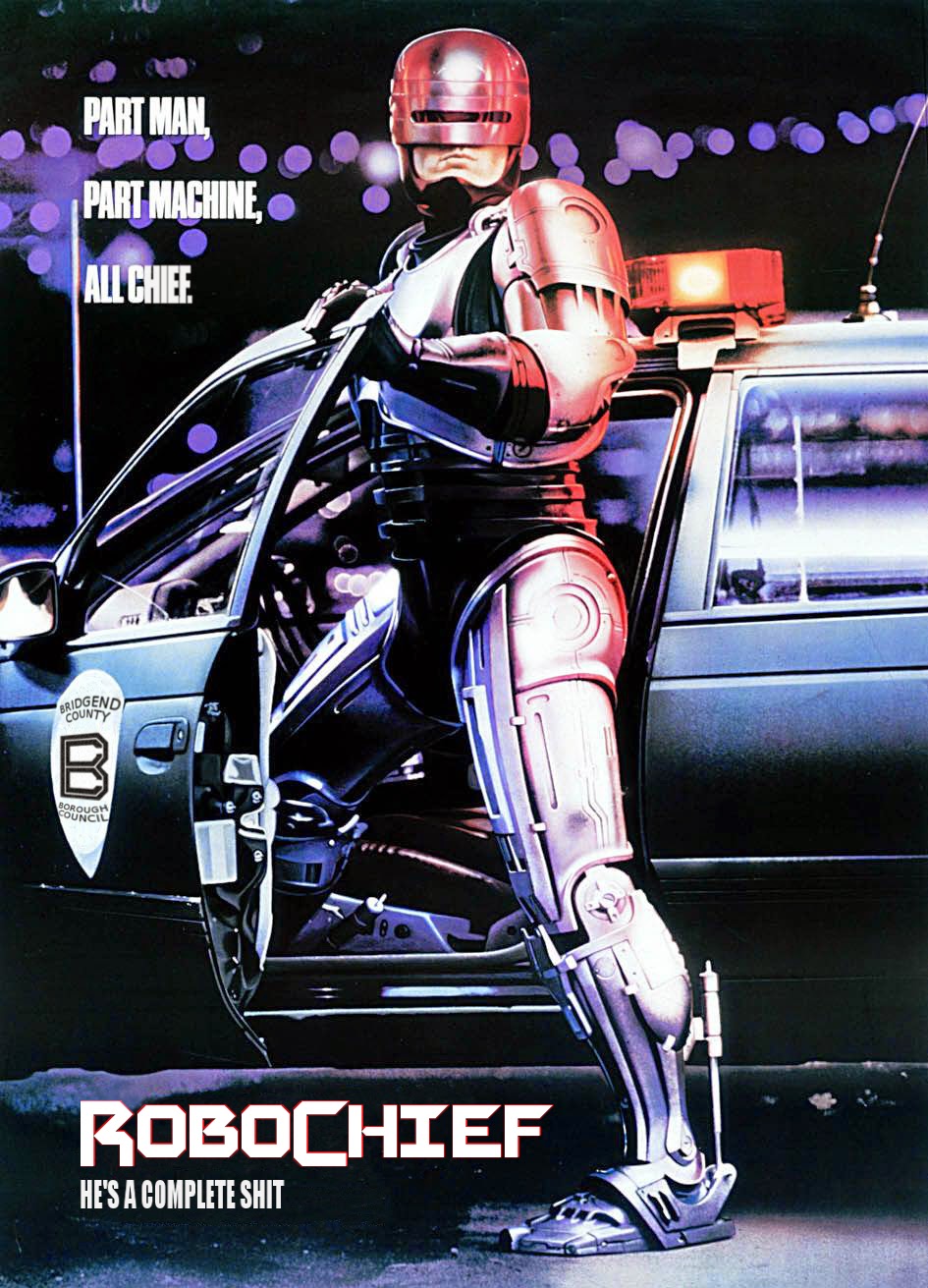 This is Media Wales. You give us three anonymous sources, and we’ll give you a stroke.

“‘What we know, is every council officer accepts inherent risks with the job. Ask any officer and they’ll tell you – if you can’t stand the heat, stay out of the kitchen.'”

“Officers identified the culprit as Clarence Bloggiter. Today he walks free, while PR specialists fight to save the career of the critically-injured officer. Good luck, Bryn!”

A car pulls up outside a chaotic Council HQ. Angry council taxpayers fill the lobby, while hard-working public servants take their tea break and discuss biscuits. A man approaches the main desk, staffed by a gruff desk chief, “Hi, Mark James. Transferring in from Wild West.”

“We work for a living around here, James,” the chief says, pointing a thumb towards the locker room.

Council officers jostle, trying to get updates, “His job’s still listed as critical.”

“Welcome to hell,” one officer says to the new guy. “What brings you to this paradise?”

“BCBC! What a bunch of morons!” Another officer shouts. “The Welsh Government are going to merge this authority into the ground. I’ll tell you what we should do. We should strike!”

The locker room falls silent as the desk chief enters, followed by an orderly carrying a cardboard box. The desk chief removes a label from a, soon to be empty, locker: PARRY-JONES.

“You can make donations to the family,” the chief explains, “Waitrose vouchers, gold watches, a position on a well-remunerated committee, via the usual channels.

“And I’ll hear no more talk about strikes!” he shouts. “We’re not plumbers, we’re council officers. Nobody would notice.”

James returns to the lobby to receive his first assignment, as a woman uses PowerPoint with extreme prejudice.

“Gravell,” the desk chief shouts, “when you’ve finished sending everyone to sleep, this guy Mark James is going to be your new partner.”

Elsewhere, BCBC department heads gather, as Old Mel Nott is understood to be giving the green light to an important project.

“Jones is showing off the ED series,” Kevin Madge tells his colleague, Calum.

“Don’t worry. When the project ran into delays Old Mel ordered a back up plan,” Kev says with a wink.

As everyone gathers and is seated, Old Mel gets started. “I’ve had this dream for more than a decade. It’s called Bridgenorteathbotshire Vale. In six months we begin construction where Old Bridgend now stands. I think it’s time we gave something back.

Carwyn begins his presentation, “What we know, is we have a contract to run local government. But at Sustainable Concepts, we believe we need a 24-hour-a-day council officer. An officer that doesn’t need to eat or sleep.

“Fellow executives, it’s my pleasure to introduce the future of local government. Leighton Andrews’ head, tucked up inside this enforcement droid, will seek out and aggressively merge local authorities.” 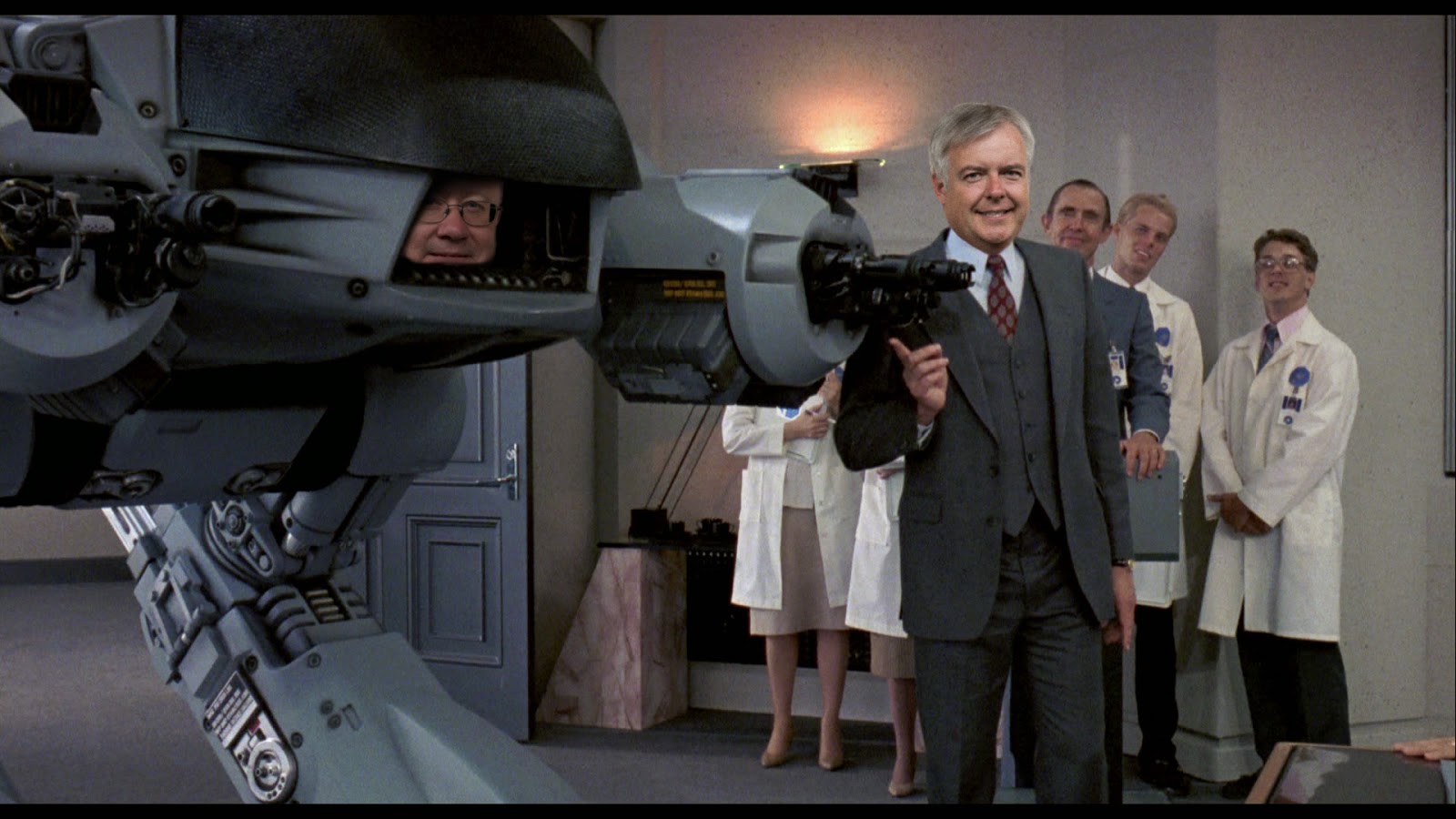 The droid enters through double doors, making a clunking noise.

“We’ll need a test subject.” Jones points to a board member. “Yes, Mr McCarthy. Why don’t you wave this Blaenau Gwent flag in a threatening manner?”

The droid pivots towards McCarthy, “Please put down your weapon!”

“Carwyn,” Old Mel turns to him with a face like a slapped arse. “I’m very disappointed in you.”

“Not as disappointed as Leighton is. It’s just a glitch.”

“You call this a glitch!”

“Um….uh….Middlesbrough had a RoboCop, why can’t we have a RoboChief?” Kevin Madge is quick to intervene to Jones’ chagrin. “All we need’s a volunteer.”

Gravell and James are drinking coffee when a report comes over the radio, “All units, suspected bloggers in Port Talbot steelworks.”

Without backup, they pull up, ready to collect evidence about the seedy underworld of the criminal citizen journalist. After they split to cover more ground, James comes across a gaggle of bloggers,“Don’t move! Dead or alive you’re coming with me! Gravell, I’ve got a situation here,” but she doesn’t answer. More bloggers appear, including Clarence Bloggiter himself.

“Well what have we here?” Bloggiter says, “You a good officer, hotshot? Sure you are, you’ve got to be some great officer. Coming in here all by yourself with no assistance from the local authority at all. I guess we’re all going to have our day in court? You probably don’t think I’m a very nice person?”

James’ body is ripped apart piece by piece by armour-piercing slander. He collapses in a pool of his own hubris. “Okay, fun’s over….” Bloggiter decides to show mercy by using the most libellous word in the English language,“….SLUSHFUND!”

Not much is left to Gravell to find, and there’s only so much medical science can do, “His ego’s going into shock!” He relives the trauma of people saying nasty things on the internet as everything goes dark.

“We get the best-a both worlds, see. The fastest press releases possible today, grievance-assisted memory and a lifetime of in-the-office programming.

“It’s my great pleasure to present to you….RoboChief”.

“What are your prime directives?” Kev asks.

“Serve the Libel Notices. Protect the Council. Uphold the Constitution.”

The new hero of local government enters the lobby. “Take my Porsche,” the desk chief says, throwing a set of keys which RoboChief catches in midair.

RoboChief’s first call is to the Llanelli Scarlets shop, where a neer-do-well was threatening staff, demanding to know where the taxpayers’ money is. RoboChief snapped their pen in two and walked out.

Next, a heavily-pregnant 15 year old is stalked by evangelicals, who question whether she needed an exorcism. Robochief was quickly on the scene, and instead of shooting the harassers in the nethers, throws them a winning lottery ticket, turning to the girl and saying, “Madam, you have suffered an emotional shock; I will notify a Christian bowling alley.”

Last but not least on this demanding first night, RoboChief was called to a council chamber.

“That ginger woman keeps asking questions, but the councillors want to leave for their afternoon nap.” RoboChief bursts through the wall, grabbing the councillor by the arms, saying, “Demanding answers to difficult questions is not on the agenda.” He sends the councillor through a window with a right hook.

Safe to say Kev was earning plaudits. Carwyn was less impressed at his plans being upstaged, “I remember calling the old man funny names when I was a councillor: ironbutt, boner. Once, I even called him ‘asshole’. But there was always respect. I’m number two around here. You’ve insulted me, and you’ve insulted BCBC with that bastard creation!

“I had a £50 bet with Leighton that we could create fewer than six local authorities! Who cares whether it works or not!” He points a finger in Kev’s face, “You better prey….that monster you created doesn’t screw up.”

RoboChief, resting in his chair as ordered by technicians – little people scurrying around him, just how he likes it – starts to twitch restlessly. Although his memory has always been selective, he has flashes to the incident that gave him all this power.

He also has flashbacks to a dream he once held dear. An empty farmhouse in his old district, removal vans driving off as he walks through its empty halls and rooms. A son turns to him and says, “Can you do that, Dad?”

RoboChief awakens, to the shock of the technicians. He marches off, feeling something but not remembering. He passes Gravell in a corridor.

“Hello….I haven’t really had a chance to introduce myself. I’m Gravell. Do you have a name?”

“How can I help you, Officer Gravell.”

“That’s not what I meant. Mark….it’s you,” RoboChief is caught off-guard. “You really don’t remember me, do you?”

“I have to go,” RoboChief responds as he marches past. “Somewhere there is a sustained campaign of harassment happening.”

The door bursts open, Clarence Bloggiter entering. “Bitches, leave!” he orders, as Pam and Linda scuttle out. He puts a DVD on, Carwyn Jones’ face appearing on every screen.

“Orrite, butt. Carwyn here. I guess you’re on your knees right now, begging for your job.”

Clarence puts a motion of no confidence on the table, with the required number of signatures.

“Not so cocky now, are you?” Carwyn mocks. “You know what the tragedy is here? We could’ve been friends. But you went over my head with the Wales Audit Office thing, and that hurt. Every game has a winner, and a loser.

After interrogating known associates, RoboChief tracks Clarence down to a crisp factory, where they were manufacturing pure rock salt and vinegar. “Clarence Bloggiter,” RoboChief says, as he throws the suspect through sheets of glass, “I am issuing you with a cease and desist order.”

“Anything you say may be used against you,” RoboChief throws him through another window, shattering transparency.

“I work for Carwyn Jones……Carwyn Jooooooones!” RoboChief smashes another pane of glass with Clarence’s body. “You work for BCBC….BCBC runs the knobs….” RoboChief grips Clarence’s throat so tight he struggles to speak out. “You’re….a….knob.”

“Yes,” RoboChief says, as his prime directive to uphold the constitution flashes up,“I am a knob.” 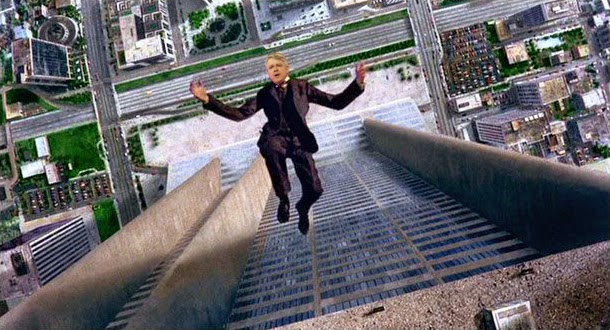 It was a difficult final showdown for RoboChief, but he successfully defended the council’s honour, as some bloggers went off course and crashed into a paywall.

In the BCBC boardroom, Carwyn is wrapping up another speech, “The council strike could work for us. We could have mergers in place soon and expect immediate public support. We’ll meet each challenge with the same aggressive attitude….”

RoboChief bursts into the boardroom, staring Carwyn down.

“Can we help you, officer?” Old Mel asks.

“Carwyn Jones is wanted for slander.”

Carwyn nervously looks around the room knowing the game’s up, as board members look at him with contempt.

“That mistake being me,” RoboChief says. “It really hurt my feelings. I’m not a mistake, I’m an CBE.”

Carwyn makes a gun with his fingers and holds them to Old Mel’s head, “We will discuss mergers very calmly or I’ll give you a local authority stretching from Caernarfon to Barry!”

RoboChief picks up a sheet of paper from the boardroom table. He scans it, and walks over to Carwyn, “That is not on the agenda.” He sends Carwyn through the window, his arms flailing as he heads towards the ground. RoboChief spins a pen around his fingers and sticks it in his pocket.

A board member takes a cartridge out of RoboChief’s adapted N64 and blows on it. The slurring continues after they reinsert it. “Shall I try turning it off and back on again?”