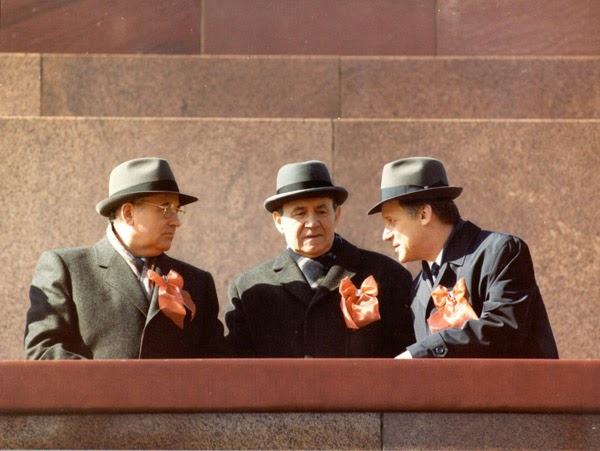 Huw David aside, their average age must be in the late 60s, and it’s public knowledge that some of them have long-standing health problems (nothing serious I hope), which has led to them missing meetings (though it happens rarely). There’s a clear need for fresh blood, and they remind me of Soviet leaders wrapped up to keep out the elements, watching the military parade past Red Square (ironically, this BCBC administration really do have a “thing”for military parades).

As the Glamorgan Gazette reported back in September, BCBC intend to appoint a sixth full cabinet member, who would be responsible for supporting current cabinet members in the delivery of the “Strategic Change Programme” (doc). The proposal will be put to full council tomorrow (pdf – Item 9).

As you might expect, the proposal hasn’t been greeted enthusiastically by either the public or the likes of former Bridgend Council leader, Jeff Jones. Jeff believes the “strategic” role of the new post should be performed either by Mel Nott (as leader) or the Chief Executive, Darren Mepham.

I’m inclined to agree with him.

Despite that, it’s claimed funding for the post (which will presumably come with the £29,000 bump in salary on top of the £13,300 basic allowance) is already in place. Also, the position will be reviewed next May, so it looks like it’ll be a short-term appointment (for now).

No names have been mentioned yet, but if you want me to pull names out of the air – based on their professional & political experience and what the cabinet might be looking for – I’d imagine the shortlist will include: Cllrs. Mal Reeves (Lab, Maesteg East), Charles Smith (Lab, Llangewydd & Brynhyfryd), Cherie Jones (Lab, Litchard) and Martyn Jones (Lab, Bettws). A return of Cllr. John Spanswick (Lab, Brackla) shouldn’t be ruled out either, but he previously stood down from cabinet due to work commitments.

I don’t think whoever’s offered the job need take it on so enthusiastically, especially when you consider what the new cabinet role will involve.“Strategic Change” is code for managing departmental reforms, which is in turn code for cutbacks.

At its most basic level, the new cabinet position is “Cabinet Member for Cuts”, and will entail wiping the proverbial backsides of the current cabinet members and taking all the resulting flak.

UPDATE: 17/10/14 – One of my shortlisted candidates, Cllr. Charles Smith – an economics lecturer – has subsequently been appointed Cabinet Member for Strategic Change.

There’s been a sharp increase in the amount of money BCBC need to save over the next four years as a result of the Welsh Government’s recent 3.4% cut to their settlement. The current budget has been planned on a presumed £36million in savings until 2019, but now that figure’s closer to £50million.

Although the budget won’t be finalised until next spring, and cuts to the settlement weren’t as bad as first feared, it promises to be a bloodbath.

I wouldn’t be surprised if we start to see library closures (those based outside the main settlements must be looking vulnerable), serious cuts to things like adult learning and adult social care, as well as the start of mass council redundancies. However, aside from the Garw Valley, I doubt we’ll see changes to schools to the same extent as those proposed in Rhondda Cynon Taf and Neath Port Talbot.

BCBC have launched a public consultation so county residents can give their views on where to cut £14.33million.

The consultation will include sit down meetings held around the county (details of where you can book your place are here), but it also includes an online survey and “budget simulator”. It takes around 15 minutes to complete and is available here.

Last week’s Gazette story on this was full of vox pops calling for a reduction in councillors and executives. Although I have sympathy with that view, you could get rid of every single councillor and reduce the number of senior managers to a skeleton crew and it would only save a few hundred thousand pounds. The cuts need to be made in the millions.

If you feel passionately that certain local services should be protected, then I strongly suggest you let BCBC know and take part in the consultation. Responses need to be in by November 17th.

I suppose you’ll want to know what I suggested after playing around with the simulator :

Although it’s a blunt instrument, it proves that even the council itself (admin etc.) takes the biggest brunt of any cuts – as I’ve done here – they’ll still need to charge more for services or increase council tax. Other options include stricter eligibility criteria for adult care (which could’ve saved £2.55million) or hiving off library and cultural services to a not-for-profit (saving around £365,000).

“Budget simulator” might sound like an incredibly boring computer game, but you quickly realise this is going to happen for real, and ordinary people in Bridgend county – our neighbours, relatives and friends – will feel the effects.

Two Major Collaborations On The Way?

As the title hints, two major collaboration projects involving Bridgend and neighbouring local authorities are at different stages of development.

Firstly, Bridgend and Vale of Glamorgan running a joint CCTV service (pdf – Item 11), which was first proposed at the tail end of 2013. Negotiations and administration has advanced to such a stage that a detailed breakdown of the costs can now be provided.

Secondly, there’s a proposal for joint regulatory services for Bridgend, Vale of Glamorgan and Cardiff covering licensing, environmental health and trading standards . Around £250,000 per year in Welsh Government grant funding has been provided towards this.

In an update to the full council (pdf – Item 8), it’s said trade unions have been briefed and all the joint administrative arrangements are ready to be put in place.

One big sticking point so far has been the decision on which local authority will host the service. It would be cheapest to host it in Bridgend (£6.9million per year costs, compared to £7.2million in Cardiff). Vale of Glamorgan is put forward as the “most balanced” choice to host it as it would affect Cardiff-based workers the least (as they make up the greatest numbers).

If everything stays on timetable the new joint service will be up and running in September 2015, and it could save Bridgend alone some £350,000 in operating costs and some £1.4million across the three councils over the next three years. However, trade unions and other interested parties have raised concerns about job transfers due to the complexity of the arrangements and the impact the collaboration might have on the professional standing of officers.

BCBC already collaborates with the Vale on civil parking enforcement (more here) and it appears to be working well so far.

Yet again though, BCBC is showing a preference to work with the Vale of Glamorgan (I’d imagine the Vale would rather merge with Bridgend over Cardiff as it would be a bit more balanced), while the Welsh Government and Williams Commission press for a merger with Neath Port Talbot.

I’m not sure if all these collaborations with the Vale are going to cause problems when the merger process begins to ramp up over the next year or so.

In my last visit to Bridgend on this blog, I said there had been a serious delay to the broadcast of council meetings.

I also said that as I didn’t own tin foil head wear, I presumed there was a technical explanation. That’s indeed the case, and the precise reasons for the delay were revealed at last week’s cabinet meeting (pdf – Item 15).

BCBC also confirmed in a Twitter conversation with @Bridgend and myself earlier that further announcements on this are due soon (presumably what I’m going to cover now).

Although the council chamber was upgraded in 2006 and is considered one of the most modern in Wales, BCBC say the audio-visual and IT systems are fine for basic meetings, but after testing them, they wouldn’t be up to the standard required for public broadcasts.

To fully meet requirements, they need to install three cameras, provide the Chair with a way to see what’s going on (via a computer) and improve display facilities (BCBC has an electronic voting system, for instance).

BCBC have therefore waived usual contractor rules and appointed the current company responsible for maintaining the systems to complete the required works by November 30th. The cost will be at least £1,000 and will come from a Welsh Government grant.

It’s disappointing that it’s taken this long to do something this simple, but my guess is broadcast of council meetings will start early in 2015.

UPDATE 22/10/14: Cllr. Ross Thomas (Lab, Maesteg West), has said in the comments section that webcasting is due to be delivered by March 2015.