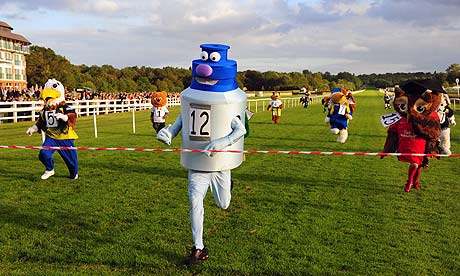 BCBC’s cabinet, and red-faced officers, are chased by an angry crowd of Porthcawl residents in a race to be the first to flush out a Morrisons executive and brain them. Temporary road closures and diversions in effect. (More on this from me next week).

Following the success of the Elf-steddfod, Bridgend will attempt another world record. This time, the goal is to have the largest number of chuggers in a single space. Coloured bibs will be provided. Dreadlocks, veganism and a sanctimonious expression optional. Temporary road closures and diversions may cause disruption. BCBC are minded to give no assurances that anyone will die.

Just before sunset on St David’s Day, one of Bridgend’s few remaining lesser-spotted Welsh-speakers, Lloyd, will be hauled in a torchlight procession from Llangynwyd to Bridgend town centre in order to find a mate and continue the propagation of the endangered species. It’s hoped this will ward off the Hounds of Annwn for another cycle.

Lycra and furries collide, as exercise enthusiasts experience the full joys of Bridgend’s roads and rights of way. Highlights include the sentient overgrown stinging nettles, the Nolton Street steeplechase, the pothole ankle twisters and the puddles of sick. Water points include the Tylers Arms, Oldcastle Inn and Mason’s Arms. Temporary road closures and diversions will be in effect.

“Oh! OH!!! WHEREARARUFOR TOO!?” The people of Bridgend will raise awareness of hearing problems by “talking” to each other from either end of the street of their choosing. Taxi drivers, bus drivers and binmen will be drafted in to play their part. Sponsored by the Tair Pluen.

2nd Batallion (Queen’s Own) Pavementeers of the Royal Carillion Regiment will be granted the freedom of the County Borough of Bridgend, parading through town in full fluorescent gear and hard hats, alongside a procession of those mini dumper trucks with the bucket on the front. May involve road closures and temporary diversions.

The world’s most generous dog bowels will hover over Newbridge Fields for, what the Daily Mail describes, “The Crufts of Dog Poo”. The current favourite is a Great Dane which holds the world record at 28kg. It’s said to be facing competition from a Yorkshire Terrier residing on Park Court Road that’s rumoured to produce excrement bigger than itself. Street art installations will be dotted around the county, with children encouraged to get hands on to ensure a long-lasting legacy.

This tradition started in 1886. Popular 25 stone ironworker, William William “Gambo” John Williams, was dragged from his home to Cefn Cribwr Ironworks on the back of a makeshift trolley after illicitly-brewed potcheen rendered him blind. The procession stopped at each public house along the way to hand over to the next group volunteering to pull the cart. When Glamorganshire Constabulary prevented the relays from continuing their progress, a riot ensued, and is faithfully re-enacted each year since. Temporary road closures and diversions may cause disruption.

Somerset’s farmers reinforce their trans Bristol Channel friendship with the annual donation of a cloud of tear-inducing bovine gas, joined in marriage by a cloud from the Vale of Glamorgan. Temporary road closures and diversions possible.

Two weeks of attempted arson to commemorate politicians not being blown to smithereens explodes in a blaze of glory with a wheelie bin fire in Brackla. It moves to a tyre fire in Ogmore Vale and, finally, a North Cornelly kitchen is scheduled to go up in smoke via Poundland indoor fireworks. Sexagenarian firefighters will huff and puff their way around the county because they’re unable to retire.

As 2014 draws to a close, the most eagerly-awaited night of the year promises to be the best yet. DGD ’14 will include : street choral singing, street boxing, the Wildmill Stiletto Dance (a form of Morris dancing performed by women, who tap each other with shoes and dance in a circle by grabbing each other’s hair), lashings of frites au fromage and the local custom of exchanging small, clear plastic bags of flour and paracetamol. Katherine Jenkins OBE will kick off this year’s festivities by squatting in the glimmer of a police van’s headlights on Derwen Road for the traditional, celebratory “First Piss”.