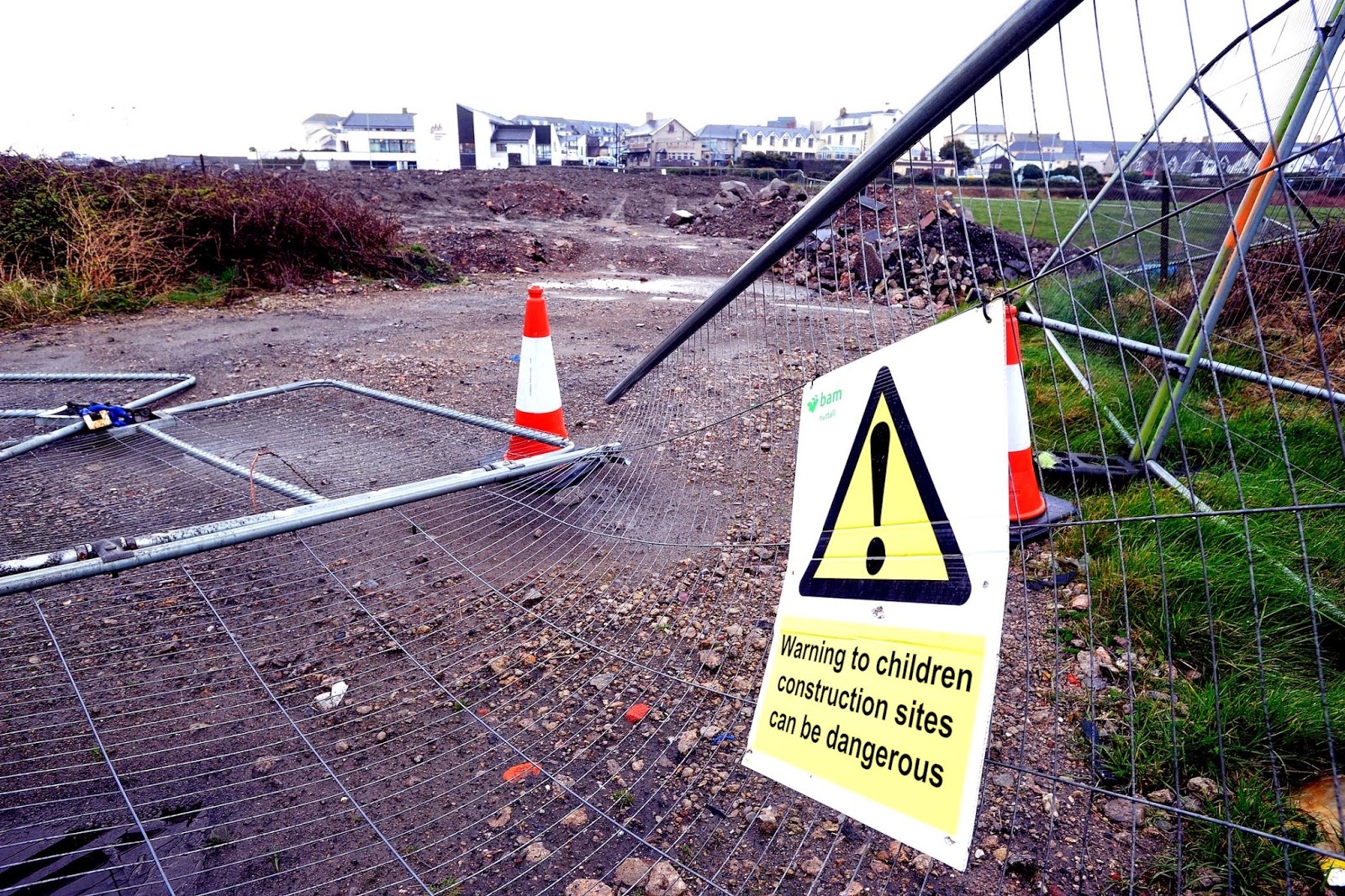 As promised last week, I return to the Porthcawl regeneration saga. Full details of the proposals, as they were in 2012, are included in my blog Whither Porthcawl?

As anyone closely following events knows, in July 2012, Tesco pulled out of a deal to build a new supermarket at the Salt Lake site – a key part of the regeneration plans. Bridgend Council went back to the drawing board, managing to get a deal with Morrisons.

Just before Christmas, BCBC announced Morrisons have also pulled out of the deal, and instead opted to open a smaller store off New Road as part of a residential development.

At the time, the planning application (link here) didn’t make it clear who would operate the retail units, but alarm bells should’ve started ringing. It’s unusual for a major chain to want to open a smaller, local express outlet in addition to a large supermarket, especially in a relatively small town like Porthcawl.

If you want further speculation, Mango Planning and Waterstone Estates – the same agents for the New Road development – actively pressed BCBC to reserve part of South Wales Police HQ for a new food store during the Local Development Plan process on behalf of Morrisons. Morrisons could be more interested, therefore, in basing a store in Bridgend rather than Porthcawl (pdf).

That’s no reason to panic, as Sainsbury’s were held in reserve for Salt Lake, so supermarket chains are interested in Porthcawl. However, something clearly spooked Morrisons, and could spook other interested parties.

Cllrs. Sean Aspey (Ind, Porthcawl W. Central) & Brian Jones (Ind, Porthcawl E. Central) told the Glamorgan Gazette last week that the people of Porthcawl are “close to revolt” after schemes persistantly fall through at Salt Lake, and after delays to other projects.

They believe the proposed store was too large, that the deal with the leaseholders of Salt Lake (Evans families) for key development sites should be scrapped, called for more local involvement, and want greater transparency in future.

The problem with that is with BCBC looking at tens of millions of pounds in spending cuts, many proposals Porthcawl might residents place at the top of the shopping list – like a new swimming pool – are unlikely to ever go ahead.

The projects so far – like the marina expansion, watersport facilities, roadworks, and the proposed refurbishment of the Jennings Building (pdf) – have been/will be funded wholly or partly by public funds or things like lottery grants. That also includes improved coastal defences, which after the weather over the last few weeks and damage to things like the Wales Coastal Path couldn’t come soon enough

Retail and housing developments are supposed to be the private sector’s contribution, but clearly private companies think something’s up.

I suspect, and others do too I guess, that clauses within the (undisclosed) land deal between Bridgend Council and the Evans families have made development unattractive, combined with a more cautious approach to housing and retail developments since the Great Recession.

The details of the land deal are confidential and were given to BCBC’s cabinet years ago when the Tesco deal was still on the table.

I neither confirm or deny if I’ve seen the figures involved but, as I understand it (chunks of this were reported in the Glamorgan Gem in February 2011), the agreement set a minimum price of £12.5million to be achieved in Phase 1 (Salt Lake), which was potentially worth up to £5million to the Evans families due to the well-publicised 60/40 split between BCBC and themselves.

Up to 70%+ of it would’ve come from the earliest land sales relating to the supermarket, meaning the Evans’ would’ve got most of their money upfront with minimal risk to themselves, and all of the remaining risks falling on BCBC and the developers.

BCBC’s officers would’ve been aware of the risks, and would’ve told the cabinet and others about those risks. Those risks would’ve included over-optimistic estimates for the amount of money they would receive for Salt Lake due to the economic downturn, and over-optimism with regard the timescales it would take for a supermarket to be built and the cost of building it.

There would’ve also been other problems, like funding to provide the new road network, which I’ve mentioned before (Porthcawl regeneration – Bridgend Council’s risky business).

The development at Coney Beach & Sandy Bay (Phase 2) also has a similar agreement in place, and would be even riskier because it’s dependent on residential development, mainly apartments. The number of new homes to be built there have since been downgraded in the adopted Bridgend Local Development Plan.

Figures of a minimum £25million in land sales have been mentioned in order to convince the Evans families to shut Coney Beach; while the use of a Compulsory Purchase Order (CPO) for the land is likely to have been ruled out. Development of Phase 2 could also take, not years, but decades.

The natural reaction’s to blame Bridgend Council – but it’s not that simple.

BCBC clearly want to get things moving in Porthcawl because it’s a millstone around their necks. The statements from Cllrs. Mel Nott (Lab, Sarn) and Phil White (Lab, Caerau) when Morrisons pulled out underlines the palpable disappointment felt on Angel Street, perhaps panic too.

My criticism of BCBC would be that they haven’t been upfront from the start, and lack of transparency is endemic across local government in Wales. Although BCBC are generally “well behaved” compared to the likes of Carmarthenshire, this is looking like a botch job.

If there was a bit more honesty, not distractions like public meetings with Carwyn Jones, the people of Porthcawl might be more forgiving.

The focus should now shift to the land deal. It looks like it was a particularly poor deal (from a BCBC perspective) to keep the Evans families sweet so they would look favourably to developers when the time came. None of that’s materialised as expected, as the minimum sale price agreed between BCBC and the Evans families is unlikely to ever be achieved.

Off the top of my head, we’re looking at three options really.

The first is to hope BCBC can pull a rabbit out of their hat in their talks with Morrisons, or hope Sainsbury’s and Tesco are still interested. Porthcawl is generally wealthier than Bridgend and could sustain a larger Waitrose store like the one in Cowbridge – which could draw supermarket snobs from as far away as Swansea.

It might happen – and I hope it does, to be frank – but the Morrisons quotes in the Gazette report aren’t cause for hope, while Morrisons performance over Christmas hints they have bigger problems to deal with. You could also suggest CPO-ing the land, but that would be a drawn out process that could end up in the courts.

The second is the “nuclear option” of pulling the plug on all non-active developments, rip up the Evans land deal, and start over, taking the current state of the Welsh economy into account. If I’m honest, I’m surprised it didn’t happen years ago. It’s unlikely though because it would make BCBC officers and Labour councillors look like clowns (maybe unfairly).

The third, and perhaps best course of action, is to stall the supermarket project for the time being and let the Wales Audit Office take a look at the land deal – not to apportion blame, but to clear up its value for money and help determine, once and for all, why developers and interested parties might be getting cold feet.

Porthcawl residents deserve up-front accounts from those at the top. Saying everything’s fine, and that everything can be dragged back from the brink by a couple of meetings (public or private) is insulting their intelligence.

Panto season’s drawn to a close, but constant calls of “Oh not it isn’t! Oh yes it is!” make this a comic farce worthy of the Pavillion stage.