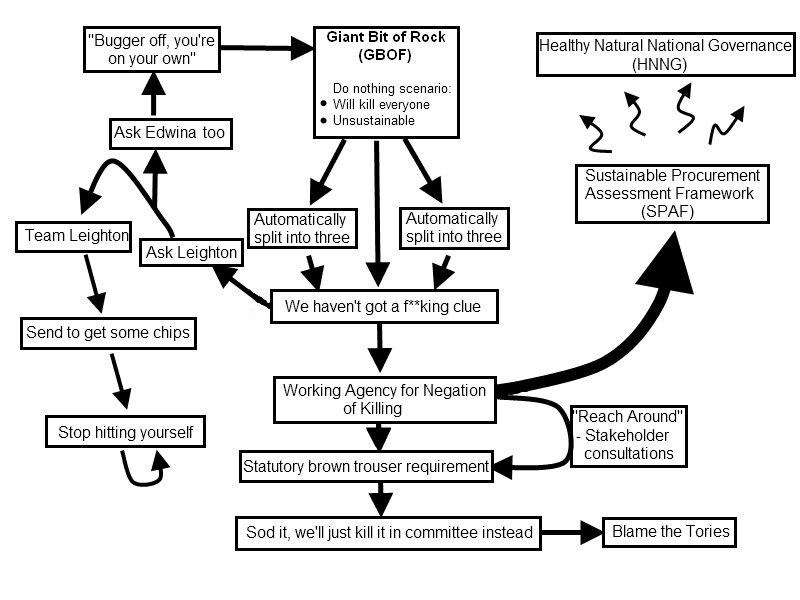 The First Minister had many reasons to be cheerful. The health service was running smoothly, with  hospital reorganisations well-received by a grateful public. Education standards are the envy of Western civilisation, while the Welsh economy was pushing towards the top of the table within the UK. Everyone was patting him on the back as he walked to the stage to give his speech.

Then he woke up.

He decided he was going to give his party a long overdue kick up the bum. After failing to match the genius of 2003’s Orrite, mun! I’ve got-a tools out ‘aven’t I?, and facing competition from Plaid Cymru’s, Look at-a bloody state of this yur! Welsh Labour needed a new fighting slogan.

He unveiled it to applause – Welsh Labour – Yeah, we’ll do it now in a minute.

“….We want people across Wales to feel that electing Labour is a bit like getting your cousin’s boyfriend to do the carpets on the cheap. Electing Labour, is like a mechanic tutting and pursing their lips, before telling you they need to order an expensive part from Vietnam that’ll take 8 to 12 weeks to arrive.

“When you elect Labour, you can be confident, safe in the knowledge that while you want us to do the gardening, clean the guttering or unclog the toilet; we’ll have just put our feet up in front of an interesting documentary on the Hitler Channel – and we’ll stay there until Babestation comes on!

After a rapturous applause, he continued.

“What we know, is that we cannot underestimate the importance of the union. I say this to the Scots.

“I realise none of you know who I am. None of you will be able to recognise me if I passed you on an Edinburgh street. None of you will see or hear my perfectly reasonable suggestions. But we in Wales have proven that you can get something loosely resembling milk without ever seeing a cow. Like magic it is. Good deal, innit?

“Imagine the sheer economic clout Scots will have being able to set air passenger duty for long haul flights, without the same power to set VAT, Corporation Tax or National Insurance. Without full membership of the international community and its financial organisations. Without any sort of significant power to make their people’s lives better. Paper round politics – it’s our shared future!”

Buzzing after a successful conference, the mood whip-lashed as the cabinet met and were informed of a serious event that demanded their attention.

A suspiciously-orange, head-shaped object was identified by scientists approaching Earth at 60,000mph, wobbling back and forth as if it were about to give the whole ecosystem a Glasgae Kiss.

The cabinet were told that when HainP2013 collides with the surface – somewhere off the Bristol Channel – it’ll unleash the equivalent power of a thousand times the world’s entire nuclear arsenal, which caused Carwyn’s eyes to light up. It’ll also turn the surface of the planet into a sulphurous mass of molten rock, eliminating all traces of life – which caused both Carwyn’s and Edwina’s eyes to light up.

The news prompted the Welsh Government to strategise a new framework to tackle the issue in a fundamentally sustainable way.

A Ministerial Advisory Group on Dangerous Bits Of Rock was convened, attended by people nobody will have heard of – including well-remunerated local authority chief executives. Their experience of astronomy was limited to episodes of Star Trek : The Next Generation and Space Precinct.

The Carmarthenshire representative openly wept when Space Precinct was mentioned, threatening “unstoppable war” against the “half-baked gangsters” who cancelled it. They got into an altercation with another big wig, accusing the opponent of “imperialist slander”when they insisted that Starbuck in the rebooted version of Battlestar Galactica was a woman.

As a result of that failure, the Welsh Government set up a Committee for Risky Astronomical Phenomenon. This time it was full of cross-eyed octogenarian local councillors who lost all higher faculties during scrum collapses in the 1950s.

They duly appointed an Astrological Research Senior Executive, who informed them that romance was on the cards because Venus was in Capricorn, but insisted they, “….get a proper astronomer, ’cause that rock you’re on about will kill everyone if you don’t sort it, see.”

Shaken by the evidence that the giant chunk of rock travelling at 60,000mph will kill everyone, the Welsh Government established a Working Agency for Negation of Killing, working towards meeting the requirements of the Sustainable Procurement Assessment Framework.

Some advisory groups were confused by the circular emails, seeing them as a call to arms. They were duly brushed aside, as this correspondence – obtained via an Indiana Jones style perilous quest (FOI) – outlines.

Thank you for your response to our email on the rock situation.

“Are you ready to rock?”

Edwina Hart AM
Minister for Business, Enterprise, Technology and Science

Leighton Andrews’ suggestion that they, “Get a big nuclear missile and shoot it! Dakka-dakka-dakka-dakka!” was rejected by the First Minister as too insensitive, and he also wisely pointed out that the risk of radioactive chunks of meteorite hitting land was too great.

As Leighton sulked and pouted, he aimed a finger towards Carwyn, “But you’ve always said, ‘Nothing declares a love for one’s country like slowly irradiating part of it!”

They tried to get the third sector on board, but they were rushing back over the Severn Bridge – their personal belongings tied down to car roofs and clutching briefcases full of EU cash. With the cabinet running out of options, they had no recourse but to turn to the civil servants.

As they made their way through the maze of corridors inside the Cathays Park crypt, the civil servants bounced around serenely as if they were walking on the Moon, moving and talking in slow-mo, operating in a different dimension of space and time.

To celebrate the festival of Due Diligence, the civil service insisted that their musical troupe – Cor Ty Cachu – perform the song of their people, which included what they described as a “topical twist”.

In just twenty minutes, they managed to turn one of the most famous power ballads into a thunderously bassy, bowel-churning, apocalyptic dirge – in a way only the civil service could.

By this point, the cabinet had left. Once the civil servants checked the coast was clear, and that they didn’t have anything new in the in-box, they returned to speaking and walking normally. They try to do this at least twice a month.With impending doom getting closer, and bums squeaking all round, the despondent Welsh Government decided to spin it, saying that, “Collaboration between a meteorite and the Earth’s crust is a safe and sustainable way to tackle unemployment, and affordable housing, by ambitiously slashing waiting lists of people.”Labour AMs were photographed smiling, with an artist’s impression of the burning husk of what was once Wales in the background.

Whilst the revelation that this was “good news” lead to the Welsh Lib Dems brainstorming ways for the Westminster party to take credit for it, the Welsh Government were left red-faced when it was revealed that the crisis was caused by someone accidentally leaving a tangerine in front of a telescope.

At the first First Minister’s Questions following the debacle, Carwyn used this revelation to attack and question the standard of the opposition. Somehow.