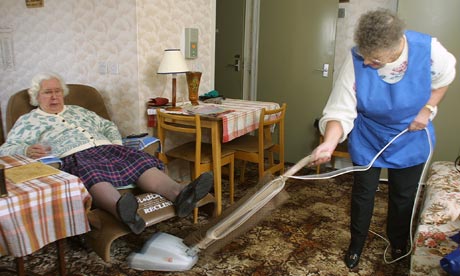 Yesterday, Bridgend Council’s Health & Wellbeing Committee met to discuss proposals to remodel home care (aka “home help”) within the county. The process has been ongoing since at least 2010, but some firm options have now been put on the table.

The Assembly’s Social Services & Wellbeing Bill will legislate towards more individual control over care, alterations to complaints procedures, changes to charges, as well as improvements to information people receive. This is said to be just one “driver of change”. It’s also estimated that the number of people aged 75 or over in Bridgend will increase by as much as 85% by 2030.

915 residents receive home care, with 676 of them receiving care from the council’s “in house” service and a further 239 from independent providers. Each person receives an average of 9.3 hours of home care per week, though it’s just 7.5 hours for the council’s in house service, and 14.4 hours for those receiving independent provider help – usually though, they have more specific needs.

The council’s aim is to move from “direct care” to a model based more on “assisting and supporting”. I think that translates as wanting people receiving home care to live more independently.

The cabinet approved the use of a “partner organisation” to provide home care and residential care back in 2011. In short, it looks as if the council want part-privatisation/partnership in a similar arrangement to that for leisure services. After meeting with up to 40 interested parties, it was decided that the council needed expert advice to take this forward and come up with new ways to deliver care.

The council have subsequently drawn up three options:

I think it’s unlikely that the council will retain in house home care as it’s described as “unviable”, so options two and three are likely to be the ones seriously considered by cabinet.

With caps on charges, and inevitable demographic and financial pressures, this has been coming for a while. It’s likely that contracting out aspects of home care will prove controversial because there’ll be concerns over the quality of care provided by private companies.

It’s also worth pointing out that nothing concrete has been decided yet, and all this still has some way to go – including cabinet approval.

Yet another Brackla housing development

More houses in Brackla, who would’ve thought it? Well, technically speaking it’s not in Brackla, but Coity.

An outline planning application has been submitted for houses and a mixed-use development on land between Wyndham Close (the far north eastern edge of Brackla) and the Coity Bypass.

There’s already an approved planning application from Linc housing for ~90 homes on the site, this latest application will take the total number of houses developed there to the ~330 mark. This is in addition to the 1,500 houses currently being built a stones throw away at Parc Derwen.

This new development will also include a three unit retail centre as well as some apartments.

The whole area – including Brackla Industrial Estate – was subject to a Welsh Government masterplan exercise back in 2010-2011, which proposed office development facing the A4061 and housing development towards Coity. This planning application isn’t surprising or too controversial then, although it unquestionably encroaches further on Coity village itself.

It looks as though Wyndham Close is going to be stopped up, meaning all industrial estate traffic from Heol Simonston will have to use a new road from the Coity bypass roundabout. I think BCBC have plans for Church Acre to be bus-only access in the future, and it’s already been traffic-calmed. I’m not sure how advanced those plans are at the moment.

The only “surprising” thing is who’s leading the development.

Who would be developing of former WDA land, sold in a bundle with lots of other land around Wales for a suspiciously low price? None other than South Wales Land Developments (SWLD) – who are also outlining a mixed-use development on another piece of former WDA land in the county at Pyle/North Cornelly.

I think this starts to clear up the situation regarding what SWLD are up to. They’re trying to get into the property development game legitimately it seems, but that’s what I suspected anyway. The question marks remain on the deal involving the land itself. Obviously the Welsh Government and Wales Audit Office are still investigating that and I’ll come back to it when they have something firm.