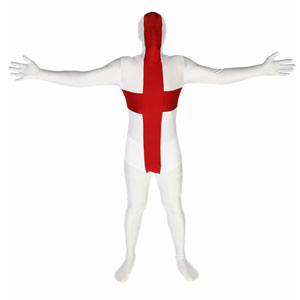 As he does a Captain Morgan pose atop a Cardiff building, Angloman growls his words out. “You wanted me, here I am,” he said. “I’m an angel keeping watch. Welsh-speakers and darkness take over the country. There are tens of millions of law-abiding English-speakers, and they cry out for my protection against this moral cesspool of Cymraeg.”

His valiant campaign has inspired many. I visited Ysbyty Ystrad Fawr, where a sad, lonely, elderly man was painting over the signs. “The NHS has been revolutionised,” he said. “Before, they might’ve thought the ambulances were delivering the Cymry’s secret gold, or the hospital was for Welsh-speakers only. They might’ve felt ostracised, see.

“Well, didn’t they have English anyway?” I asked. “Why don’t you just use a different colour for the Welsh and make English the top one?”

Later, I was greeted by a beaming headmaster – originally from Whitbury New Town – who was relieved he won his battle to rename Ysgol Pili Pala to the more inclusive and aspirational Duke of Winston Churchill Haverdisher-Smythe Academyspace for the Learning.

He puffed his chest out, proudly telling me, “We now foster bilingualism the proper, English way. It won an award in the Daily Mail.”

I passed a classroom, where a teacher was shouting, whilst pointing at the whiteboard, “DO. YOU. SPEAK. ENGLISH?”

“By getting rid of Welsh,” the headteacher said, “pupils can finally use the language of successful business. The language of Enron, RBS and Lehman Brothers. They turned into the next Richard Branson overnight.” He points to the former playing fields, “We had to construct a business park on school grounds to cope with the innate entrepreneurialism and value for money that results from being able to speak English.”

I asked a pupil what they thought, “I developed throat problems as the digraphs got stuck in my vocal cords. Now that I don’t need to learn my Welsh Second Language GCSE short course anymore, I’m using the hour saved to invent a perpetual motion machine – and I’m starting my own bank!”

“We’re proud the student-units gave up their Welsh lessons voluntarily,” the headmaster said. “It sends the right message to prospective employers that if they don’t want to do a subject, they can toss it aside. Just name one economically successful multilingual, nation. You can’t ca….”

“Low Saxon, Sorbian, Frisian, Danish. That’s before considering Turkish and Polish communities. All of them are officially recognised to an extent.”

“Well, if you count Welsh-speaking émigrés….”

“Pah!,”the headmaster waves a hand. “They all speak English anyway. Everyone in Wales speaks English too.”

“So,” I said, “you accept that English is being taught to first-language standard, even in Welsh-language schools?”

“That’s not the point. They should learn useful languages.”

“Don’t Welsh medium schools teach modern foreign languages as part of the national curriculum? Shouldn’t children – in certain parts of Wales – know the majority language of the area they’re living in? Is your objection that they are being taught Welsh at all?”

“….but they all speak English anyway.”

“So,” I said, “you accept that children are learning English to first-language standard, even….” I wasn’t getting anywhere.

Next, I visited a cheery manager of a big energy company, who was busy deciding how many pensioners will die of hypothermia this winter. “You would think those people who believe that the ink and paper of bill itself makes up a large proportion of energy costs would have some sort of brain infection.

“But thanks to these idio….sorry, concerned citizens…..everyone in Wales now knows that the reason they pay through the nose for energy isn’t because of our price rigging, complicated tariffs that don’t provide value for money or mismanagement of fuel stocks – it’s the Welsh language. Yup. It’s the Welsh language’s fault. Booooooo!

“We saved £50 in printer toner costs,” she continued, “and we’re delighted we’ll no longer have to pass those costs on to our valued custom….” She couldn’t continue because she did one of those laughs where you stop breathing.

French energy companies – inspired by Angloman – have decided to serve consumers in French-only in future, including those in south east England. UKIP MEP Crawford Fitzroy-Levillier said, “How can foreign companies build their power stations and windmills all over our country, and force the natives to use their bastardised tongue?

“Nobody in serious business uses frog croaking,” his face became redder as he sprayed biscuit crumbs into his moustache, “they’re all former colonies that don’t matter. They’re not America, or the Pitcairn Islands.”

“You realise knowledge of Spanish will become politically advantageous in the US in a few generations?”I asked. “And that, despite it being taken seriously there – percentage wise – there are fewer Spanish speakers in the US than there are Welsh speakers in Wales?”

“Bloody Welsh!”he said. “They should learn a more cost effective language! Like binary!”

“Clearly I didn’t make myself clear last time,” Professor Yogi Plopp told me. “Swansea now smells like Hong Kong in the 70s. I have rows of Wales’ top brass, legs akimbo in front of hot fans, working 24/7 to produce the volumes of essence required. The aim is to drop it from helicopters used to put out forest fires. I’m calling it ‘Operation Apocalypse Muff.’

“We’re also getting the Japanese to build the world’s largest deep fat frier on Anglesey. Chips, cheese and Caesium-137 is proving popular in Bridgend.”

I caught up with Angloman at their secret base – a Ceredigion farmhouse that once sustained jobs in the community but is now a source of renewable hot air. They said, “I have nothing against the Welsh language, or Welsh-speakers, but…

“We can’t go back to the days of children being given stickers for using the Welsh language in a Welsh language school in a Welsh-speaking area. That’s discrimination. Tantamount to child abuse.

“You need to expose their secret society,” they said. “You need to take away any semblance that they have a right to their own culture. There’s a billion strong English-speaking silent majority, who need to stand up in the crowd of apathy and make complete arses of themselves. After thousands of years of existing, everyone knows a website and a Daily Mail article will bring the whole Welsh house of cards down.

“They need to be constantly reminded of why it’s inferior. It should be ridiculed, so it has to justify its existence – and costs – to us on our terms because we say so.

“You can then either assimilate them, breed them out of existence or get rid of them. Then we can live happily ever after, in one kingdom, as one people and with one language. We shall build Jerusalem in Birmingham’s green and pleasant back garden.

“There are no historical parallels,” they said. “At all. None whatsoever. There are no examples of  ethno-linguistic minorities in Europe being turned on by a ‘silent majority’, whipped into a frenzy, that started as little things being taken away, and ended with people being bulldozed into ditches.”

They renamed the farmhouse from Glan-y-Mynydd to Cheesy Glans. “It’s simple really,” they said. “Nobody asked us to be here, or say anything – and we honest to God think we’re doing you a favour – but we haven’t given our personalities the equivalent of a gentleman’s wash.

“We’re not a threat, just an annoying bi-product. We’ll leave you with a nasty itch after giving the country a forgettable fumble, that’ll leave us feeling inadequate as you ask us ‘is it in yet?’

“That’s why she dumped me, the Welsh-speaking trollop! Tell me to ‘clean my helmet’ in your monkey speak, will you! I said I’d get her back! I’ll get all of them back! Made it, Ma! Top of the world!”

After calming down, they continued, “I realise the vast majority couldn’t care less about language issues. But some people will always be bad neighbours, and some people enjoy using ‘national’ newspapers as fluffers. It doesn’t matter where we come from, or who we are.

“We’re proud to be England’s smeg.”