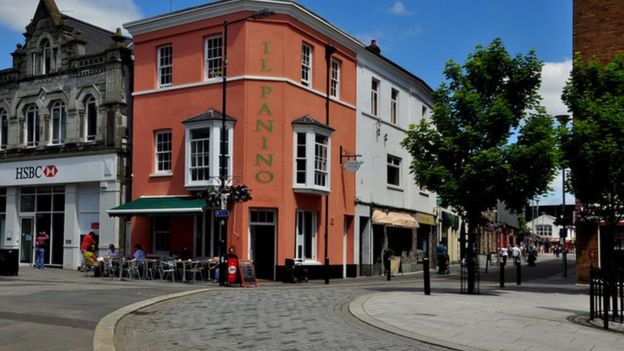 Bridgend is a growing town. The current developments at Parc Derwen are testament to that. However because it’s slap bang in between Cardiff and Swansea, it’s often struggled to keep up. The town centre has limited retail choice, while other towns in Wales, such as Carmarthen and Wrexham have managed to attract some of the bigger high-street names and anchor stores.

If Bridgend wants to keep up, it needs to keep growing sustainably to justify some of the investment we all want to see as well as to catch up economically with it’s benchmarks. That means seriously addressing the problems in the town centre itself and continuing some of the good work that has been done to date, such as the Georgian restoration projects around Dunraven Place.

Bridgend Council and Powell Dobson Urbanists have been working since 2009 on a masterplan for Bridgend town centre, largely supplementary guidance for the Local Development Plan that is still going through the various motions. Previous reports have found that the retail profile of the town centre is out of kilter with the socio-economic profile of the population of the town. The town itself and it’s catchment area are a wealthier/more secure than the retail offer in the town centre would suggest.

This week the council cabinet will meet to discuss the masterplan, which has been released on the Bridgend council website. It’s in two parts, a technical appendix (here) and the masterplan itself (here).

I’ve only flicked through it, but there are a couple of the key points:

All in all it isn’t a bad set of ideas, albeit some of the suggestions are a little obvious like the Embassy site. How do the council and various other parties make sure this vision can be delivered? Especially with a depressed marketplace and the unlikelihood that anyone is going to want to take big risks on retail for a while yet, especially in a town the size of Bridgend.

I’m disappointed that it looks as though the Rhiw Centre isn’t going to be expanded/redeveloped by any significant degree. There have been similar developments in Carmarthen and Wrexham as noted earlier, so it seems that Bridgend has missed the boat in that regard. It does look as though Brackla Street/Cheapside is going to be the main focus, and if properly linked to Nolton Street would effectively be a Rhiw extension by default.

If the mooted Island Farm development does eventually come about, and the Ravens and Bridgend Town relocate there, then where will that leave the Brewery Field? I don’t think the masterplan effectively answers that, but I guess we need to know something concrete about Island Farm before the council and the other relevant parties look into it in more detail.