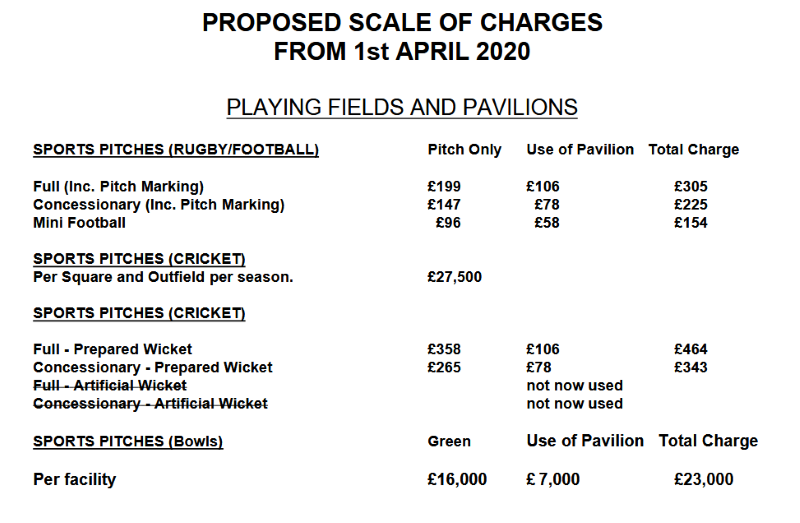 A meeting of a BCBC scrutiny committee was held this morning following a call-in request by several opposition councillors. A call-in doesn’t mean councillors can overturn a decision, but they can delay it or demand further information and reconsideration.

The meeting wasn’t webcast due to “technical problems”, but there’s a detailed thread from the Local Democracy Service’s Elizabeth Bradfield on Twitter (which I’m using to summarise).

Nantyfyllon RFC said they would “go bust” based on the proposed fee structure. This was a common theme. Bridgend Sports RFC described the charges as “eye-watering” while the Bridgend District Football League said the decision would decimate grassroots football.

Bridgend Town Cricket Club would need to find £54,000-a-season from next year to continue which would almost certainly result in the club’s closure. Tondu RFC said the council should expect peaceful mass demonstrations if the decision went ahead.

Wyndham Bowls Club criticised a lack of engagement by BCBC despite invitations for talks, while Bridgend Athletic RFC’s Rhys Jones said this policy flew in the face of a desire to get children physically active and away from computer games; he also suggested Community Asset Transfers (CAT) were being forced on clubs.

Brackla FC pointed to a £2million investment in sport in neighbouring Rhondda Cynon Taf, with RCT using Bridgend in a press release as an example they don’t want to follow.

Cllr. Keith Edwards (Ind, Maesteg East) criticised the lack of scrutiny ahead of the decision, with the CAT process remaining complicated and difficult to navigate for many organisations. Cllr. Amanda Williams (Ind, Coity) said fees for her children to play sport could rise from £750 to £3,750.

While Cllr. Nicole Burnett (Lab, Morfa) had sympathy for the council’s situation, it could’ve been handled better and with more creativity. Nonetheless, she wouldn’t vote for it to be sent back to the Cabinet as there were bigger areas of the budget which needed attention.

Cllr. Cheryl Green (Lib Dem, Bryntirion Laleston & Merthyr Mawr) – along with many other councillors – thought there were too many discrepancies within the report. There was also a lack of detailed information on how many clubs and how many people would be affected, as well as a lack of detail on a successor fund aimed at sport for young people.

Nowhere else to go

Cabinet Member for Communities, Cllr. Richard Young (Lab, Pendre), was sympathetic to the plight of the county’s sports clubs, but this was a culmination of ten years of budget cuts. There was nowhere left to go and the council’s finances “had hit the buffers” with an expected £30million worth of cuts due over the next four years.

Chief Executive of BCBC, Mark Shepherd, added that a long-term solution was needed and that while RCT has decided to invest in their facilities, it’s the exception rather than the norm – Neath Port Talbot, Carmarthenshire, Blaenau Gwent and the Vale of Glamorgan have all adopted similar policies to Bridgend. BCBC’s preference is for town and community councils to take on the facilities, not the sports clubs themselves.

Another officer suggested the fees are a guide for “full cost recovery” and could vary in the end.

Deputy Leader, Cllr. Hywel Williams (Lab, Blackmill), took criticism of the council’s approach to this on board, but CAT isn’t a new process and has been ongoing for several years. He called for sports governing bodies like the WRU to do more to support grassroots clubs.

In the end, councillors voted 4-3 in favour of referring the decision back to the Cabinet with a request for more detailed information.