It’s one of the most controversial policies of this Bridgend Council term, but members of a Scrutiny Committee will have another chance to query the performance of the new waste and recycling contract with Kier this morning (pdf).

Here’s a summary of the key points:

The council say that due to China changing its policy with regard to waste plastic imports, plastic has become less valuable on the international waste market. Quality is now more important than quality. As a result, it’s unlikely BCBC will allow recycling of black plastic (i.e. microwave trays) for the foreseeable future.

Kier accumulated just under 425,000 “contract points” during the first year of the new service. Each point is the equivalent of a black mark (missing a collection is said to be worth 2 points and missing a purple bag collection is worth 25 points).

BCBC hint that they’ve received compensation from Kier for the first year’s performance and there’s a continued financial penalty for accumulating points, but the amounts remain undisclosed for “commercial sensitivity” reasons.

The new collection vehicles are said to have made collection “more efficient” due to a higher carrying capacity as they can compact both cardboard and plastic.

Around 6% of calls took longer than 2 minutes to answer. Performance is said to have “measurably improved” compared to last year, with the recruitment of new customer service and operations managers said to be behind the improvement.

Litter enforcement is expected to start from spring 2019 (it’s unclear if this is also going to cover recent proposed policy changes regarding dog fouling too). The contract will initially be for one year, with the option to extend by another year.

Issues similar to those which have affected Kingdom Services – leading to a number of contract cancellations across Wales – were said to be a key consideration as BCBC shortlist providers for the contract. 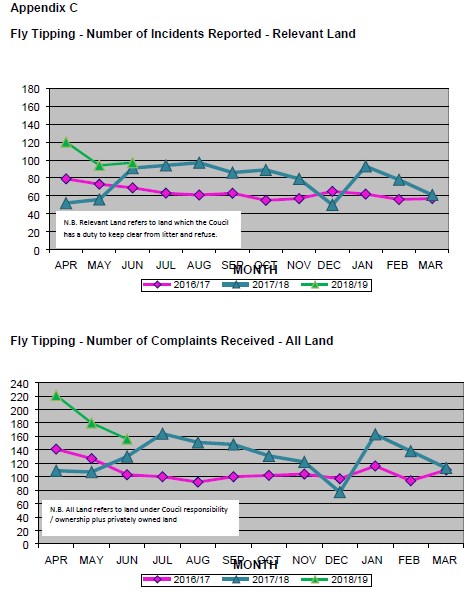 Reports of fly-tipping have increased compared to previous years but have started to stabilise and return to previous levels.

BCBC believe the increase is at least partly down to stronger enforcement of the “two bag rule”, which has led to incidents where households have put more than two bags out being recorded as fly-tipping.