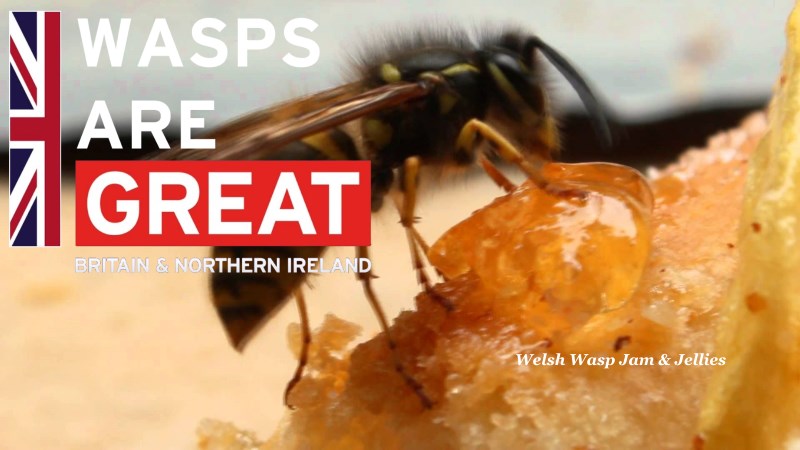 One of Wales’ leading waspkeepers has issued a warning over the uncertainty Brexit is causing their industry.

Watkin Tudur ap Bastard has produced his celebrated wasp jams and wasp jellies from his smallholding near the Brechfa Forest for 40 years. Watkin refused to divulge his production secrets, but there’s no doubt his produce was highly-prized. He proudly handed me a jar of ‘extra crunchy’ with a sticker saying, “By appointment to Princess Michael of Kent”.

His stall at the Royal Welsh Show was underneath a UK Government sponsored banner saying, “Wasps are Great”.

“I just want them to get a move on,” Watkin said of Brexit. “Out! Out! Out!” he added, clapping his hands before humming Tom Hark – as if celebrating a goal by one of the crapper Premier League sides.

“My main export market is France because the French will eat anything”, he continued. “But the Japanese will eat anything too and I’m also working on a squeezy wasp cheese for the American market.

“It’s a shame it’s completely impossible for Wales to trade or conduct business relations with Japan or America right now, but I’m….” Watkin was given an icy glare by the Secretary of State for Severnside before continuing.

“….positive that with the….talent…. at the UK Government’s disposal, their track record to date and their strong and stable leadership, they’ll be able to cope with these highly complicated negotiations.

“We just need a bit of certainty that they know what the f**k they’re doing. That’s all anyone who exports anything is asking at the moment.”

Greenland has a population of about 55,000, is 80% ice sheet and the rest is mostly barren rock with an economy almost entirely dependent on fishing. Greenland managed to leave the EU without much fuss and without cutting off their nose to spite their face in the process.

Leading Brexiteer and Man of the People ™, Eton-educated classics scholar, Randyl Hogg-Chiswick MP (Con, Royal Bunting), said there was nothing to fear but The Enemies of the State.

“All is well,” he said. “Brexit means Brexit. What that means, in the simplest possible terms, is that we’re going to Brexit in a most Brexity way. We have a plan, we just can’t write it down because whenever we do it falls apart as we all think Brexit means different things. There’s no need to panic as there’s still a good 9 months or so left to completely screw this up.

“Westminster is the Mother of Parliaments. It’s far from being an elderly mother of parliaments that’s suffering a bit of dementia and can no longer control her bowels.

“It is impossible to fathom how anyone could look at the majesty, pomp and breathtaking incompetence on display in London week after week, year after year, decade after decade, century after century, see where the UK is currently heading, then decide Wales would probably be better off running its own affairs.

“I can assure everyone that the powers the Welsh Government voluntarily handed back to us will be used responsibly. Your future is in our hands.”