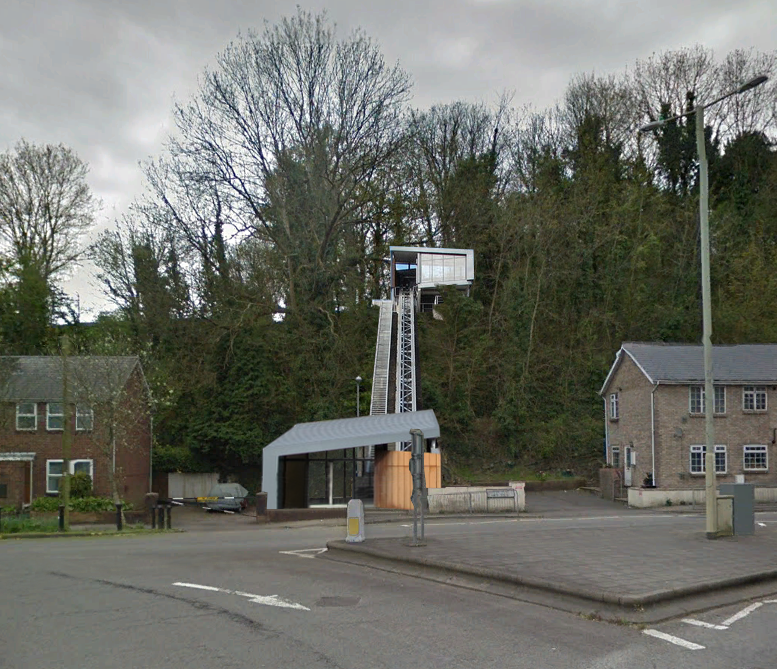 Bridgend Council has announced that the steps linking Tondu Road and Newcastle Hill are to be replaced with a short funicular railway/incline lift.

The project will cost at least £1.5million, generating an estimated £10,000 for the local economy over the next 20 years. It’ll also be the final EU-funded project in Bridgend before Brexit, with additional funding from the Cardiff City Deal and Welsh Government.

A BCBC spokesperson said, “Funiculars such as these have long been important local landmarks in Aberystwyth and Ebbw Vale.

“This vital piece of infrastructure will connect an important historical conservation area with Bridgend town centre, complementing the riverside walk and boosting the night-time economy.

“By providing a quick and convenient alternative active travel route, the project will make it easier for the public – particularly the disabled – to travel between the Newcastle ward and Bridgend town centre. We hope this announcement will go some way towards addressing concerns residents have had about possible cuts to morning and evening bus services in the area.”

Traders have given the project a cautious welcome, believing it will speed up the delivery of takeaways to homes in Newcastle and Cefn Glas. Taxi drivers were, however, worried that a faster shortcut home after a night out will eat into their fares.

Despite the site being close to St Illtyd’s Church and Newcastle Castle, Cadw has reportedly given their blessing as an interpretation centre – a large stone behind a screen with a bilingual sign saying “This is what the castle is made of” – will be built at the top of the funicular. A knock-off version of the theme tune to Game of Thrones will also play whenever a button is pressed.

The Welsh Government want to use the opening of the funicular to celebrate the 830th anniversary of the castle passing to the future King John. The Welsh Government are understood to be “very excited” at the thought of honouring a long-dead English blueblood.

After mandatory pipe inspections and methane probes, work could start as early as this month and, if all goes to plan, the funicular could open on April 1st 2019.