Skip to content
In addition to the county council, Bridgend will also be re-electing our twenty town and community councils (their role is explained at the end of this post).

This is how things stand before the election: 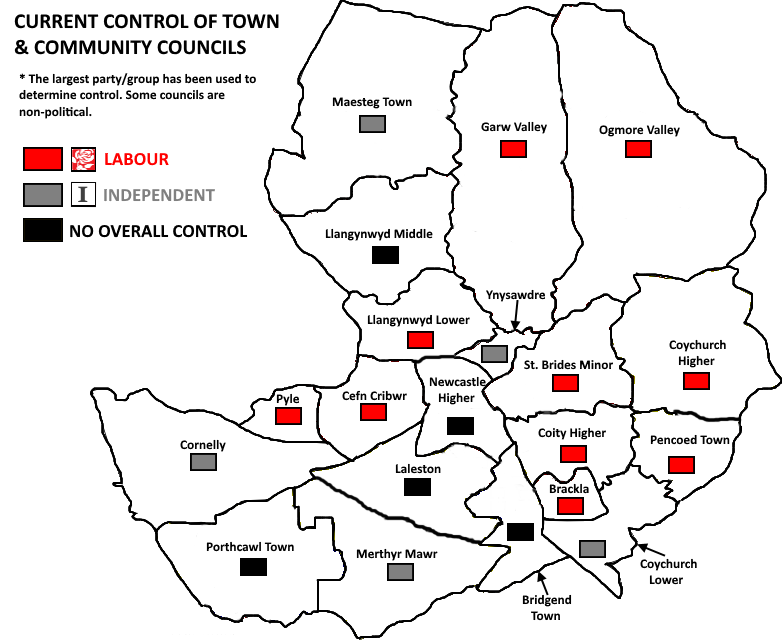 There were ten councils whose political membership I was unsure of, so I contacted the clerks for clarification. Four didn’t respond so I’ve had to use the results of the 2012 election for them.

Bridgend Town Council (BTC) covers the Morfa, Newcastle and Oldcastle wards – effectively the pre-war “old town” of Bridgend itself. It’s currently based at Carnegie House in the centre of Bridgend and was “no overall control” at time of posting this, with Independents the largest group.

BTC made national headlines recently for backing a motion that withdrew the council’s support for town twinning, handing responsibility to a local twinning committee. They’ve also had several run ins with Bridgend County Borough Council over its management of the town centre and has played a big role in establishing Carnegie House as an arts/cultural venue.

Labour and Change for Bridgend are already guaranteed seats in the Newcastle ward (precisely how many depends on how the vote goes).

Maesteg Town Council (MTC) covers the villages of Garth, Caerau and Nantyfyllon alongside Maesteg town itself.

Until 2016 it has always been controlled by Labour, but as a result of a row over candidate selection, and the fallout from the “purge”, a mass resignation from the party saw control pass to Independents.

Even if the redevelopment of the town hall/market will be lead by the borough council, MTC will have a big say so Labour will be desperate to retake control amidst a challenge from the Llynfi Independent group of ex-Labour councillors and other apolitical candidates.

Labour are already guaranteed 4 seats (2 in Maesteg West, 2 in Nantyfyllon). The Llynfi Independents are putting up 12 candidates, while Plaid Cymru are also standing 2 candidates.

PTC was elected completely unopposed in 2012, but this year all three wards will be contested by Labour, Plaid Cymru, Green and Conservative candidates. Labour are guaranteed 3 councillors (2 Hendre, 1 Felindre), while Plaid Cymru will be looking to win a seat/seats in their own right after Tim Thomas’s co-option a few years ago.

Porthcawl Town Council covers Porthcawl itself as well as the attached historic villages of Nottage and Newton.

The Rest Bay and Nottage wards will be uncontested. Taking all the wards together, Porthcawl Independents are already guaranteed 5 seats, the Conservatives 3, Greens 1 and Labour 1. The remaining 9 seats are likely to lean heavily in the Porthcawl Independent’s favour, meaning they stand a good chance of remaining the largest group, if not taking control of the council.

The council’s area of responsibility is the Brackla district of Bridgend town. There are no separate wards, just a single big one. 21 candidates are standing with nobody guaranteed a seat so, like the county borough ward, expect this to be keenly contested.

You would expect both the Conservatives and Independents to make some gains, but I would be surprised if it were enough to block Labour running the council again.

Covers the historic village of Coity, the new village/district of Parc Derwen and the Litchard and Pendre areas of Bridgend. At the moment it’s dominated by Labour.

Covers the whole Garw valley north of Brynmenyn, including the villages of Bettws, Llangeinor, Blaengarw and Pontycymer.

Labour are guaranteed 6 councillors (3 Pontycymer, 2 Blaengarw, 1 Bettws), while Independents are guaranteed 2 councillors (1 Bettws, 1 Blaengarw) – at least one of whom is standing as Change for Bridgend. UKIP are also standing here with a 50:50 chance of getting an elected member for the last seat in Bettws.

Includes the Cefn Glas, Llangewydd, Broadlands and Bryntirion districts of Bridgend as well as Laleston village.

It’s one of the most politically-diverse community councils in the county by having sitting Green and UKIP members – though whether that will continue remains to be seen.

There are three wards, all of which are being contested. Labour are guaranteed 3 seats and the Lib Dems guaranteed 2. There are also candidates standing for Change for Bridgend, Greens, Conservatives and UKIP.

Consists of the Ogmore Valley north of Bryncethin, including Blackmill, Glynogwr, Ogmore Vale, Lewistown/Pantyrawel, Wyndham and Nantymoel. It also include the“enclave” of Evanstown – which is only accessible by driving through Gilfach Goch in Rhondda Cynon Taf (I don’t know if this is a unique situation in Wales or not).

The election won’t be contested. Labour are guaranteed 3 seats and Independents 5, meaning there are a total of 7 vacancies due to not enough people standing. It also means the council will be in (nominal) Independent control.

Consists of the villages of Pyle and Kenfig Hill. It’s traditionally dominated by Labour and they’re already guaranteed 7 councillors, with Independents and Plaid Cymru standing single candidates each.

Covers the villages of Sarn, Bryncoch and Bryncethin.

The Sarn and Bryncethin wards will be uncontested, returning 6 Labour and 2 Change for Bridgend councillors unopposed in total.

Bryncoch will, however, be contested with Labour and Change for Bridgend already guaranteed 2 seats each.

Includes the village of Cefn Cribwr to the east of Kenfig Hill as well as the hamlet of Cefn Cross and the surrounding farmland. The election will be uncontested with all 9 members being Labour, meaning there’s 1 vacancy.

Despite the name it’s nowhere near Coychurch, and consists of Heol-y-Cyw and the surrounding hamlets like Rhiwceiliog. The election won’t be contested. 4 Labour and 2 Independents have been returned, with 1 vacancy.

A community dominated by the Bridgend and Waterton Industrial Estates, but also includes the village of Coychurch itself and will eventually include the area currently being developed as Parc Afon Ewenni.

The council has historically been non-political with all members being Independent, but there’s a Plaid Cymru candidate standing this year alongside 7 Independents.

Covers the village of Coytrahen and the hamlet of Shwt. It’ll be uncontested with 3 Labour and 4 Independent candidates returned unopposed.

Includes the villages of Llangynwyd, Pont Rhyd-y-Cyf and Cwmfelin in the rural area just south of Maesteg.

The Pont Rhyd-y-Cyf ward has 8 candidates for the 7 available seats, with Labour guaranteed 2 seats and both Plaid Cymru and Independents guaranteed 1 seat each.

A predominantly rural community encompassing the area around Island Farm Close and Ewenny Road in the south of Bridgend, as well as the hamlets of Merthyr Mawr, Tythegston and Stormy Down. 7 Independents have been elected unopposed, so the election won’t be contested.

Covers the villages of Penyfai and Aberkenfig. I’ve been told the council is officially non-political but candidates stand on party tickets.

Covers the villages of Brynmenyn and Tondu. It made national headlines recently when police were called to deal with the “top boys” from the YCF ultras. Yes, really.