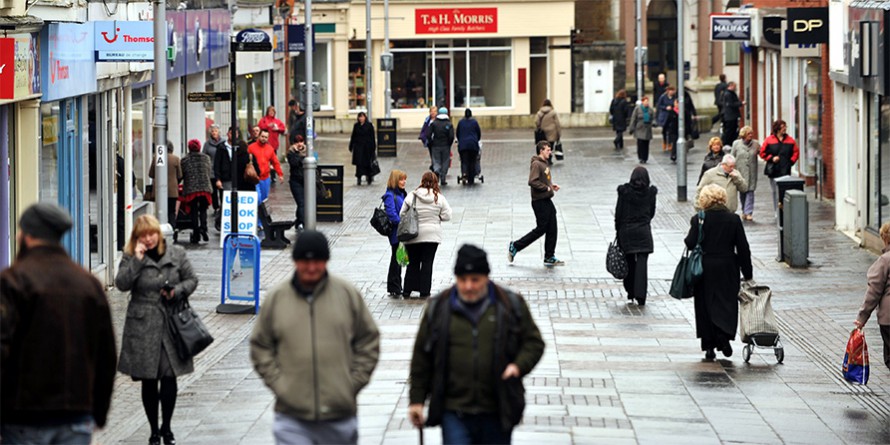 Having looked at county-wide issues previously, it’s time to look at some of the more localised issues, starting with the Bridgend town and Pencoed areas.

Here’s a reminder of who’s standing where.

Relevant Wards: Brackla, Bryntirion Laleston & Merthyr Mawr, Cefn Glas, Coity, Litchard, Llangewydd & Brynhyfred, Morfa, Newcastle, Oldcastle, Pendre, PenyfaiIn line with most town centres, Bridgend has seen a slow decline in footfall/visitors over the last five years (though it supposedly picked up recently) – accompanied by lots of empty shops. Everything from pedestrianisation to landlords have been blamed.

The next five years will be absolutely crucial for the future of the town centre. Any scheme to partly de-pedestrianise some of the streets will need to be funded and signed off for a start. Issues around car parking will need to be addressed and there’s a long-standing desire to attract a major department store to the town centre to claw back trade from the out-of-town retail parks.

I don’t want to be pessimistic, but I don’t think all of that can be done – particularly the department store as most big name high street retailers have seen sales slump over the last few months, while any plans there might’ve been to expand/upgrade the Rhiw Centre are pretty much dead now. There are no obvious answers, so BCBC and town centre traders will have to be creative.

Three of the big issues are: the rents charged by landlords (which are extortionate), business rates and small store sizes. Free car parking might help but I don’t think it’s a cure in its own right as you can still park for free at McArthur Glen for a better selection of stores.

The future of the town centre may well be as a place to live, work and visit – meaning more restaurants, cafes, offices, cultural venues and apartments and fewer shops. The evidence to date (based on the number of restaurants and residential conversions) is that things are shifting slowly in that direction, but what will that mean for current traders?

Most housebuilding in the Bridgend area has been concentrated at Parc Derwen, with future developments at Waterton, Brackla Industrial Estate and a small development near Bryntirion. After that there’ll be questions as to where the next Brackla or Broadlands will come from.

The former Coity Sidings in Morfa/Pendre is the only major brownfield site I can think of that could be developed, meaning greenfield options will be put on the table again. I suspect Penyfai and land north of Bryntirion/Llangewydd will be the next piece of countryside eyed up by developers.

Although nothing’s likely to happen until the next Local Development Plan is finalised (probably in 2019-2020), the process will start during the next council term, so candidates will have to have some idea of what options they would or wouldn’t support now.

The roads in and around Bridgend can be a nightmare during peak times. An accident on Bridgend’s stretch of the M4 seems to happen every couple of weeks (although that’s not the council’s responsibility, the junctions are at least partly), with Junction 36 of the M4 already at or exceeding capacity.

Some other problems include the persistent jaywalking at the crossing between Tescos and Bridgend bus station due to how the lights and crossing are laid out. Litchard Cross can be a bit of a nightmare for pedestrians as well and is only likely to get busier as Parc Derwen nears completion.

There’s been a lot of attention focused on the A48 bypass too. As mentioned beforethere’ve been a number of fatal accidents on this stretch of road in recent times and there is/was a campaign to reduce the speed limit and/or provide proper pedestrian crossing facilities at the bottom of Newbridge Fields.

In Pencoed, the level crossing and inadequate Penprysg Road bridge have caused problems for as long as I can remember. The bridge may need to be replaced when electrification work starts on the railway, but as that keeps getting pushed back it’s unclear when, or even if, anything will happen in the near future.

One way to deal with traffic problems is to improve public transport – perhaps including increasing the number of trains that stop at Pencoed. There are plans for a bus and taxi lane to link Brackla Street to Bridgend railway station (to enable people to change between different forms of transport more easily) but it’s another story of delays and legal wrangling over land ownership involving Network Rail.

4. Future of local services in Pencoed

Of the four “main” towns in the county, Pencoed is probably the most peripheral. It’s too big to be completely ignored but, as it’s not the focus of major housing developments like the Sarn/Tondu area, it’s unclear whether local services could be maintained in the long run because of the fixed, relatively small, catchment area.

As mentioned it’s obvious the level crossing acts as as a barrier to development – and maybe this is a good thing if you want greenfield land protected. However, if Pencoed wants to attract a major supermarket and retain some spending money from Bridgend and Talbot Green (Tesco have been sniffing around there for a while now) it needs the catchment area.

This will inevitably impact public services too. Pencoed now has a modern primary care centre, but with libraries and leisure services likely to be in the line for further cuts over the coming five years, user numbers will have to be maintained at the swimming pool and library to stave off any threat to them (personally I don’t think there’ll be much of a problem there).

Bridgend and Pencoed host the bulk of the business/industrial premises and land in the county.

Obviously the big question here is over the medium-term future of the Ford engine plant. The incoming BCBC administration will need to prepare for the worst, but hope for the best. In terms of the former that means being prepared to step in and help the workforce if the plant sheds staff, particularly when it comes to retaining their skills.

Although the (combined) Bridgend and Pencoed area is still a major manufacturing base in both Welsh and UK terms, there’s still a need to attract new industries. We’re fortunate Bridgend and Pencoed already host some  technology and IT companies like CGI and have an important base at the Sony Pencoed Innovation Centre – but what about the future? Should Bridgend look to have a robotics factory or do something significant with the expansion of Bridgend Science Park – like a university/college tie-in?

The Wildmill estate – which lies within the Morfa ward – still ranks poorly on national measures of deprivation. Although it once had/still has a bit of a “reputation”, the problems aren’t quite as bad as they used to be, but still far more prevalent than most parts of the county – drug abuse, high levels of unemployment and economic inactivity, anti-social behaviour.

The housing is clearly becoming dated and you doubt whether many of them will last the next 20-30 years. I’m sure they’re all sound but some of them look like they’re slowly rotting from the outside. Valleys2Coast housing association have promised major regeneration works before (pdf), but none of those plans have come about and it’s been scaled back to the point of relatively minor external refurbishments and demolition of garages.

In an ideal world where money wasn’t an issue, Wildmill would be cleared and completely rebuilt with homes front-facing streets, fewer lanes/footpaths/steps, better quality open space and modern community facilities.

The problem of regenerating Wildmill is made more difficult by the fact some people have bought their homes under right-to-buy, so it’s not as if they can be demolished and rebuilt whole scale without buying people out at great expense.