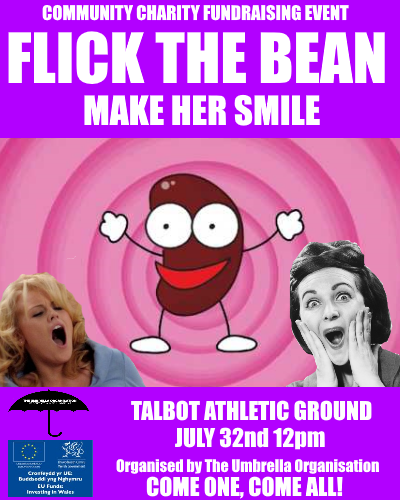 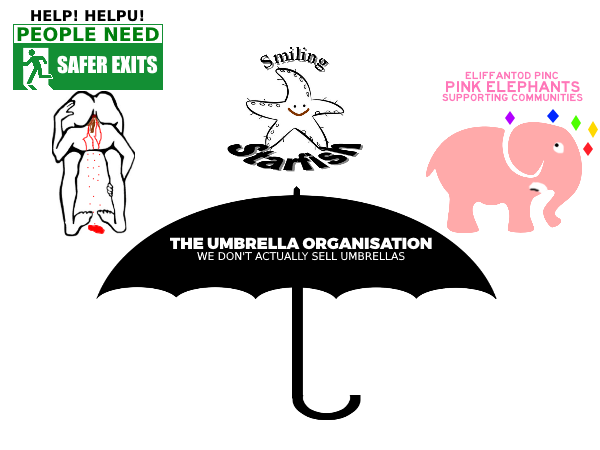 This is the story of the collapse of three of Wales’ leading Third Sector organisations.

In the autumn of 2015, Smiling Starfish, Safer Exits and Pink Elephants (formerly the Foundation for Romanticist Pseudo-science) merged under the umbrella organisation The Umbrella Organisation.

The Umbrella Organisation expanded quickly thanks to EU and Welsh Government funding earmarked towards meeting key policy objectives. These objectives included redirecting funds away from front line support services to pay for administrators and managers, as well as building a suspiciously large property portfolio.

A whistle blower formerly employed by Safer Exits said, “We used to support people who’d suffered the pink sock, but suddenly we were expected to run social services and employment schemes on the cheap.

“Surely the government, council and further education colleges should be running them, not Beryl the retired dinner lady.”

The merger caused instability as The Umbrella Organisation struggled to figure out what its purpose was. Is it a business? Part of the public sector? Is its mission statement too vague? Are the problems too big for them to deal with alone? Are some of their ideas really stupid?

“The director of Pink Elephants was determined to start an all-woman colony on Venus after the Neptune failure,” said the whistle blower. “She didn’t go quietly. She kept lecturing us about how Wales needed her Reiki expertise and jewellery making skills more than she needed tens of thousands of pounds of Welsh Government and EU cash.

“She’s living out of a camper van near the border telling us she’s ‘definitely going’, ‘you’ll never see me again’. Yes, she’s still getting public money. Yes, there are still people out there ready to defend this.”

The straw that broke the camel’s back was a charity event held at Aberavon Wizards’ Talbot Athletic Ground in the summer of 2016.

“Flick the Bean” involved participants getting down and flicking a broad bean from one end of the rugby pitch to the other and back again to raise money for an important woman’s cause.

Men were invited to take part too, but struggled either to find the bean and/or use the required light touch and dexterity, leading a frustrated organiser to disqualify them en-mass shouting, “Forget it!” through a loudhailer.

So in the end-of-July howling gale and torrential downpour, the remaining tens of women from around the community struggling through slippery conditions on the uncut grass to flick their beans.

“I practised for months,”one contestant told us. “Up and down the seafront every day in a class funded by Umbrella. It still took me two hours flicking it, but I was digging up more mud than bean.”

Little did the participants realise the cause they were raising money for was a handbag upgrade and stress-relieving holiday for the treasurer, whose actions resulted in the Welsh Government pulling the plug in embarrassment, causing the organisation to fold.

“We were exhausted but strangely ecstatic at the end,” the participant said. “These were magic beans. It brought us all together. We thought this would be something our daughters would continue to do in the future.

“We also thought that if someone’s working for a charity, or making charity donations or doing charity work, that makes them a good person. Who would’ve foreseen that if you turn ‘charities’ mostly funded by public money into businesses, they might adopt corrupt business practices?

“The sense of betrayal is enormous, but I got forearms like Popeye out of it. It makes signing-on easier and at least The Umbrella Organisation taught me how to make jewellery to fit.”

Having reviewed the charity’s finances, Fellow in Stating the Obvious at the Institute of Studies, Prof. Ophelia Rass explained, “This is what happens when lines between public, private and charity sector become blurred. An organisation like this needs the books of a business, the service standards of the public sector and heart of a charity.

“We end up with the worst of all worlds: the soft-headedness of a charity, the books and political interference of the public sector, alongside the greed and social darwinism of a business.

“While incomes fell, they were busy flicking beans, feeling self-satisfied and over-confident that the good times will continue. They believed the Welsh Government will keep pumping money into it to avoid one of their flagship national schemes being shown up for what it is, when for a long time they knew in Cardiff that it wasn’t doing anything significant to meet the goals laid down for it.

“Here’s a hint: Spending £812,000 on staff to decide how to spend the £111,000 generously retained for the local community isn’t going to tackle poverty for anyone except themselves. Wages should be – at most – 40% of turnover. 88% is a sign you’re about to go under.

“Here’s another hint: When you need to lay people off but still need to provide services, start with those higher paid, well-connected people at the top then work your way down. Credit people’s intelligence. A front line workforce of 20 doesn’t need 12 managers and administrators to supervise them.

“This message doesn’t seem to be getting through in Wales.”