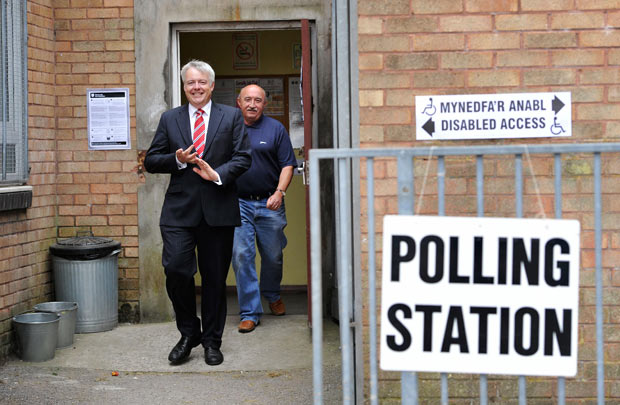 With polling day just around the corner, it’s worth turning attentions to local constituencies. There’s little point in repeating what I said last year in terms of constituency profiles (Bridgend, Ogmore), so I’ll concentrate on the politics.

Myself and Andy Chyba will have unique perspectives on the blogosphere by being the First Minister’s constituents – and Andy’s since offered his own observations on the elections in Bridgend.As a constituency AM it’s hard to judge how well Carwyn performs because his national role takes public precedence – though considering he’s had a cabinet role of some sort since first elected I’d say we’re used to it. He doesn’t neglect constituency duties, and I’d like to think most people in Bridgend realise he’ll have more on his plate than other AMs. I wouldn’t say we’re any better or worse off because of that.His record as First Minister will be his weakness due to serious local problems like high youth unemployment, future hospital reorganisations and care scandals at the Princess of Wales Hospital – where he hasn’t been able to get as hands on as others for obvious reasons. There are also more localised issues like the decline of Bridgend town centre and problems relating to Porthcawl regeneration. If he wasn’t both First Minister and a“local boy done good” he would be in trouble.

In addition, regional AMs – who are the only avenue for opposition in Bridgend – have sometimes appeared too afraid to do much here. I suspect it’s because when they do it gives Carwyn an opportunity to cut them to size in the Assembly chamber using his own local knowledge, aided by a compliant local authority; Bridgend Council leader, Mel Nott, comes across as Carwyn’s guard dog in the Glamorgan Gazette.

Regardless of the result, Carwyn’s future will be a topic of discussion in the coming years. If re-elected (heh) he’ll be favourite to run as MP for Bridgend’s successor seat in 2020 (should Madeline Moon stand down). That in turn would mean standing down as Welsh Labour leader and First Minister.

It’s a rumour that’s been bubbling for a while now and if the 2018 boundary review boosts Tory chances, Labour will want to put forward a big name to retain it as (based on 2015’s results) Bridgend’s now a key marginal seat. I don’t think it’s beyond the realms of possibility that Carwyn will be eyed up by Labour wonks for a Whitehall office either as he’s still relatively young for a senior politician.

From my perspective the Conservatives have been the most active party in this campaign. I’m sure we all got the letter “from David Cameron” warning us about Jeremy Corbyn, while their leaflets have been arguably the best ones put through the door. They’re closely followed by Labour – the only party to have sent round canvassers to my part of Bridgend. The other parties have barely run a campaign at all, though the Lib Dems have sent out quite a few leaflets and letters begging us to stop UKIP. UKIP have been surprisingly quiet.

On the garden sign and poster count it’s a landslide in Carwyn’s favour but they’re few and far between and seem to be outside councillor’s houses in the main. Also, I’m not sure it was a good idea to plaster the former Mayhem Menswear shop on Dunraven Place (opposite HSBC) with Carwyn posters as there’s….something ironically symbolic….about an empty shop in a struggling town centre covered in posters of the Labour candidate in a Labour-run local authority.

These are the sort of seats the Conservatives need to win to take a serious stab at forming a government, but trying to unseat the First Minister is going to be bloody hard going for anycandidate. To his credit, George Jabbour has at least attempted to turn this into a contest and has really thrown himself into this – being given a seal of approval by the Prime Minister a few weeks ago and attracting campaign support from other big-hitters. I don’t think he’ll win but I would say he’s someone to keep an eye on for the future….if he stays in Wales. Expect him to be parachuted into the first available safe seat.

Caroline Jones is standing again for UKIP and did reasonably well in the Westminster election last year, coming third with 15% of the vote – UKIP’s best ever result in Bridgend. I’m fully expecting them to repeat, if not improve upon, that performance and they do have a modest local branch. Regardless of how she does in Bridgend it’s highly-likely she’s going to be elected as an AM – but via the South Wales West regional list.

For Plaid Cymru, Bridgend’s gone from being an area of potential growth in 1999 (where they got 20% of the vote) to their weakest constituency west of Cardiff – underlined by their inactivity here. That’s not a complaint as I (sadly) wouldn’t expect them to put much effort into Bridgend anyway as Ogmore’s more fruitful. It could hurt them on the lists if they lose electors who vote for the same party twice.

As said yesterday it’s supposedly very close between Plaid, Tories and UKIP for a second list seat and it’ll probably be decided in Bridgend. Even a slight drop of a few hundred regional votes could change the result. Plaid’s increased vote in 2015 seemed to happen by accident; 8-10% or a close push for third place would be a decent enough outcome.

It’s looking like a retain the deposit job for the (once fairly influential) Bridgend branch of the Lib Dems. Like their Assembly counterparts, it seems Lib Dem councillors make reasoned contributions in the Bridgend Council chamber, but that’s not going to count for much. Their only hope is having a good regional campaign because losing Peter Black is going to be a blow.

Thanks in main to the previous work of the aforementioned Andy Chyba, the Greens have/had a modest presence in Bridgend, though nothing compared to the university constituencies and seems to have weakened quite dramatically in a short space of time – including the loss of Andy himself. It’s a retain the deposit job, but a good result might give them an idea of which wards to target in next year’s local elections.

To conclude, it would take a brave person to bet against Carwyn Jones retaining his seat. However, even under those massively unlikely circumstances only the Conservatives could realistically take it from him – probably the result of a big jump from Labour to UKIP. That’s a very distant, but plausible, scenario as Bridgend has been slowly drifting from Labour.

I should stress that this is for the Assembly seat, not the Westminster by-election. For that read Ogmore By-Election Runners & Riders.They’ll be weighing the Labour vote not counting it. I’ll “go out on a limb” and make a bold prediction that Huw Irranca-Davies will be swapping Westminster for Cardiff Bay on Friday. The interesting questions here are who comes second and by what margin? In Assembly elections Plaid Cymru hold their own, though their share of the vote has fallen from 27% in 1999 to 17% in 2011. Despite this, they’ve finished second in every Assembly election to date and stand a chance of doing so again this time around. The Llynfi Valley has traditionally been a reliable vote for Plaid and also contains the highest concentration of Welsh-speakers in Bridgend county. Their problem is that they’ve often struggled to get many votes outside that area. Plaid don’t have the manpower to take on Labour as they’re spread pretty thinly across Bridgend county as it is, with Plaid’s membership in the region heavily-concentrated in Neath Port Talbot. The Conservatives have been on an upward trajectory in Ogmore over previous Assembly elections; they barely retained their deposit in 1999, but in 2011 got 14.5% of the vote. Meanwhile, areas like Pencoed, Llanharan and the Bryncethin/Tondu area are becoming suburbanised with executive homes targeted at Cardiff commuters. If they take another step up this time they might be able to nick second place – I doubt they’ll have enough in the tank, but a similar result to 2011 is a reasonable expectation.

Then there’s UKIP. They’ve changed their candidate to (AFAIK) Bridgend’s only UKIP councillor, Hazel Kendall. They did relatively well in Ogmore in last year’s Westminster election, coming close to second place. Whether they’ll do that this time around remains to be seen. Ogmore is supposedly a seat with key UKIP-voting characteristics, but I’m not convinced the local branch is strong enough to make anything of it.

The Lib Demsselected Cllr. Anita Davies, who stood in Bridgend last May and lost her deposit. Anita does a lot of charity work and is a school governor, but she’s unlikely to make much of an impact. Sadly, it’s looking like another race to retain a deposit, but I expect her to do better than last year as the list of candidates isn’t as crowded. Ditto the Greens.