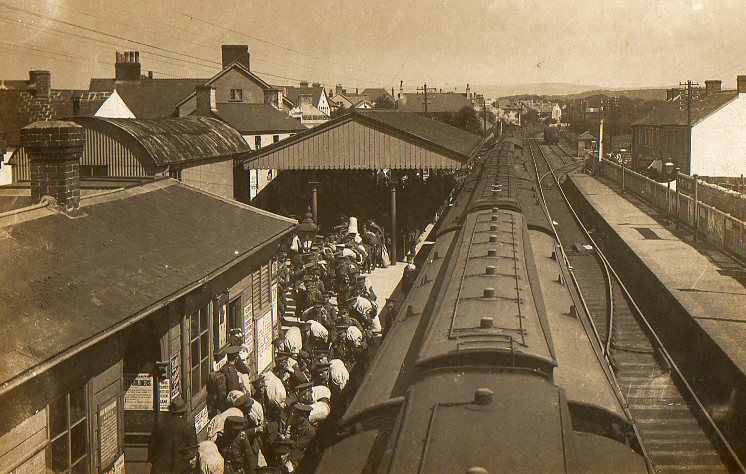 Tourist season is coming, and thousands of people from near and far will soon begin descending on the south Wales coast to take advantage of any sunny days we’ll have. In Porthcawl’s case it’s almost certain most of them will arrive by car.

Porthcawl remains one of the largest towns in Wales without a rail connection. Blackwood in Caerphilly county would probably be the winner, while there are plenty of others to mention like Mold, Caernarfon, Llangefni, Abertillery, Pontardawe, Cardigan and Monmouth.

Plans to re-establish rail links to Llangefni, Caernarfon and Abertillery are at various stages of development or have at least been discussed formally, ditto the potential re-opening of the Carmarthen-Aberystwyth line (Making tracks in west Wales). Mold would be relatively easy to do as well.

When it comes to Porthcawl, however, while re-establishing a rail link has been mentioned on-off since the branch line closed in 1965, there’s never been any serious attempt at getting it off the ground. That’s not surprising as most of the former branch line has disappeared under the M4, Grove Golf Club, the South Cornelly bypass and the A4106 dual carriageway in Porthcawl itself.

The reason why I’m doing this now is because Porthcawl is included as part of the Metro project in south Wales, with the map showing a fixed connection between Bridgend and the town.

That doesn’t necessarily mean there’ll be a rail link; I think the most likely outcome will be a bus rapid transit route to and from Bridgend and on to Cardiff (via the A48) as an enhanced X1 service.

A word of warning : I’m no engineer so most of this is back of a fag packet stuff and there could be nasty surprises I hadn’t considered. Also, this has to be read on the assumption there there was an unlimited pot of money which meant a fixed rail connection could be put forward as a serious option….

Where to connect? – AFAIK the old branch junction faced Swansea. I’d imagine this time most passengers from Porthcawl would want to go to Cardiff or Bridgend. Of course there’s no reason why you couldn’t do both somehow.

Service patterns – The south Wales mainline is already overcrowded so trying to fit in a Porthcawl service would be tricky, particularly between Bridgend and Cardiff. Any journey between Bridgend and Porthcawl would probably take 7 or 8 minutes. Would it be a shuttle between the two towns? Or a redirection of an existing service?

Potential passenger numbers – I’m under no doubt that a Porthcawl station would be well-used from the start by locals alone. There’s a definite tourist market and you sometimes hear people ask at Bridgend station if there’s a rail service to Porthcawl – imagine their disappointment when they’re told to trudge down Station Hill to get a bus or a very expensive taxi journey.

How much are locals willing to sacrifice? – Some of the potential route options could cause ructions in Porthcawl and further afield. For example, if you wanted to build a station as close as possible to the old one, Porthcawl would probably have to sacrifice the northbound carriageway of the A4106 and reduce it to single carriageway. There would be demolitions and CPOs galore as well as the prospect of a rail line crossing through environmentally-sensitive sites.

Construction costs – As many of the possible options involve completely new alignments, the cost of building would be significantly more than simply reopening a disused line. I’m going to base the costings on the Borders railway in Scotland, which was built for about £5.2million per km. When you add a standard 15% contingency to that, it rises to £6million per km. 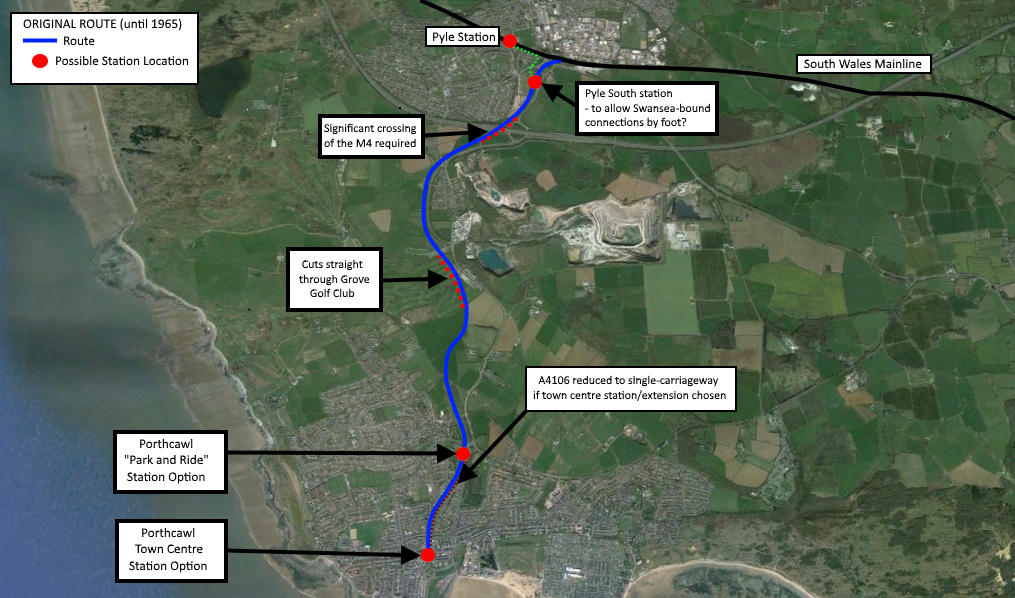 Option 2: A new route via Stormy Down 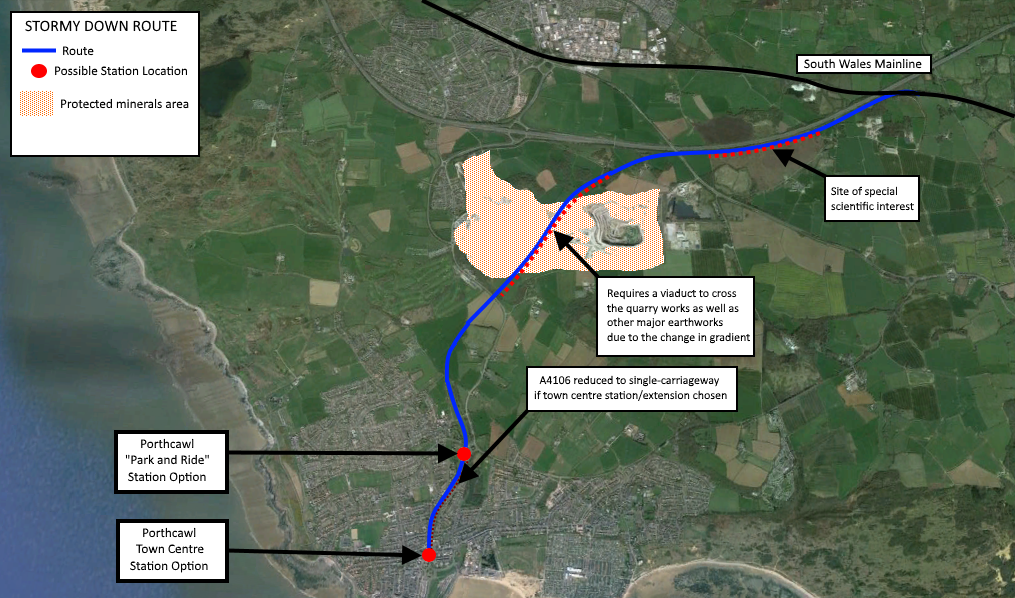 Option 3: Eastern approach via the Vale of Glamorgan Line

Which option would be best?

Probably a new route via Stormy Down. It’s the least contentious in terms of what it crosses – apart from a difficult to reach SSSI and the South Cornelly quarries – would probably offer the fastest journey time and would probably be the easiest to build in the shortest timescale.

In terms of broader considerations – like the potential of creating an additional diversionary route between Port Talbot and Bridgend – then a line from Island Farm to the north of Porthcawl would be better.

Either way, it’s not going to happen as a bus rapid transit route would be easier to build and less controversial. Nevertheless it can’t hurt to put a few more options on the table.