As the 2016 Six Nations draws to a close, rugby experts have been trying to determine whether the innovative new balls used during the tournament by the Welsh team have been a success.

Head of Rugbytech Development & Performance – former Wales legend, Jay J.J. Jaye – said, “It’s clear these new balls have brought some much-needed excitement and have gone down well with supporters. “They confuse the opposition and force more entertaining errors. As they hear screaming getting louder and louder they’ll be looking around trying to determine where it’s coming from. Before they realise it, they’ve got a shitty nappy bearing down on them in addition to George North.

“It’s all part of the ongoing efforts we’re making to improve the atmosphere, while we’re also ensuring kids get involved in the magic of rugby from a young age.”

Those measures include changing the pre-game songs. After well-publicised concerns, the WRU changed the male voice choir songsheets to Misfits’ Last Caress. It won’t be the first or last time in rugby that an up-beat, easy-to-sing-along-while-drunk tune has been cognitively dissociated from the lyrics.

Not everyone was happy with the new balls, and the often trotted-out phase – “Won’t somebody think of the children” – had a bit more oomph behind it this time. Social workers throughout the country were horrified, but accept that an indifferent attitude to systemic child abuse within a high-profile public organisation is something to be expected nowadays.

Jay J.J. Jaye took on board concerns that the new playing system was “a little abuse-y“, but explained that it emphasised the sport’s focus on blood, pain, sacrifice, anguish and death.

“If Diego Costa were a little Romanian girl, he would win gold at Olympic gymnastics,” Jay told us. “Rugby is a proper man’s game played by manly men who like massive tackles and the feel of big hot balls in their hands.” 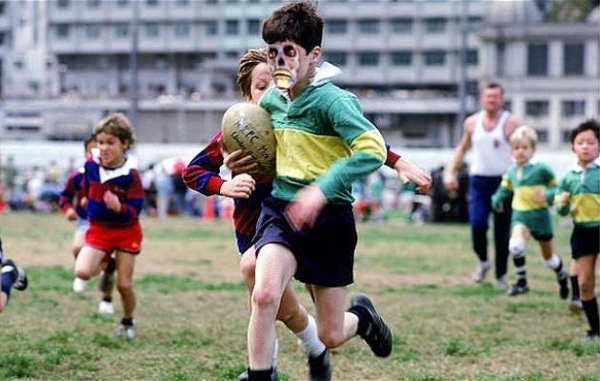 The new balls were first trialled by the WRU in 2008, and one of the first balls has since gone on to play rugby themselves (pictured above).

Their father – who agreed to the trial, and scoffed at recent suggestions that full tackling be banned for juveniles whose skeletons haven’t fully developed yet – told me, “You don’t understand the thrill you get. The thrill of seeing your own two month old child getting their face ground off on the turf – in slow motion – to Eddie Butler quoting Shakespeare. Proudest day of my life.

“It’s true about the whole ‘learning to chew again’ thing and he can’t eat anything with too much salt in it – he once downed a packed of salt and vinegar Squares and had to go to hospital because of the open face wound.

“He also gets funny looks from the other kids as he can only communicate through a series of carefully-pitched grunts and eye twitches. But the most important thing of all is that they fear him. They fear him and his scabby little face.

“So volunteering your child to be a rugby ball not only toughens them up, it builds character.”

Back at the Principality BS Stadium, I mingled amongst the crowds to see what they thought. I found another beaming father, who’d just conscripted his child to the pitch, “I was trying to drink a warm beer and eat an over-priced burger at the same time. I brought my newborn to see the spectacle, but he wouldn’t shut up. He needed to man up, so I spin-passed him onto the pitch over the sparkly pink cowboy and daffodil hats.”

“It was making a bit of a racket, and wouldn’t shut up. It just kept getting louder,” another inebriated middle-aged spectator shouted over my shoulder, “But we got a penalty, and as soon as boot made contact with spine it sailed through the posts, bouncing nicely before hitting the advertising boards. Then it shut up. A true Prince of Wales. Builds character, it does.”

“….Oi!….Did you just call my son ‘it’?”“Yes”, he said, raising a plastic pint glass. “It died well….Skål!”Ahead of the Assembly election, the Serious Business Party said they wholeheartedly support the innovation, saying it turned “abortion into abort-fun“. They also support for the reintroduction of Roman gladiatorial combat to the school curriculum. A spokeschimp added, “We’ve gone soft ever since Boudica’s uprising. PC gone mad.”

All this was in addition to an election pledge to bring back Group B rally – a campaign recently launched in the Brechfa forest with a stunt involving a drifting hearse – but party members decided it was too extreme even for them.