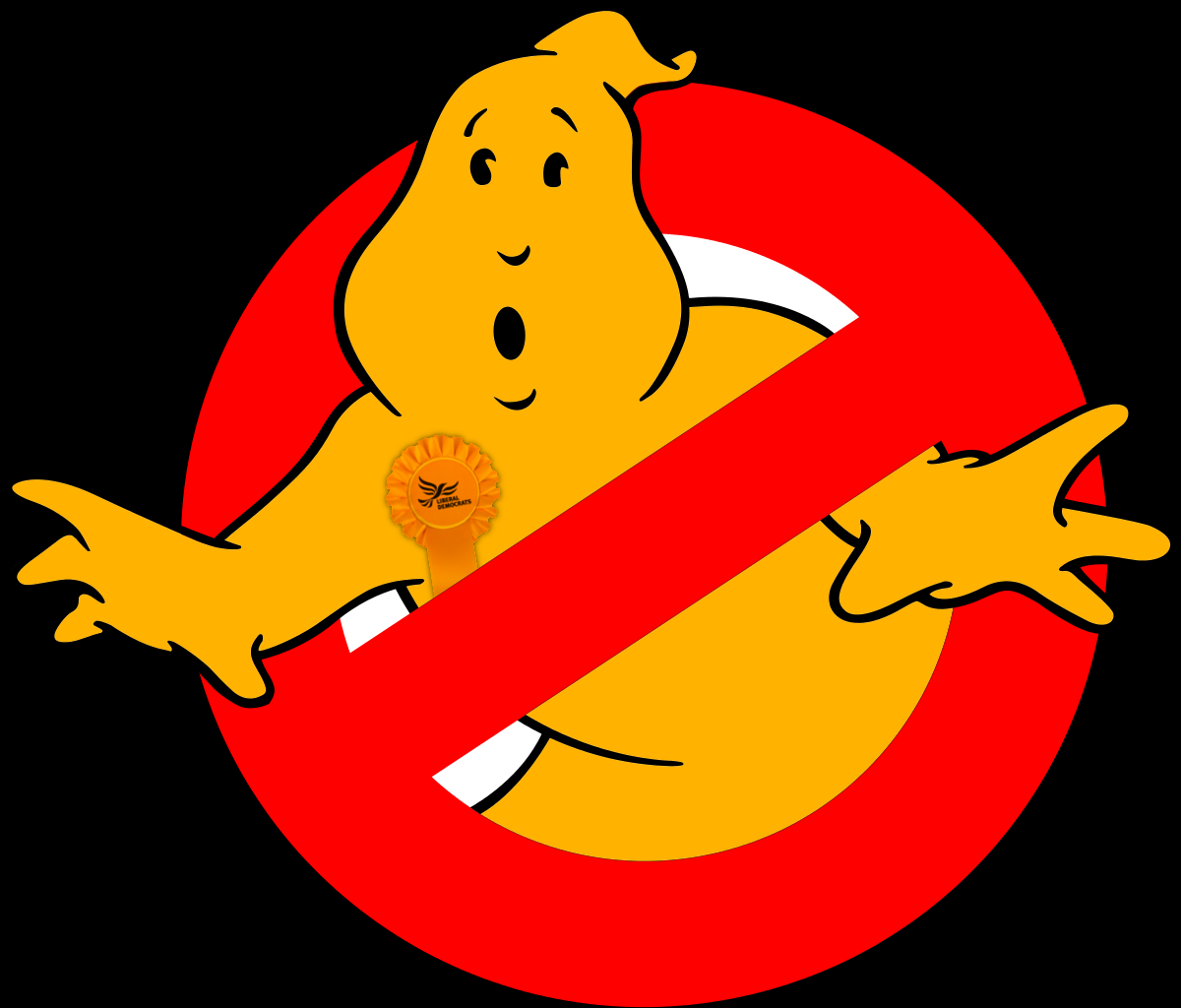 A half-dozen studious and marginalised political researchers, masquarading as politicians in Cardiff Bay, are undertaking an experiment. The lead academic holds up a card to the test subject – a first year student.
“I want you to concentrate and tell me what’s on the other side of this card”, he asks the test subject. “Lib Dems in….”“….crisis?”

“Good guess, but no”. An electric shock is administered. “The answer was ‘government’. Try the next one. What do you see?”

“….a square.” Another electric shock.

“It was a bar chart. Only the Lib Dems can win here….in Monmouth.”

“I’m getting a little tired of this!”

“You volunteered, didn’t you? Aren’t we paying you? We’re studying the effects of Pavlovian conditioning on political campaigns.”

“Yeah, but I didn’t know you were going to give me electric shocks!” The student storms out, “Keep the pupil deprivation grant!”

A fellow academic storms in, interrupting the work, “At 1:40 this afternoon in a public library, ten people witnessed a free-roaming, vaporous, full-torso apparition.”

“No, this one’s for real. Ghosts from our past are coming back to haunt us.”

The team rush to the scene, cautiously moving down a dark aisle in the economics and business section of the library. A book analysing the under-valued Royal Mail sell-off of 2014 flies across the room, startling everyone. As they come around a corner, they notice an ethereal presence hovering in mid-air browsing commentaries on Adam Smith.

“What do we do now?” asks one member of the team.

“I have a plan.” They edge closer to the ghost, carrying a large sheet to cover it up, “GET HIM!”

The spectre looms up in a great screaming demon, as the team run out of the building and into the street.

“We were right!” says one of the more excitable team members after they had an opportunity to calm down. “If the ionisation rate is constant for all ectoplasmic entities, I think we could really punch above our weight – in a spiritual sense.”

“You’re suggesting we can catch ghosts and people will vote for us again? If we actually trap one, we’ll win a Nobel Prize for sure.”

Basing themselves in an abandoned fire station, their business lives starting with a TV ad.

“Are you troubled by strange people knocking on the door? Are they ginger? Do you experience feelings of dread when you see a diamond sign or bar graph? If the answer to any of these is ‘yes’, then don’t wait another minute. Just pick up the phone and call the professionals – Ghostbusters.

“We’re ready to believe you!”

Business was slow to start with, but at a nearby hotel, guests were complaining about a stench emanating from the function room. It was set aside for a wedding reception, and the management were concerned that the food was spoilt. But then guests started complaining of a strange presence….

“Ghostbusters….” The manager was unenthusiastic when answering the call. “Yes, it is. Yes, of course we’re serious, we were in government.” She suddenly gets excited, “You do? You have? Well, uh, just give me the address. Oh, they’ll be totally discreet.”She puts the receiver down, “WE GOT ONE!”

As soon as the team arrive, they’re approached by the hotel manager, “Thanks for getting here quickly.”“Has this ever happened before?”

“It’s been quiet for years, up until the Lib Dems were booted out of government. It’s never been this bad. It’s as though the dead are coming back to life. I hope we can take care of this….quietly.”

The team enter the function room, and see an apparition flying around the chandelier leaving yellow slime everywhere. The buffet, enough to feed 100 people, had been devoured by the creature. What little food remained produced a stomach-churning smell that left guests gagging and dry heaving.

“There! At the ceiling!” One of the team prepares their proton accelerator gun.

“Wait, there’s something I need to tell you!” said the team member who designed the weapons. “Don’t cross the streams – like the Orange Book people.”

“Try to imagine all life as you know it stopping instantaneously and finding yourself confined forever in another dimension where Tories govern alone, unshackled by a liberal leash.”

They fire their weapons as the spectre bobs and weaves away from the light beams. They manage to guide it out of the centre of the room, where a metal coffin-shaped box is slid out under the beast. The box opens and the creature is sucked down into it within a bright column of light.“We got it!” one team member says as they exit the function room’s double doors, holding the smoking trap aloft.

“What was it?” asks the manager.

“Alright,” the manager reluctantly relents, “….anything. Just take it away, it’s stinking up the place.” 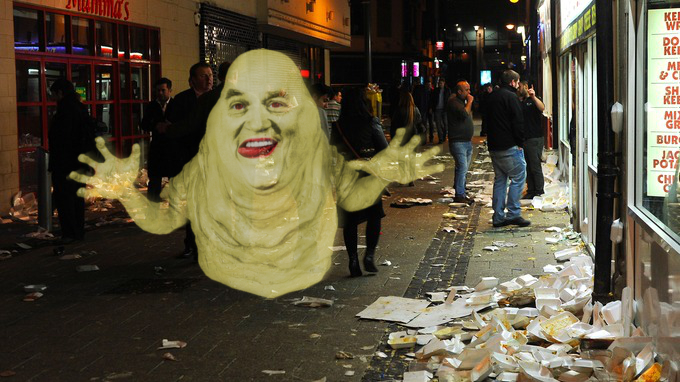 The Ghostbusters’ reputation grew and it wasn’t long until they were inundated with calls about belligerent spectres carrying diamond-shaped signs and declaring they were “fighting back”. This also meant they hadn’t escaped the attention of the authorities, and their unlicensed containment machine prompted a visit from Natural Resources Wales.Inside the storage machine is a bleak repository for lost souls and lost deposits. Strange lights, mists and spectral shapes waft about aimlessly. Human-like figures lean against the walls in despairing convict poses. It is a sad and frightening limbo and a most unholy makeshift asylum.

“Step aside,” the environmental health officer tells the team as he descends into the basement accompanied by police, “or I’ll have you arrested.” They point to the storage facility, “I want to see what’s in there. Now you either shut it off, or we’ll shut it off for you.”

“If you turn that thing off, we won’t be responsible for the consequences.”

“On the contrary,” the officer said, “you’ll be held completely responsible.” They turn to an electrician, “Turn it off.”

One of the team mimes an explosion with his hands as they quietly sneak away. As the containment unit shuts down the building shakes, while a geyser of paranormal energy shoots into the sky, bringing darkness and frightening the populace.

Everything was fine until their unit was shut down by a sanctimonious, dickless wonder.

With the city terrorised, and the threat of both cats and dogs living together as well as mass hysteria looming over everyone, charges against the team were waived and they set to work. The negative energy was concentrated at a single building. The Ghostbusters reach the top of multiple flights of stairs, exhausted. The top floors have been blown to pieces in order to open gates to the Spirit Domain of Lost Deposits, protected by a demon taken humanoid form.

“Good evening!” a team member says, approaching cautiously, “As a duly elected representative of the state, I order you to cease any supernatural activity and return forthwith to your place of origin or the nearest convenient parallel dimension where the Lib Dems are still an electoral force.”

The demon gives a blank expression, “Are you a God?”

The demon forces the team to fly across the ground, enveloped in yellow lightening.

“Subcreatures!” the demon shouts. “The traveller has come! Choose or perish! Choose the form of the destructor!”

“Empty your heads,” a team member orders, “Don’t think of anything. We’ve only got one shot at this!”

“The choice is made!” the demon announces with relish. “The traveller has come!”

“Woah, woah, woah! Nobody chose anything!”

A team member quietly slinks away, “I couldn’t help it. It just popped in there.”

“What? What just popped in there?”

“I’m crawling through a desert having just cut my scrotum off, tanning it in the traditional manner using dog shit and fresh piss etc. Then, I stretch my leathery ball sack across a pothole so Christina Hendricks can drive over it – Natalie Dormer riding shotgun – without feeling a thing, like a hairy cattle grid.

The colour drains from the rest of the team’s face, “Really?”

“What did you think of then?”

A giant Nick Clegg sends onlookers running in fear. He stomps through a gentrified and hilariously over-priced student village, crushing dreams with every step. No ifs, no buts.“I have an idea,” says the brains of the group. “We’ll cross the streams.”

They each take turns in targeting Nick Clegg, even though it was the release of thousands of smaller ghosts which caused all the problems in the first place. The team fight with every last fibre of their being to destroy the monster of their own creation, and eventually they succeed. The giant disappears in a puff of smoke as if he never existed.They expect to take the plaudits of the admiring crowd having slain the beast and granted the city its liberal freedoms back. Instead, they found themselves doing circuits of children’s birthday parties in community centres, double booked with community councils.

“♫ When there’s something strange, in the neighbourhood, who you gonna call? ♫”