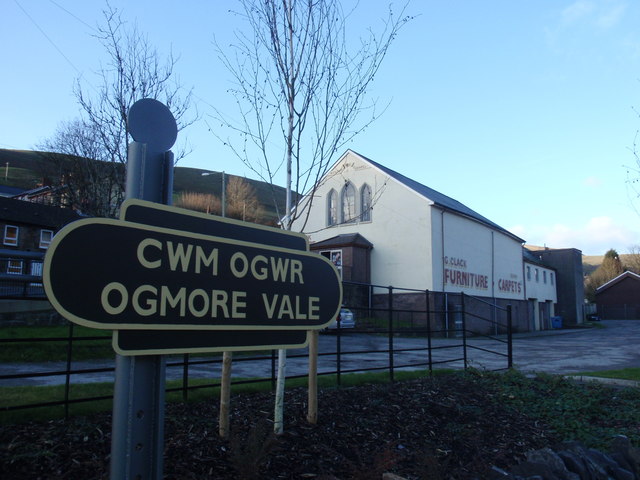 Residents in the Ogmore Vale ward went to the polls to elect a new Bridgend county councillor yesterday following the resignation of Independent Della Hughes back in September (Firefighters Sacked, By-Election Update & Pedestrianisation). Five candidates put their names forward, and here’s the result: 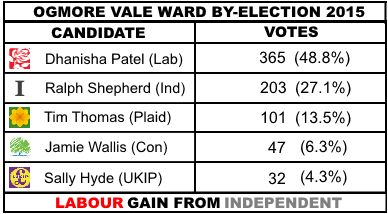 You can’t read too much into the result in terms of the 2016 Assembly election, but considering two of the people running in the ward are standing next year, you can takesomething from it.First of all, congratulations go to Dhanisha Patel for what was, in the end, a pretty convincing victory. Labour couldn’t have picked a better candidate – her family are well-known as they run a local store, and she’s the only candidate who lives in the ward. Her victory also means Bridgend Council has, by local government standards, a reasonably high number of councillors under the age of 35 and an above average number of women councillors (30%).

In terms of voting percentage, it’s about what you would expect for Labour in the area – perhaps even a bit higher.

This was a gain from the Independents, and it’s not surprising that Ralph Shepherd – as the only other candidate who lives in the Ogmore Valley – finished second. I would’ve expected the result to have been a bit closer.

It’s a decent enough showing for Plaid without being spectacular. Tim Thomas has clearly spent a lot of time in Ogmore Vale over the last few weeks and nobody can accuse him of not putting in the groundwork. That’ll do his profile ahead of next year’s Assembly bid no harm.

In terms of percentage of the vote, if 13-14% is reflective of Plaid’s vote strength in Ogmore it could cause problems gaining seats on the regional list in 2016, and if Plaid slip up next year it’s probably going to happen in Bridgend. UKIP are certainly heading towards those figures themselves at the moment – though if no Independent has stood, maybe Plaid would’ve pushed Labour a little closer.

The Conservatives were never going to do particularly well here, so there’s not much to say there. It probably counts as a poor result, even for the Valleys.

What you can say with certainty is this is a poor result for UKIP. It’s unclear how much campaigning UKIP did in the ward, but these are the sorts of areas UKIP need to pick up votes from considering Ogmore has been cited as having characteristics that are UKIP-friendly. Although there were fewer candidates, compared to the last by-election in Newcastle back in May – where they got 20% of the vote – there’s a big notional drop.

Update: There’s extra information in the comments below from Ogmore Vale resident, Richard Mills, and Cllr. Ross Thomas (Lab, Maesteg West). In what has to be a very embarrassing blunder by UKIP (perhaps BCBC’s electoral services department as well), it’s suggested Sally Hyde was disqualified because she works for BCBC and you can’t seek election to a local authority you work for. I don’t know whether this becoming public knowledge affected UKIP’s vote, or whether her name shouldn’t have been on the ballot paper in the first place.

The lesson all parties need to take from this is that living in the ward usually counts for a lot and isn’t as old-fashioned as parties might think it is.

There’s little material change to the composition of Bridgend County Council as a result of the by-election.