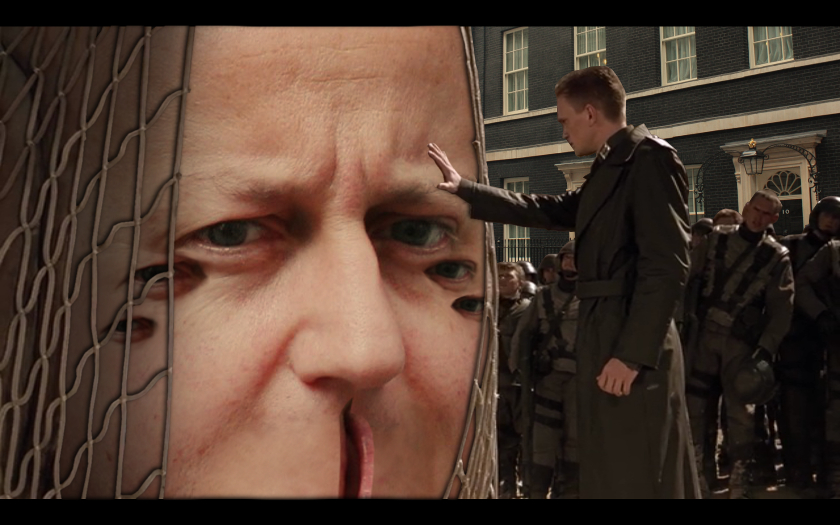 Up and down the country, activists are joining up to fight for the future – “I’m doing my part!” Are you? Join up and save Wales from a whole host of threats splashed over the front page of the local rag. Serving The Party guarantees suzerainship!

“Alright, let’s sum up,” a lecturer in moral and ethical studies tells one group of cadets. “We’ve talked about the failure of democracy; how the social scientists, bankers and SpAds of the 21st Century brought the world to the brink of chaos. We talked about the differences between those who vote and those who don’t, therefore called citizens and civilians.”

“You,” they point to a cadet. “Why do only citizens vote?”

“It’s a right. Something given to you.”

“No….No!” they lose patience with the class. “Something given has no value. When you vote, you are exercising political authority. You’re using force. And force, my friends, is violence; the supreme authority from which all other authorities are derived. Whether it’s exerted by ten or ten billion, political authority is violence by degree. The people we call politicians have earned the right to wield it.”

“You,”they point to another cadet. “Tell me the moral difference between a citizen and a civilian.”

“A citizen accepts personal responsibility for the state, of which they are a member, defending it with lies, damned lies and statistics. A civilian has a life.”

“The exact words of the text,” the lecturer says. “But do you understand it? Do you believe it? Figuring things out for yourself is the only real freedom anyone really has. Use that freedom – as long as you come to the exact conclusion we tell you to.”

The cadets near the end of their course, and they’ll soon find out where The Party will post them. Everything hangs on their final evaluations.

“I’m going career,” one highly thought of cadet says. “30 years in a safe seat.” They discover they’ve been posted to Westminster as a parliamentary researcher for an under-secretary of state, followed by a period in the Third Sector. A safe seat for this bright young thing is a formality. Election are just a minor inconvenience.

Others are even more fortunate, “Baldness is hereditary, so are parliamentary seats!”

Others fared less well in aptitude testing, but they’ve served loyally for years; their knees are starting to click and they’re looking for one last pay day before retirement, ” Congratulations! You’re off to Islwyn. Assembly seat for one term – even you can manage that. Just remember to tell everyone you do your work in the Ty Hywel corridors.”


For those who didn’t study hard enough, or didn’t do enough enthusiastic nodding when listening to a Party big-wig, or just plain didn’t turn up to meetings, the lowest ranks of the Mobile Infantry await – foot soldiers who do the grunt work.

“If you survive you will thank me because you will be born again hard….”

“Anything that depresses interest in elections is key. Do anything to stop people going to the polling station. Make them cynical about the whole process. Make sure they flick the bean or thump the pump on election day instead. Speaking of which, place your hand on that post, private!” A knife whistles through the air and straight into the private’s palm, pinning them to the wall, “The enemy cannot vote, if you disable their hand!”

The training has been brutal, but they were nearly ready to pound the streets. One final task faced them : delivering leaflets around a tough obstacle course filled with dog mess and used syringes. Labour-run council, but Tory bastard cuts via the Labour-run Welsh Government.

The exercise was going well, but one of the recruits stops and begins to think a bit too hard, “Plaid said they would recruit 1,000 doctors. Now The Party are promising to do something similar, even though Carwyn said it was bullshit because we can’t find 1,000….”Their head explodes. The squadron leader cradles their broken body in their hands, “MEDIC!”

For failing to get the deceased recruit back on the path towards victory, the squadron leader is dragged up in front of a disciplinary panel. They deny everything, but the process pushes them to the edge. They’re soon walking down “Washout Lane” with their belongings – but before they reach the gates there’s a commotion….

“War! We’re going to war! It’s legal this time, I promise! “ Everyone stops to stare at the devastation being broadcast on the nearest big screen.

“Oh jeez, is that Glashgae?”
“Goddamn nats whacked us.”

“….The National Executive met moments ago and voted unanimous for mobilisation to destroy the anti-austerity, nationalist, Tory, UKIP, Lib Dem, Green threat. Every day strategists are looking for new ways to kill the opposition.

“You can blow off a limb of your basic political activist….and it can still tweet or ring the doorbell at an inconvenient time. Here’s a tip : aim for the brain stem, and make sure they never ‘hear good things on the doorstep’ ever again.”

“Do you want to know more?”

The troops mass for battle, and the media are eager to cover the fight. “Here’s a bunch of mobile infantry kids who look like the eat nats for lunch,” said an easily-impressed journalist.

“Are you not too worried about fighting the nationalists or Tories….?”

“Shoot first, think later – and you’ve got a whole lot of angry nats, am I right?”

“Some say they were provoked by the intrusion of Westminster’s brand of politics; The Party have lost touch and are trying to take advantage of other people’s misery. A ‘live and let live’ policy is preferable to….”

A goon grabs the mic, “Yeah? Well I’m from Glasgow Central and I say KILL ‘EM ALL! NAE SURRENDA!” They grab their helmet and shout to the massed ranks, “Come on you apes, you wanna live forever!?”

The call to arms works, and the infantry begin their drop. Although they think they have the manpower, they’re outnumbered on the ground. They pass a news crew trying to drum up support for the war effort back home, “It’s an ugly planet; a Tory planet. A planet hostile to life as we….” Body parts fill the air as the journalists are ripped apart.

The mobile infantry try desperately to delete their tweets, “Get out of here now!” one shouts down the camera.

“Crisis for Humankind! Officials admit they underestimated the threat and the opposition’s defensive capabilities. Accepting responsibility, the Grand Marshall resigns. Social scientists from London struggle to explain the intelligent actions of the enemy….”

“When a colony reaches a certain size it gets smarter. It has plans; long-term economic plans….”

“Maybe there’s some kind we haven’t seen yet. A leadership caste or hive brain….”

“Frankly, I find the idea of a Jock or a Taff that can think for themselves offensive!”

Although the incapacitated are entitled to benefits (subject to a fitness to work evaluation – Labour policy), the casualty list makes glum reading for the mobile infantry as there’s hardly any wounded at all. A long struggle lie ahead, but the mobile infantry are ready to go wherever they’re sent in defence of their Party and their plan for fairness.

The next drop was at a remote, quiet outpost. The outpost is littered with bodies. A commander examines the top of their heads, “A colony of kippers must’ve come through here.”They stick two fingers into a wound in the top of one of the corpse’s skulls, “They sucked his brains out.”

Suddenly, they hear cheering. “What’s going on?” the commander asks those running to the scene.

It was suspected that the hive intelligence was located here, and the mobile infantry have uncovered the secret plans of The Party’s enemies. The brain bug is tied down by ropes, as a senior officer approaches it, placing one hand on it as if reading its thoughts. “It’s afraid….” they whisper. They turn to the growing crowd and shout, “IT’S AFRAID!”

“It makes perfect sense, like criticising someone’s anti-racist views as itself being racist – straight out of the BNP play book. I love election time! Service guarantees suzerainship!”

Do you want to know more?