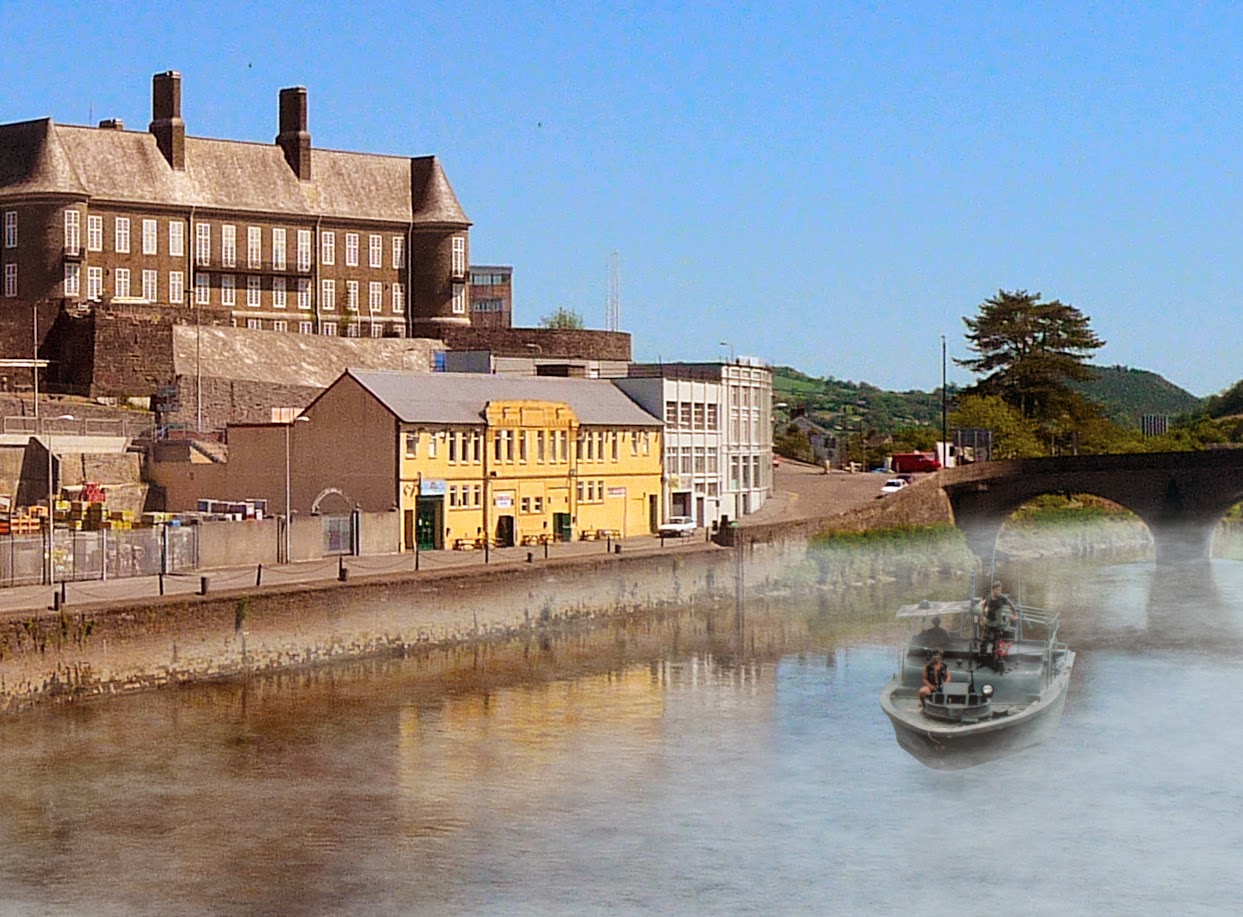 I lie staring up at the ceiling fan; the smell of cheese, chips and muff coming through the window.

Bridgend. I’m still only in Bridgend. Every time I think I’m gonna wake up back in the jungle, I’d wake up and there’d be nothing. I’m here a week now waiting for a mission, getting softer. Every minute I stay in this room I get weaker, and every minute Charlie squats in the bush he gets stronger. Each time I looked around the walls moved in a little tighter.

Two officers arrived to escort me to a high-level briefing.

“In this war things get confused; power, ideals, the old morality, practical political necessity,” the Colonel says.“There’s a conflict in every human heart between the rational and the irrational, between good and evil. Good does not always triumph. Sometimes, the dark side overcomes the better angels of our nature. Every man has got a breaking point. You and I have one. Mark James has reached his. And very obviously, he has gone insane.

“Your mission is to proceed up the Towy River in a Navy patrol boat. Pick up Colonel James’ path at Jail Hill, follow it, and learn what you can along the way. When you find the Colonel, infiltrate his team by any means necessary and terminate his command.

“He’s out there operating without any decent restraint, totally beyond the pale of any acceptable human conduct. And he is still in the field commanding troops.

“You understand Captain, that this mission does not exist, nor will it ever exist.”

At first I thought they handed me the wrong dossier. I couldn’t believe they wanted this man gone. CBE, non-executive director of the Welsh Government, a proper committee man. I bet he even has a blazer with a badge on the breast pocket. Like I said, he had an impressive career. Maybe too impressive.

We make our way to an under siege shoreline called Bu Ri Pờt. Roflcopters overhead drown out our conversation with the CO.

“Sir, you’re supposed to escort us into the Towy!”I shout.

“We’ll see what we can do about that,” he said. He puts his hand on another shell-shocked blogger reassuringly, “Cheer up, son!” He moves to my crew, “We do a lot of blogging around here. I like to finish operations early, fly down to Starbucks….”

I show him the map, “Sir, there are two places we can get into the river. Here and here.”

“That village you’re pointing too is kind of hairy. Got some heavy legal ordnance. I lost a few council motions in there now and again….What’s the name of that goddamn village? Fei Ri Siđê? We’ll pick your boat up and put it down like a baby.”

The medivac explodes. “Savages!” the CO shouts. “Holy Christ, she’s an ‘Independent’. Get over there. Out the right skid right up her ass!”

We made it to the beachhead, but were still coming under fire from legal threats and amendments to motions. “Don’t you think it’s a little risky to blog?” I ask.

“Raw sewage, son. Nothing else in the world smells like that. I love the smell of raw sewage in the morning. You know, one time they built a load of houses that overfilled the sewerage system. When it was all over, I walked up. The smell, you know that human excrement and used tampon smell, the whole cockle beds. Smelled like….victory.

As we glided up the river, I studied one of James’ letters.

“I’m afraid that you would have been worried for not hearing from me. But my situation has become a difficult one. Someone has been really, really mean on the internet. We spent months uncovering and accumulating evidence. When absolute proof was completed, we acted like soldiers. The charges of unlawful spending are unjustified. It was a long-running campaign of harassment and defamation. In a war, there are many moments for compassion and tender action. There are many moments for ruthless action, for what is often called ruthless may, in many circumstances, be only clarity; seeing clearly what there is to be done and doing it directly, quickly, aware.… looking at it. As for the charges, I’m unconcerned. I’m beyond their timid, lying morality. And so I’m beyond caring.”

White Bridge was the last outpost on the Towy River. Beyond it there was only James. I used to think if I died in an evil place, my soul wouldn’t be able to make it to heaven. But now I don’t care where it goes as long as it ain’t here.

James was close. He was real close. I couldn’t see him yet, but I could feel him, as if the boat were being sucked up river and the water was flowing back into the jungle. Suddenly the air filled with arrows and primitive spears.

This was Madge Country. Hundreds of natives stood on the banks near the fortified encampment, their biceps bulging from bowling and the power of faith. Entire boxes of papers are burned, filling the air with acrid smoke. A man approaches with a camera around his neck.

“A journalist”, he said. “Carmarthen Journal. I’ve covered the war since ’08.” He points to the natives, “They think you’ve come to take him away.”

“Can we talk to Colonel James?”

“You don’t talk to the Colonel, you listen to him. The man’s enlarged my mind. He’s a poet-warrior in a classical sense. He’ll just walk right by you and he won’t even notice you. Then suddenly he’ll grab you and he’ll throw you in a corner and he’ll say ‘Do you know that ‘lie’ is the middle word in ‘libel’? I’m a little man, he’s a great man.”

“Wrong! Wrong! If you could have heard the man just two days ago, if you could’ve heard him then. God. You were gonna call him crazy?”

Everything I saw told me that James had gone insane. If I was still alive, it was because he wanted me that way. I saw a sign sprayed on a wall; “OUR MOTTO: APOCALYPSE NAWR, BEST COUNCIL EVER!”

I had my hands tied behind my back and was led down a corridor. I was taken into a dark room, the only glints of light highlighting James’ face as he washed it.

“Have you ever considered any real freedoms?” he said. “Freedoms from the opinions of others, even the opinions of yourself. Did they say why they wanted to terminate my command?”

“It’s a classified mission, sir. They told me you had gone totally insane and your methods were unsound.”

“Are my methods unsound?”

“You’re an errand boy, sent by grocery clerks to collect a bill.”

I was soon put in a holding cell. The journalist was growing frustrated. “Why? Why would you do this?” he asked. “Feeling pretty good, huh? Why? Do you know that the man really likes you? But he’s got something in mind for you. Aren’t you curious about that? I’m curious. I’m very curious. Are you curious?

He’s been setting them straight for years. He prints what he’s told after all. I was knocked unconscious and laid on the floor of the council chamber.

“We are the hollow men and the stuffed men together filled with straw,” James said. “Alas dried voices, when whisper together quiet and meaningless wind in dried rats’ feet over broken glass our dry cellar. Sustainable development.”

“Do you know what the man’s saying?” The journalist asked. “Do you? What are you gonna do when you go from here to Venus? That’s dialectic physics, okay? Dialectic logic is, there’s only love and hate. You either love somebody, or you hate them.”

“Mutt! You mutt!” James threw a banana at the journalist.

“Look at this shit we’re in, man,” the journalist says. “This is the way democracy ends, not with a bang but with a whimper.”

On the river, I thought that the minute I looked at him, I’d know what to do. But it didn’t happen. I was in there with him for days, but he knew I wasn’t going anywhere. He knew more about what I was going to do than I did. If the generals could see what I saw, would they still want me to complete my mission? More than ever, probably. And what would his people back home want if they ever learned just how far from them he’d really gone? He broke from them and then he broke from himself. I’d never seen a man so broken up and ripped apart.

“I worry my children might not understand what I’ve tried to be. I would want someone to go to my home and tell them everything – everything I did, everything you saw – because there’s nothing that I detest more than the stench of lies. And if you understand me, you will do this for me. I’m trying to take someone’s home after a court ruling because they were nasty to me on the internet.”

I was soon back on the boat. They were gonna make me a major for this. Everybody wanted me to do it. Him most of all. I felt like he was waiting for someone to take his pain away. He just wanted to go out like a soldier on the wrong side.

I remember what James said, “We spend hundreds of millions of pounds of taxpayers money, but the law won’t allow an ordinary citizen to question the use of that money because it’s deemed obscene.”

Back in Bridgend with cheese, chips, muff and the ceiling fan. There’s a knock at the door. More officers arrive to hand the dirty work down to someone else.“….Your mission is to proceed up the Cleddau River in a Navy patrol boat. Pick up Colonel Parry-Jones’ path at…