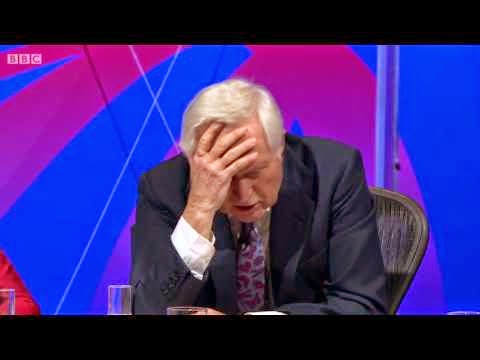 “Good evening and welcome to tonight’s edition of Question Time. We’ve crossed the Severn Bridge into Mordor, and we’re in….How do I pronounce this? Nuo…Nee…”

A young women, working for nothing in hope of landing a sitcom pilot on BBC3, whispers in the host’s ear….”I’ve been told by my assistant with the lovely bottom that it’s pronounced ‘New Port’.

“At the next election, you’ll be given the burden of choosing who will scrutinise public service delivery and spend hundreds of billions of pounds on your behalf,” he says. “We’ll make that choice easier by giving you the impression no one deserves that responsibility. We’re joined tonight by:

“….Some over-privileged tosspot, who got a job with Daddy’s friend the MP straight out of Cambridge and has never set foot inside an ASDA or queued at a post office….

“….A woman with zero personality, who used to work as a middle manager in a council social services department – so tells people what to do by instinct, not because she’s earned that right….

“….Armitage Shanks – former scat star, convicted heroin dealer and guest panelist on ITV2’s ‘WHAT’S THAT SMELL!?!!!?’ – which makes him perfectly qualified to discuss parliamentary propriety and the situation in the Middle East.”

After the applause dies down, the host indicates to his right, away from the desk, “As we’re in Wales, we also have Elfyn Llwyd from Played Cumroo to give us a Welsh perspective. How are you, Elfyn?”

“Stalking bankers bonuses!” Elfyn struggles with all the determination of Harry Houdini to escape his harness, but he’s dragged behind the gaudy stage background by two skin-headed heavies borrowed from Jeremy Kyle.

“See you in a few months,” says the host, turning to the others.“Isn’t he quaint?” he whispers under his breath,“We call the other one ‘Uncle Fester’.”

The host arranges his notes, “Our first question is on pensions reform.” He randomly points into the audience, “The man or woman towards the front wearing clothes.”

The being clears its throat, “What does the panel think about pensions reform?”

“I used to be a tax accountant and pensions adviser,” the over-privileged tosspot says, “so I’ll start by saying that we’re dealing with decades of over-promises and under-investment. Many people feel they’re left out because of….”

The host allows the opposition representative to rudely interrupt, “I…..*completely*…. disagree which what the opposition panellist said. We’ve suffered from decades of under-investment and over-promises, where many hard-working ordinary people feel they’re left out….”

The host cuts her off, pointing to a mumbling coming from the audience. It’s an angry woman with clapping bingo wings – “Yes, you madam. The one who looks like a rhino on the brink of a coronary episode.”

“I was waiting for a BUS the other day and it’s….it’s…..it’s…disgraceful that our boys are over here while money falls out of my purse because it’s moved abroad!”

The audience member points to the government-appointed knobend, her face imploding in on itself in unfocused rage. “What would an out of touch tax accountant like you knows abouts pension reform!? Why don’t you JUST ADMIT IT!?” * Applause *

“You made some interesting points,” the host says, “Let’s ask the person who used to smear poo on his face for a living what he thinks about pensions reform. Armitage?”

“We need to get real. We shouldn’t just privatise pensions, we should privatise pensioners. As an insider, I can tell you GILF is a growth industry, but we’re held back by political correctness. We should start a common sense national debate on whether Granny can take 10-inches for Blighty in any orifice that’s available.”

Armitage savours his own vintage from the glass in front of him.

“We now have a question on Europe. Yes, the gentleman in the Tam o’ Shanter and saltire shirt who’s been positioned right in front of the cameras….”

“Well I’m not,“ Armitage says, to gasps from the audience. TV loves nothing but controversy.

“We’ve spinelessly given away all of this proud country to Europe. Literally given it away. It’s not the United Kingdom anymore; it’s literally EuroTerritory 5. When will Britain literally tell the world what to do again? How do we literally make Britain great? If you don’t believe the answer to that is agreeing with everything I say, you’re a gutless wonder who deserves to be treated with nothing but the utmost contempt.”

“What are the answers to your own questions?” the host asks with a sly grin.

“I don’t have a clue, but if I go on telly enough times and repeat it often enough, surely something will happen. Can’t stand Europe, me. That’s what the sea’s for, innit! Did we sacrifice all those men on the Normandy beaches for a peaceful, economically interdependent and conflict-free Western Europe for nothing?”

“Where’s your fifth wife from?” the government tosspot asks.

“Mönchengladbach, but that’s besides the point. Europe is undemocratic….”

“Didn’t you stand for the democratically-elected EU Parliament? And wasn’t that your Alfa Romeo with the dodgy tyres I saw parked across three disabled spaces outsi….” the former social-worker is shouted down, as flecks of urine – and something more unpleasant – splatter out of Armitage’s mouth.

“Nobody in this audience wants to hear the same old hypocrisy from the same old corrupt parties and bent politicians! We need someone to stand up for the hard of thinking in society! We need a revolution! Sod the lot of you!”

“Have you considered standing for Westminster, Armitage?”

“Now that you mention it, I’m always standing – but I never win.”

“We’re doing our best,” the host replies, before scanning the audience. “The gentleman about three seats in, second row from the back on the left hand side with the long, greasy hair, wearing the green gilet with the holes in it.”

“The question I would like to ask the panel is….what would you do if there were these mini black holes, and they was, like, all over the place causing the temperature of the planet to rise to 1000C for a split second and, like, afterwards all dogs were the size of cats and all cats were the size of dogs?” * Applause *

“We deserve a full and frank public debate on this very important issue, and it’s not helped by the austerity my party is committed to continuing despite our public opposition to it,” says the opposition panelist

Armitage thinks for a moment. Potatos could be grown in his brow furrows. “Look at this grin,” he points to his gurning mouth. “It’s clearly a mouth that’s dealt with a lot of effluent down the years. So, I’d rip my own face off and eat it.” * Applause *

“I’ve often wondered if having more people who know what they’re talking about on these panels  – instead of comedians and journalists – would provide us with proper answers,” the host points towards another victim of the education system. “Yes, the lady at the back with the massive hole in her….oh, sorry, mouth. I mean mouth.”

“I’d like to remind everyone that next week’s episode comes from from The Mung Theatre in Yorkshire’s magnificent Windybutt Vale. Our panelists will include the Minister for Departmental Requisitions; Shadow Secretary for Parliamentary Undercrackers; a Liberal Democrat – we’re thundering across the countryside on horseback to flush one out – and someone recently described as ‘The left-wing Pub Landlord’, satirist and stand-up comedian, Owen Jones.”

The host continues selecting victims, “The gentleman who has no chance to survive make your time for great justice…..”

The government panelist gets all indignant, “….let me finish my point!…..Let me finish!….Right, I’m finished.”

“Armitage,” the host says,“I believe you had some recent personal experience of the National Health Service?

“That’s right, Bernard. My little fella took a bit of a bump on the head at home.”

The audience let fly with their motherly sighs. Unlike any other politician in the known world, Armitage is just like them – a real, completely infallible human being made of flesh and blood. He’s not a caricature or media-created golem at all.

“Can’t take your eyes off them for a second, can you,” the host says. “You’ve got to watch these slippery surfaces….”

“Well I was going in at a rather acrobatic angle, and there wasn’t enough letch water….”

“I though you said this was about your little fella?”

“Yup. Snapped me banjo string. Brave little fella. The sheets looked like an elephant’s maxipad. Didn’t stop me though.”

The opposition panelist rolls her eyes as the audience gasps, “I don’t see what relevance this has to anything we’re dis….”

Armitage cuts her off, “….You want to know what’s relevant!? Politics is no longer about policy. Thanks to people like me, you, the audience and Katie Hopkins it’s about who can shout the loudest and who can be the biggest dick in the room. And as all of you who’ve seen ‘Deutsche Arschspiel VIII’ will know….”

Armitage climbs atop the desk, holding a CD player that blares out the rousing oom-pah intro to the national anthem of Marbella – The Birdie Song. His hips start swinging. The collective IQ of the studio descends with his flies. He’s not in. He’s definitely out and shaking it in everyone’s faces.

The host takes a discreet peek over his half-moons, his face a mix of horror and quiet admiration, “Could you tell us more about your Prince Albert?”

“Validate me, public!” Armitage says – the audience transfixed into hypnosis by the faint glint of steel that comes with each whir of his meaty helicopter roter – “Validate me!” They lap it up, while Twitter is filling with tw@s.

Seeing that herself and her party are losing their grip on public opinion, the opposition panelist shuffles awkwardly in her seat as her hands disappear below the desk. “Look,” she says, dragging an arm out, triumphantly hoisting a bloodied Prince Charles aloft, “I’m on the blob!”

“Now that’s just disgusting!” Armitage glowers towards her as the song draws to a close, “You really know how to lower the tone of a serious debate on serious issues!” He turns to the audience, “We don’t need no EU directives on zip safety, do we!?”

“No!” the audience shouts.

“I say bollocks to voting!” he points to the panel. “And bollocks to Brussels!” Armitage spins around theatrically, doing a few in-time pelvic thrusts with the final clap-clap-clap-clap before zipping himself up.

Unfortunately, there was an unexpected item in the bagging area, and his majority was reduced from 9 inches to 3. The stunned silence is broken only by blood-curdling screams.

“Well,” the host says, quite unsure how to proceed. “Inform, educate, entertain. We attempt all three, but fall short in each case. As always, we end with a joke without a punchline.”

“Something, something, The Aristocrats. Goodnight.”