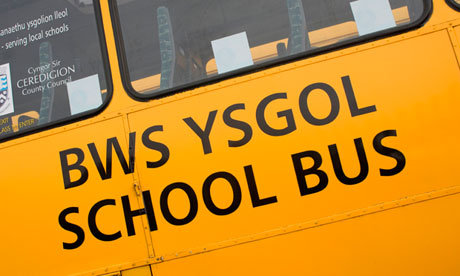 Although I covered this in September, with Bridgend Council’s Children & Young People’s Committee recently reporting back (doc) on proposed changes to school transport in the county, it’s worth returning to again.

Subject to public consultation, which I understand is due to be launched next month :

It’s estimated that the total savings as a result of the proposals – if enacted in full – would be just over £1.2million.

The Children and Young People’s Committee recommended to the cabinet that voluntary-aided provisions should remain the same as Welsh-medium provisions (explained later). They also recommend free transport for college students and sixth formers be maintained for those receiving Educational Maintenance Allowance.

If the proposals promote walking and cycling to school, then it could be beneficial. But some aspects of it could, for some pupils – especially those who live beyond a reasonable walking/cycling distance – just land their families with a sizable bill in order to attend the school of their choice.

The Impact on Bridgend’s Faith Schools

The two types of school going to be hardest hit by the proposals (as they are) are state English-medium secondaries and voluntary-aided (VA) faith schools.

There’s been criticism that faith schools aren’t protected to the same extent as Welsh-medium schools, with Wales’ church leaders uniting to issue a statement earlier this monthcondemning changes to school transport policies by local authorities.

Similar policies have been pursued in neighbouring Neath Port Talbot, as well as Flintshire. I wouldn’t be surprised if it spreads nationally as cuts start to bite, hence the urgency in the statement.

Faith schools in Bridgend County have subsequently set up a Save Our School Buses campaign site and Facebook page.

As to why faith schools aren’t under the same umbrella as Welsh-medium schools, local authorities only have a statutory obligation to provide free home-school transport to pupils who attend county schools.

All Welsh-medium schools are county schools while most, if not all, faith schools are voluntary-aided. That means they’re under the control of a diocese or charitable foundation. Local education authorities only part fund them and have little, if any, influence on school governance.

BCBC currently propose to only provide free home-school transport for VA pupils as long as they attend the “nearest available school” and live beyond the statutory distance.

Welsh-medium schools are protected because free transport provision has to be“responsive to parental preference” as set out in the Learner Travel Measure 2008. That means you can choose to send a child to a Welsh-medium school – regardless of whether it’s the nearest available school or not – and still receive free transport as long as you live beyond the statutory distance.

Until now, BCBC have applied the same policy to faith schools, but they’re not legally obliged to, hence proposing to axe it. As mentioned earlier, the Children & Young People’s Committee want them to change their mind.

Faith leaders want transport provision that’s “responsive to parental preference” for their own schools. The rights and wrongs of that is a debate in itself – and a can of worms I’d prefer not to open – so in the interests of objectivity I’m going to go along with it.

Where will the impact be felt?

We know the numbers. In total, this will affect around 1,800 learners. Using Google Earth, it’s worth trying to determine precisely where in Bridgend county the impact will be most keenly felt. The files are quite large, and as a result and may take time to load. 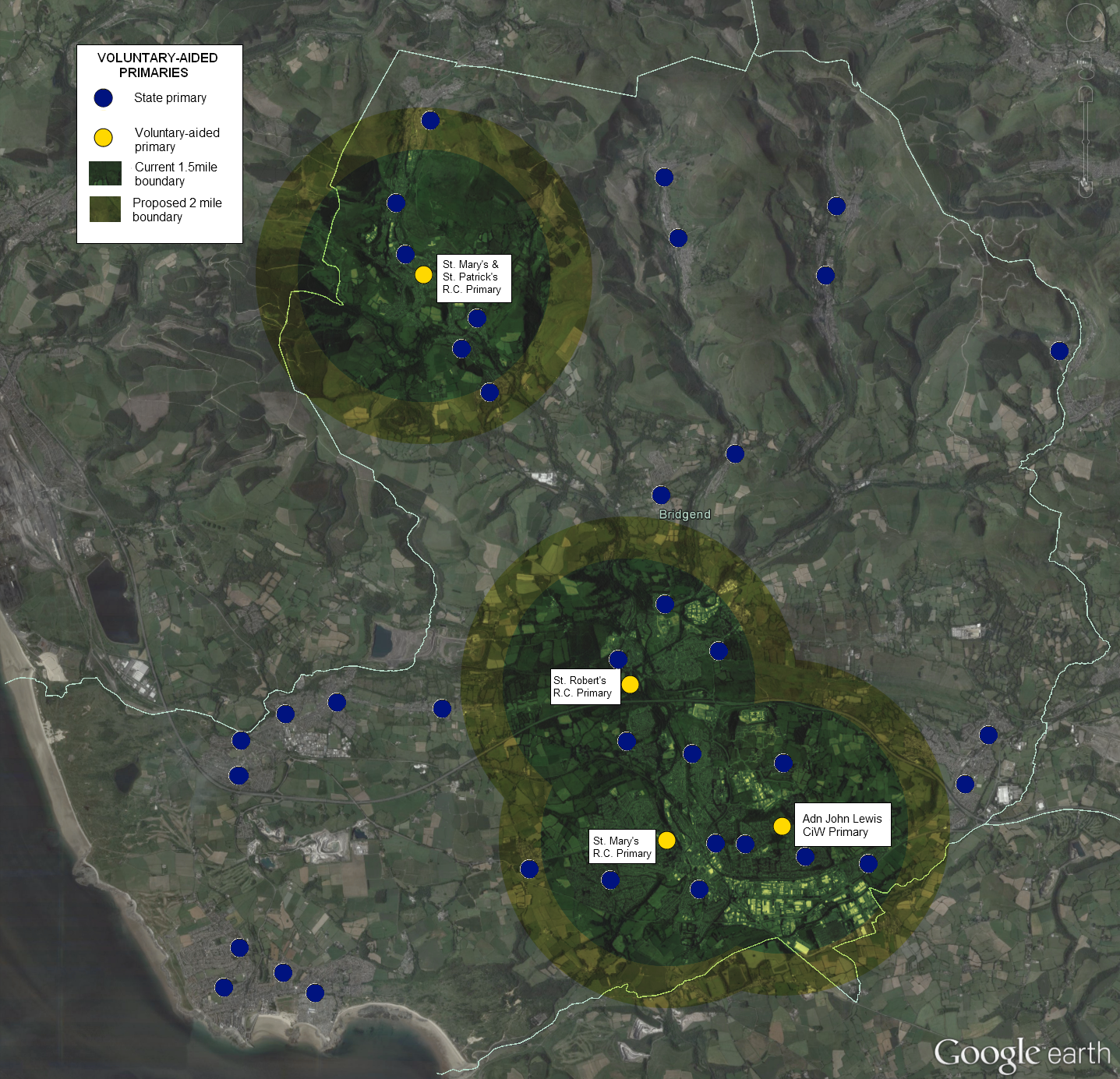 In addition, Archdeacon John Lewis (Brackla) is Bridgend’s only voluntary-aided Church in Wales primary. Pen-y-fai Primary is also a Church in Wales school, but it’s voluntary-controlled, meaning it’s a state school in many aspects, so it’s not affected by these proposals.

The green and yellow shaded area represents the current and proposed boundaries for free home-school transport – a crude radius to give you a rough idea, so it’s not 100% accurate.

Blue dots represent state primaries (with a few obscured by labels). If a pupil lives beyond the boundary, but closer to a blue dot than their choice of voluntary-aided school (yellow dot), it’s likely they’ll no longer receive free home-school transport.

I think that illustrates quite dramatically how big a swathe of Bridgend county the proposals impact. It’s hard to find any part of the county where a pupil lives beyond the statutory boundary, yet far enough away from a state school to remain eligible for free transport.

It’s like a game of Minesweeperwith state primaries acting as the mines, except they’re everywhere. 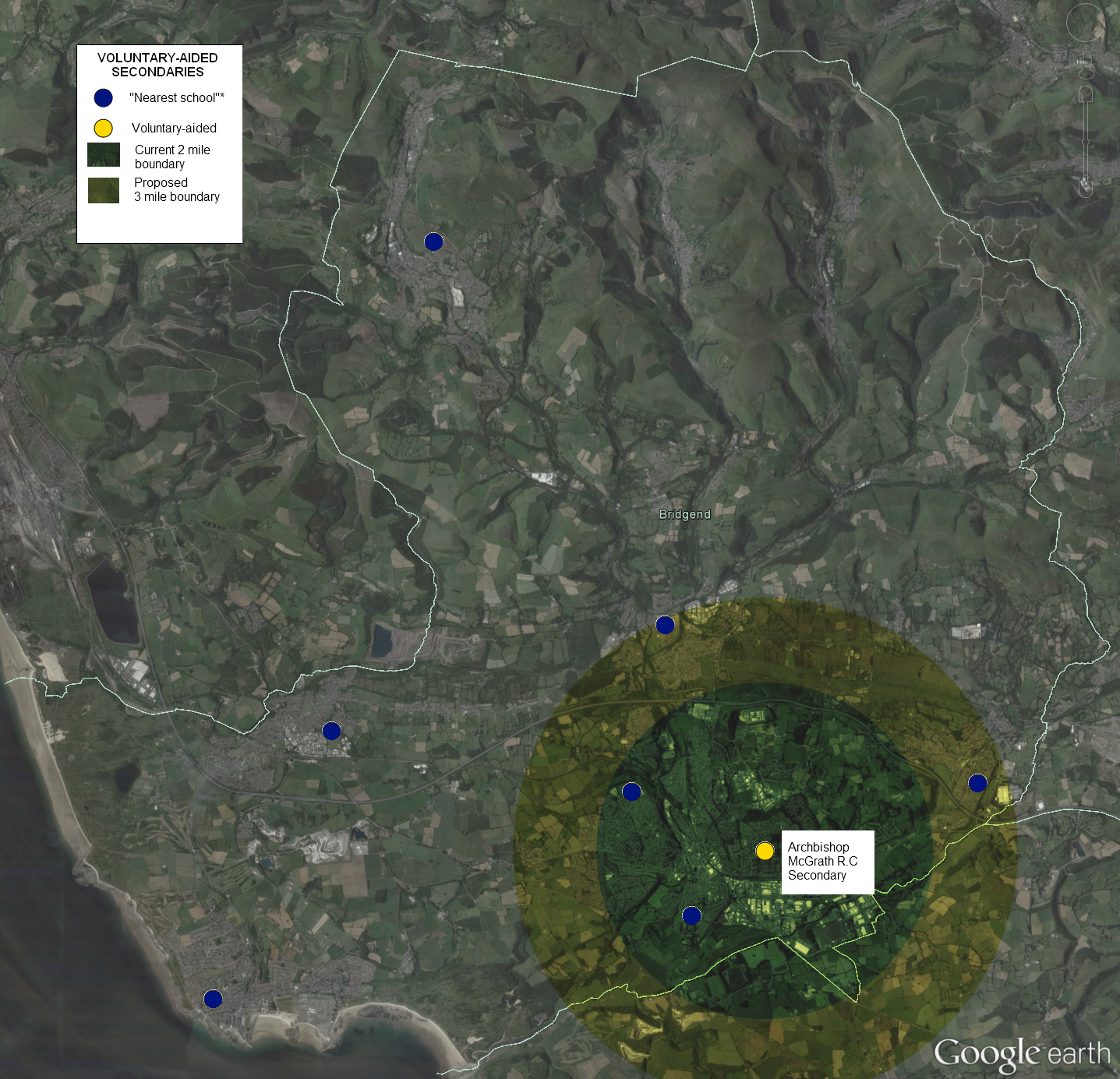 Under the draft proposals, if a pupil lives beyond three miles, and closer to a blue dot (a state school) than Archbishop McGrath School, in most cases they’ll no longer receive free home-school transport. So the policy – as it is – would effectively end most free home-school transport for Archbishop McGrath pupils, simply because of the spread of state secondaries around the county. 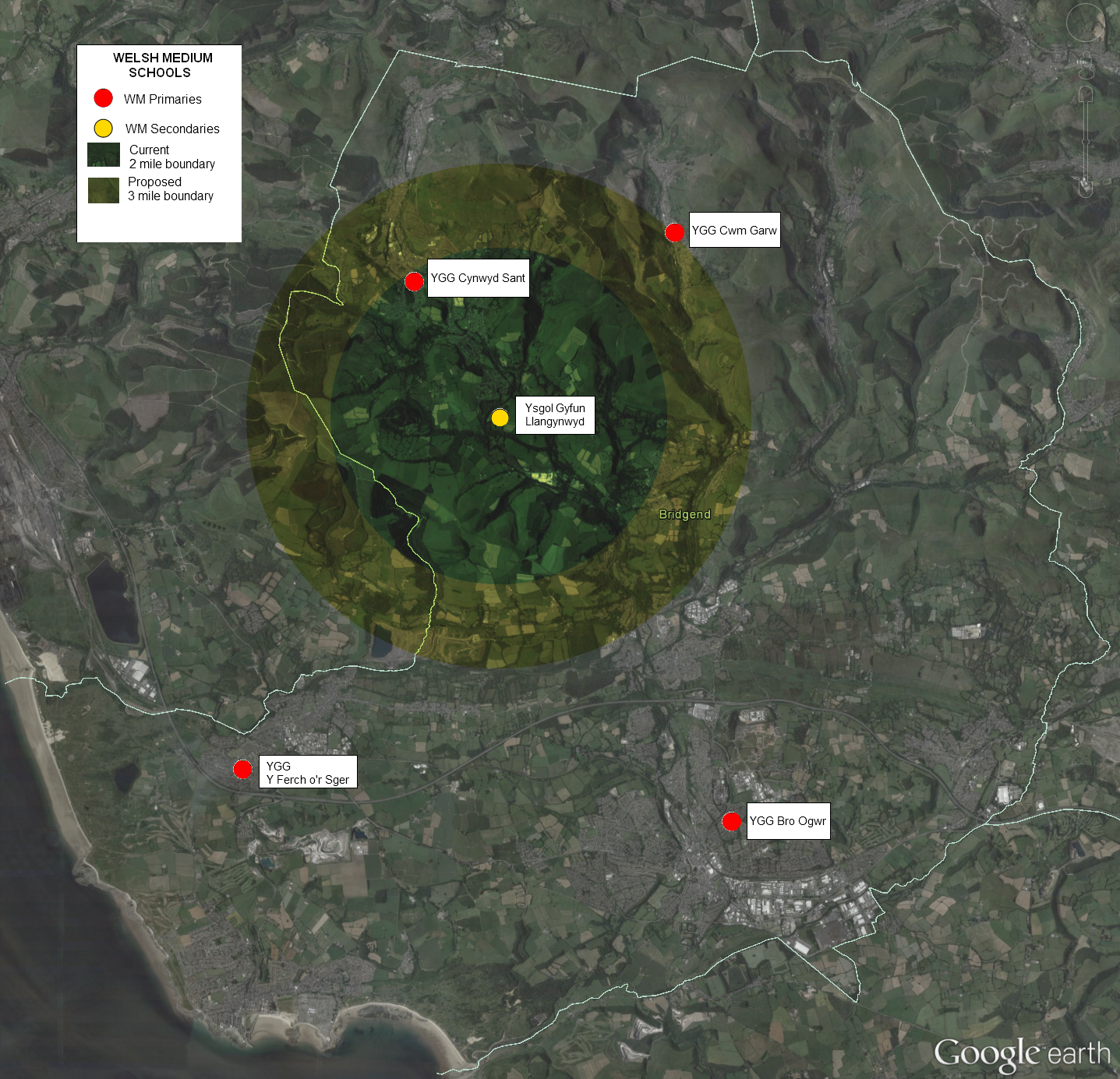 WM schools are affected by the proposals, with a bus being lost to Bro Ogwr and Cynwyd Sant schools as outlined in the original proposal (doc).

It’s likely WM pupils living in the Nantyfyllon and Tondu areas will lose their free transport to Ysgol Gyfun Llangynwyd due to boundary changes. Although parts of the Garw Valley fall within the proposed 3 mile boundary, because there’s no direct route between the two valleys, it’s shouldn’t result in any change.

However, as the map demonstrates, it’s obvious why free transport to YG Llangynwyd will be maintained. It’s a relatively distant location, away from the main population centres in the south. Free transport is protected regardless of whether or not there’s a non-Welsh medium school nearby. 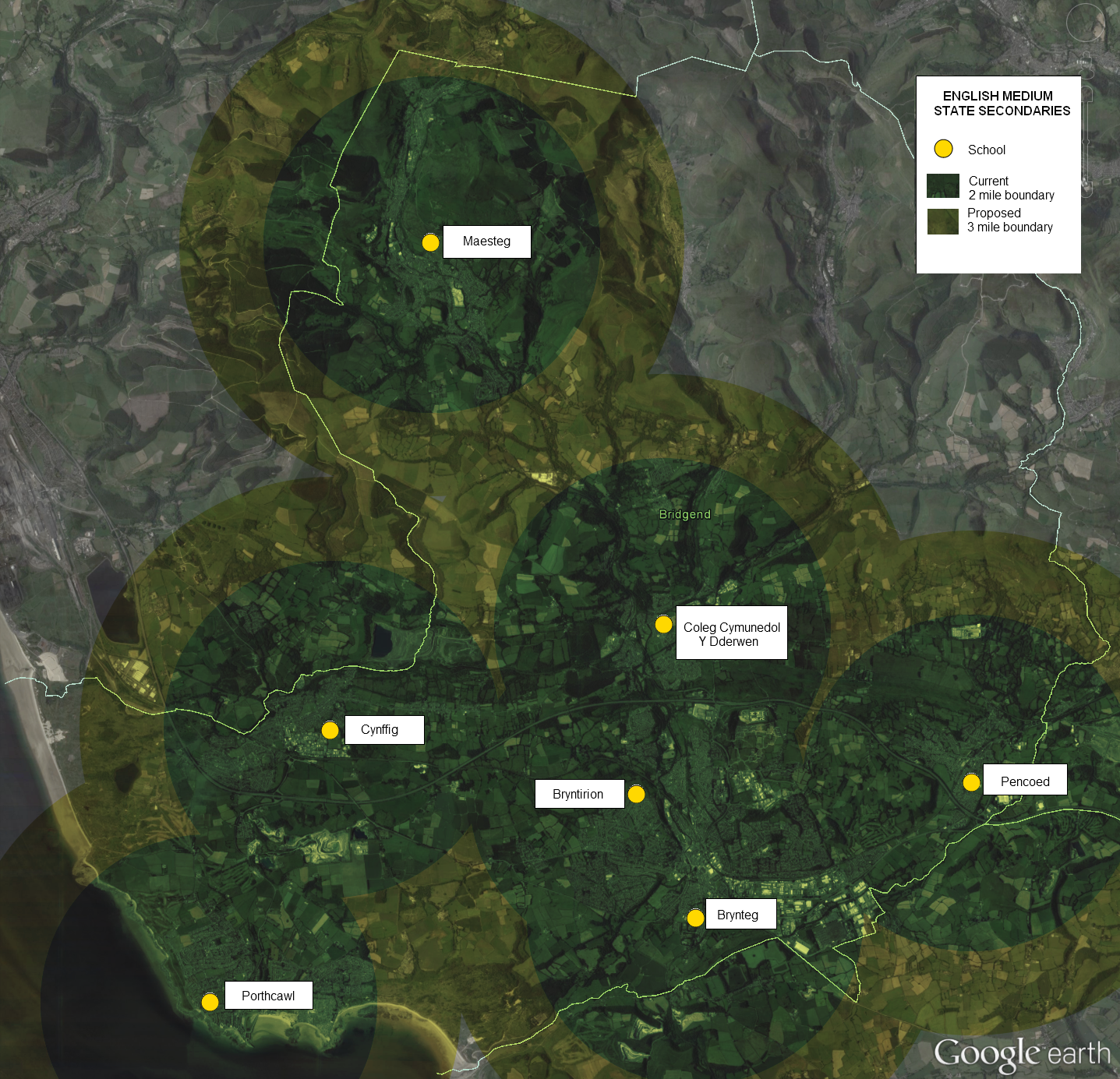 I realise that map’s not much use, as I doubt there are any Porthcawl Comprehensive pupils living on Tusker Rock or in the Merthyr Mawr sand dunes.

It won’t affect Bryntirion, Coleg Cymunedol y Dderwen, Pencoed and Porthcawl pupils too much. Bryntirion doesn’t have any bus pupils, while the other schools only lose 1 bus each.

Porthcawl’s catchment area is effectively confined to Porthcawl itself (walking/cycling distance) and a few hamlets on the outskirts like Tythegston and Kenfig.

Only Coety Primary is any real distance from Pencoed Comprehensive (and could be considered a “dangerous route”), while transport for any pupils from Dolau Primary in Llanharan and Brynna Primary is provided by Rhondda Cynon Taf Council.

Most Coleg y Dderwen pupils either live in the Pen-y-fai, Sarn and Tondu area (walking/cycling distance), or the Garw and Ogmore Valleys – which are comfortably beyond the 3 mile boundary. As I understand it, most pupils from Abercerdin Primary in Evanstown (an “enclave” of Bridgend County near Gilfach Goch) attend Tonyrefail Comprehensive.

Maesteg Comprehensive pupils living in the Caerau and Llangynwyd areas are likely to lose free transport. Most Maesteg pupils will live within the current 2 mile boundary, let alone 3miles. Caerau now has a segregated cycle lane to the school too.

It’s a similar situation for Cynffig and Brynteg pupils. Free transport will effectively end for most pupils at both schools due to the very tight catchment areas. In terms of Brynteg, it could affect those living in Litchard and the Coity end of Brackla in particular.