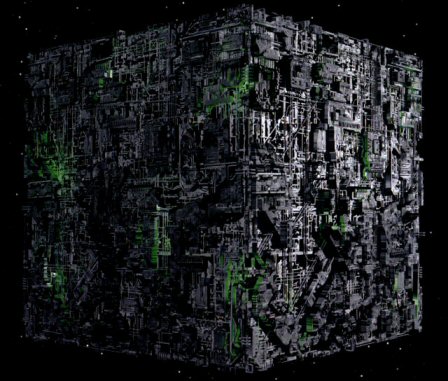 It’s one of the great paradoxes: What happens when an unstoppable force meets an immovable object? The unofficial answer, is that neither can exist in the same universe at the same time. Until now.Education Minister Leighton Andrews and Local Government & Communities Minister Carl Sargeant have become one. The procedure was carried out by a cruel scientist with insultingly-low standards of medical ethics.

“When we turned up at Cardiff Met to ‘have a quiet word’, they accused each other of completing the Lament Configuration,” Larldrew said, from their secondary face.“They were willing to throw the vice-chancellor to our feet, allowing us to feast upon their soul. “Luckily for them, we’d just built up a tab on Caroline Street with a Welsh Government credit card. Chicken curry off the bone – can’t go wrong.”

“A man is defined by his actions,” they said in their first public appearance in the Senedd. “By taking this step, we will ensure all will unite on a sustainable, cube-shaped, Welsh Labour planet.” The voice became unintelligible as Larldrew sat down, but I felt the unmistakable urge to get my ass to Mars.

First Minister Carwyn Jones refused to join the melding of body and mind, probably because seeing the power trio lined up together drew unflattering comparisons with Martian prostitutes. He did, however, express support for his new minister, saying he, “acknowledges the bravery in undertaking this dramatic lifestyle change. I’m sure that the rest of the chamber will help them through this difficult period.”

Leanne Wood immediately put Plaid Cymru’s legion of policy committees to work on creating an official stance on trans-people people. The results should be published in 2050.

The Welsh Conservatives agreed that merging ministers would result in marginal cost savings, which should raise enough money to cover the FOI requests they put in to discover the costs in the first place. The Lib Dems said something inconsequential too.Llywydd Rosemary Butler updated the Assembly’s standing orders – instructing AMs to only approach Larldrew from the side, never to stand directly behind them and ensure they’re washed and groomed. She also permitted AMs to feed Lardrew fun-sized Mars bars by hand as an occasional treat.

Bethan Jenkins AM will be assigned to mucking out duty, after being rebuked for using the forbidden letter “I”. It was reported in the Western Mail – via an “Assembly Insider” – as “Assembly Member disgraces self and planet with bizarre republican abuse of taxpayer’s letter.”

£200,000 has been spent upgrading the Senedd and Ty Hywel, including a feeding trough, modified box for transport and hay bales placed at regular intervals. Costs will be recouped by charging children to ride the ministers around Cardiff Bay. It’s understood that Larldrew – The Experience will become Wales’ 10th most popular visitor attraction by 2015.

The merger between the Department of Education and Skills and Department of Local Government & Communities will result in several improvements, including:

It wasn’t long until they regretted their decision.“Kill us now, please,”they said in an exclusive interview, a week after the merger. “We thought this would make us more efficient,” the being sobbed,“but we’ve become inflexible and predictable. We do the same things over and over again, and we don’t have many options to innovate anymore. “We pretty much go in whatever direction the half belonging to Carl decides – sometimes he’ll get distracted by a stray dog or a discarded scratchcard. Our arms are numb from punching Anglesey councillors in the face, but Carl seems reluctant to go west of Swansea.” One of the faces contorted in fear, making meep-meep noises.

“Carl’s had to work around chemicals that would make your skin crawl, melt and then fall off. However, mention the Loughor bridge to him and he goes quiet.

“There’s a scary troll living under it called Mark. Plus, seeing how the people there really love their bowling, we’re worried they might mistake us for a bowling ball instead of a much-needed wrecking ball.”

Larldrew also endures unacceptable levels of hostility from the public. “The Dr Who actors chundered their lunch into the Bay when they saw us crumple past on our funny-angled limbs,” Lardrew said. “They realised that it wasn’t fabric from an escaped balloon waving in the wind, but human flesh.

“We’d much rather take our chances outside the Norwegian Church, and end up on a menu in a Michelin Star Tokyo restaurant, than have some scrote from Aberdare, geeing us to go faster, stabbing us in the back with a biro.”

To counter this, a £150,000 per annum post has been set up at third sector organisation, People4Life2Positivity. The organisation’s role is to go into schools to tell children that insulting Larldrew – specifically – is naughty.

Dai is an ex-Labour community council candidate for Blaenc-y-ty-blaenc. It’s a “strong, vibrant” valleys community, where the school is falling apart, they don’t have permanent well-paid jobs, pay extortionate energy prices but are yet to be told that Maggie Thatcher isn’t commanding the sun anymore.

Dai couldn’t win here wearing a red rosette, which makes him the ideal person to handle £4million of public money.

After one week, People4Life2Positivity gave up, and went to a cricket game instead, parking their cars with wanton illegality. They thought that EU funding, and putting a Labour rosette by the windscreen, provided diplomatic immunity.

Meanwhile, a proposed merger between the Welsh Health and Environment departments has been abandoned.

A specially commissioned report by independent expert Prof. Jorg Panzerschreck, suggested that burning the bodies of the recently, or soon to be, deceased would, “create a more sustainable Welsh NHS….reducing the numbers of chronically ill people sustainably….provide a sustainable supply of renewable biomass energy,” but they needed, “compelling hard facts,”to make an, “overwhelmingly confusing and forceful case to the public.”