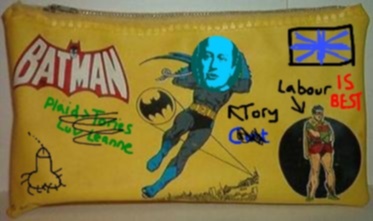 It began like any other Tuesday afternoon, with First Minister’s Jeopardy. Rhodri Glyn Thomas began with the clue, “The Haven“, to which First Minister Carwyn Jones answered “What is Plaid Cymru’s policy on free cheese and pickle sandwiches for school leavers?” winning 20 points, and moving to the tiebreaker round.

After a ritualistic gut-barge to test strength with star prop Carl Sargeant, Andrew RT Davies returned to his seat, where he was seen rifling through his Batman pencil case, “Anyone seen my Maggie Thatcher rubber?” He looked accusingly towards the First Minister, “You’ve bloody nicked it, avenchew! Mr big shot with ‘is posh binder!”

“Wha’?” a visibly confused First Minister replied. His friends whispered something in his ear, to which he responded, “What is the Welsh Conservative policy on nuclear submarines in Milford Haven?” Unfortunately, this wasn’t accepted as an answer.

Stationery dysmorphia was investigated thoroughly by the Assembly’s equalities committee recently, with 22 recommendations, including that AMs were to be issued with “those pens that change colour”. That doesn’t seem to have satisfied everybody.

Sitting with his arms folded, the Leader of the Opposition sulked, demanding that he be given, “One of those pencils which you twist and the lead comes out to ‘owever long you want it – like what Carwyn’s got.”

After Bethan Jenkins was given a reprimand for breathing, and Peter Black for eating an egg sandwich in the chamber, the session continued, interrupted by the discovery of a crudely drawn penis and testicles in the corner of the First Minister’s prized exercise book.

After exchanges of “Come on ‘en, butt!” between Carwyn and Andrew, Mrs Butler threatened to send the pair to the Petitions Committee as punishment, as well as forcing them to spend lunchtime in her office, instead of kicking footballs against the Pierhead Building. She reminded the chamber that the building was “out of bounds” and “if you (AMs) break any of the windows, you’ll have to pay for them to be replaced.”

Leanne Wood was told off for flicking tiny bits of rubber towards the First Minister with a ruler.

“Oh! Warrayou doin’ with my rubber!” Andrew RT Davies shouted, breaking the few minutes of peace in the chamber. By doing so, he put Ms Wood off her stride, and a piece of rubber hit Lesley Griffiths in the eye, sending her running out of the room in tears, holding her face.

Rumours have spread amongst political commentators that it’s a sign Leanne fancies Carwyn, but this has been strongly denied by Kirsty Williams, who it’s believed was being consoled in the girl’s toilets later that afternoon.

This incident lead to no-mark Labour backbenchers making their only contribution that week – a choral “Oooooooooooooooooooohm!” – followed by accusations of “smelling” and attending weddings of fictional characters.