South Wales Police are investigating possible fraud at Maesteg Town Council by its former Clerk following the publication of a damning internal audit report into the council’s 2019-20 accounts (pdf).

A police investigation isn’t, in itself, a sign of guilt or wrongdoing and there should be a presumption of innocence.

The internal audit’s findings include:

Maesteg Town Council has since agreed to new financial practices and £95,000 of the missing money has been reclaimed. Whether that’ll be enough to avoid a full Wales Audit Office investigation, I don’t know.

Not confined to Maesteg

The town council’s Labour group issued a strongly-worded statement calling for the resignations of Llynfi Independents who were in senior council roles at the time, but the problem with making this a political argument rather than one of good governance is that it can quickly become a case of throwing stones in glass houses.

Since the last local elections in 2017, Maesteg Town Council had a Llynfi Independent (many of whom are ex-Labour) group majority for 18-20 months – though the council returned to a Labour majority during the period the audit covers. For the rest of the time, it’s been a Labour-majority council and Labour members sat on the council’s finance committee during  the period in question.

That doesn’t mean Labour or Llynfi Independents are exclusively to blame for this. The ultimate responsibility for finances and administration lies with the former Clerk, and at town and community council level the council is collectively responsible for its conduct and decisions.

Maesteg isn’t alone in this either. 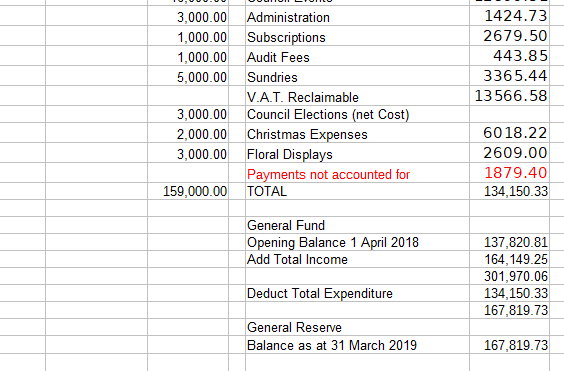 In March 2019, just under £1,900 of unexplained payments (above) were listed in Laleston Community Council’s accounts for  2018-19, coinciding with the resignation of the (Labour) Chair, hurried changes to financial management and, I’ve been reliably informed, a police caution. The internal audit report hasn’t been made available to the public as far as I can tell.

A similar situation to Maesteg occurred at Ynysawdre Community Council during 2016-17 (pdf). The former Clerk failed to keep proper records, meaning payments weren’t accounted for – some of which were considered to be suspicious. Invoices were missing or falsified, while work was reportedly paid for and never carried out.

It’s worth stressing that sitting Ynysawdre community councillors aren’t involved and following the clear-out of councillors in 2017, I’ve been reliably told that Ynysawdre was left with around £3,000 in its bank account. A few months before that election, the former Clerk called the police to respond to a group of residents who turned up to question where their precepts were going – and it seems they were right to be asking questions.

Ending on a positive note, the financial situation in Ynysawdre has now been completely turned around and it has one of the lowest precepts in the county.

According to Audit Wales, in 2018-19 a third of all community council accounts in Wales were qualified (deemed unacceptable).

With the role of town and community councils set to change in the Local Government Bill (introduced in the Senedd towards the end of 2019) – and the responsibilities of community councils increasing through policies such as Community Asset Transfer – proper collective accountability by community councillors and Clerks is needed more than ever.

BCBC has already raised the possibility of mergers as they seek to redefine their working relationship with the lowest tier of local government.

The majority of community councils take their work seriously and there are probably more examples of good work and community spirit than corrupt or negligent practices.

That said, I doubt I’m the only person getting tired of the constant backbiting, finger-pointing, passive-aggressive “he said, she said” press releases, cover-ups and childish social media spats involving some the county’s community councillors.

It’s worth reminding all Clerks and community councillors of all party and non-party affiliations in Bridgend that they’re responsible for a significant amount of taxpayers’ money and are supposed to stand up for the interests of their respective communities, not themselves or their parties/groups.

They’re lucky that for most of the time their activities go under the radar and are perhaps even under-appreciated.

But if they can’t behave like grown-ups and address serious matters such as those emerging in Maesteg with the appropriate candour, accountability and willingness to properly report on and learn from mistakes, then they’re hardly making a strong case to take on a greater role and are probably threatening their long-term survival.