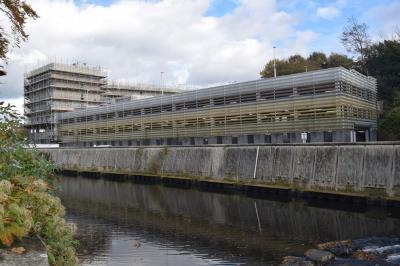 Here’s a round-up of some of the items on the agenda for Bridgend Council’s (BCBC) cabinet and full council meetings next week.

Obviously, the big local talking point at the moment is the rubbish collections, particularly missed collections….oops, Carwyn! Here’s a refresher of what he said in the Senedd on Tuesday.

There are questions due to be put to the cabinet next Wednesday (28th June) and if the meeting’s webcast I’ll return to it. It’s issues like this that prove the value of webcasting and what I’m sure would be record viewing figures – but it seems BCBC are quietly sidelining it and hoping nobody will notice.

First up, it’s one of Bridgend Labour’s manifesto pledges from May – to trial free car parking at council-run car parks.

BCBC is proposing what appears to be a 6-8 month trial at the Rhiw multi-storey car park which will last until March 2018. Drivers will be able to park for up to two hours free.

Part of the reason the Rhiw has been chosen for the pilot is its less than anticipated use – which is worrying for different reasons.

There’s a sting in the tail. BCBC are only able to pilot it because their budget settlement from the Welsh Government was higher than expected, so it’ll only last until March 2018 and can only be funded for a single car park.

The report says if the scheme is to be extended beyond next March, it will probably be down to the Bridgend Business Improvement District (CF31) and Bridgend Town Council.

More car parking news. Having run parking enforcement services in-house for three years, BCBC has determined that there are certain areas of the county which are too difficult for their 12 enforcement officers to patrol on foot, such as: bus stops, outside schools, pedestrian crossings and places where loading is banned.

Having the physical presence of an officer isn’t enough anymore, with drivers simply moving then re-parking once the officer has moved on. The proposed solution: a parking enforcement vehicle similar to the ones used by the police to catch speeding drivers – licence plates are captured and fines sent via post.

Two extra enforcement officers will be recruited. The vehicle and its associated costs will be £68,000. It’ll be clearly labelled as an enforcement vehicle and will ensure officers are able to cover a wider area.

The Welsh Government’s business rate relief scheme already covers small businesses but will be expanded for 2017-18 to cover a wider variety of high street retailers.

Shops, restaurants, pubs/clubs and cafes with a rateable value of £50,000 or less are eligible for the expanded scheme, with support ranging from £500 to £1,500. 449 business rate payers in Bridgend are expected to benefit, and application forms will be issued to eligible businesses by BCBC.

At the moment there are three ways local authorities can address anti-social behaviour by geographic area: gating orders (where a gate is provided and locked at a certain time), designated areas (where drinking alcohol in public is banned) and dog control orders.

The Crime and Policing Act 2014 will soon come into force and merges the three orders into a single Public Space Protection Order (PSPO). Each PSPO can deal with a wider range of anti-social behaviours.

At the moment, Bridgend County has 5 designated areas, one gating order (in Maesteg) and zero dog control orders. These will automatically become PSPOs in October 2017 and reviewed every three years afterwards.

BCBC intend to extend some of the existing PSPOs and, as a result, need to consult with South Wales Police, affected landowners and community representatives.

In terms of what BCBC are planning to change:
The total costs – including new signs, publicity etc. – are expected to be £6,000, with contributions sought from partner organisations (including, presumably, the police, relevant town councils and CF31).